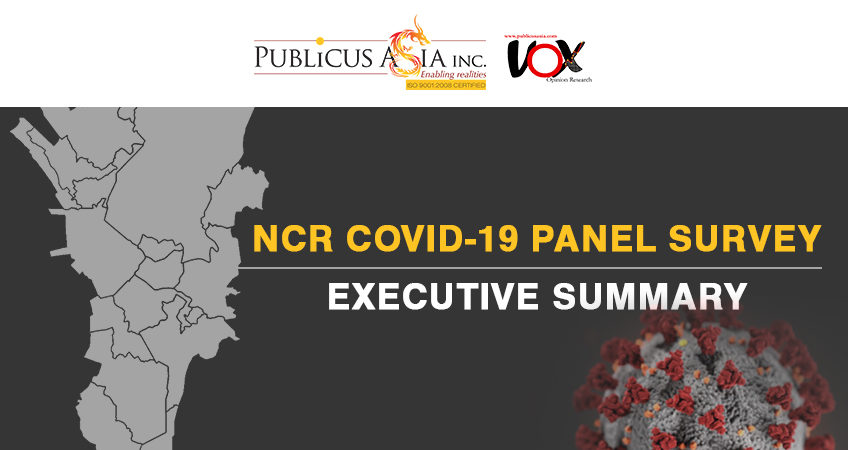 NCR COVID-19 ONLINE PANEL SURVEY is an independent non-commissioned survey conducted by PUBLiCUS Asia Inc. and VOX Opinion Research, its in-house strategic research arm. The sample consisted of 1,000 Filipino respondents aged 18-70 and residing in Metro Manila. The online panel was provided by Lightspeed Research through its Asia-Pacific headquarters in Singapore. The number of respondents per city is proportionate to the official population of the respective cities and municipality. Fieldwork was conducted online from April 2-6, 2020. The survey will be run weekly from this point on. 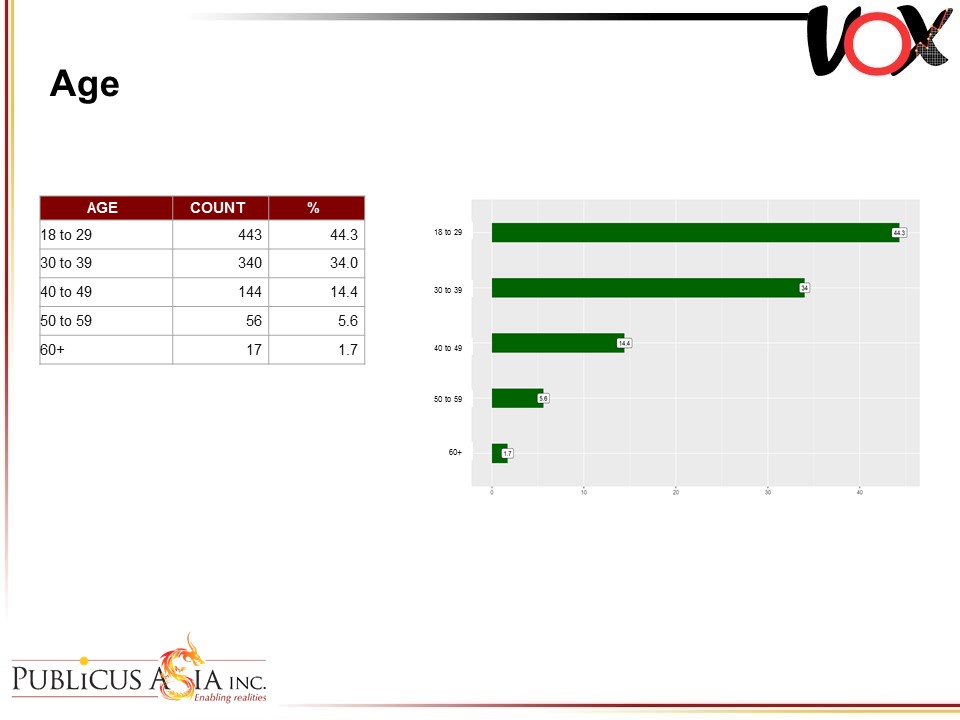 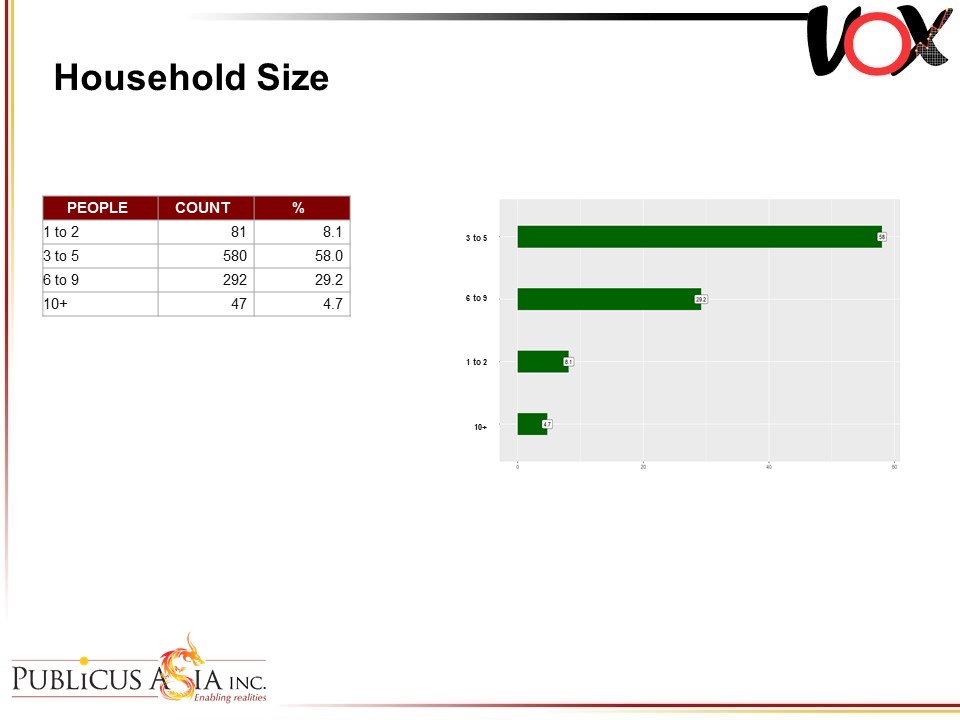 Most respondents (58%) live in a typical household with three to five members. Around a third of the panel (33.9%) live in large households with six or more members. Only 8.1% live alone or with just one other person. 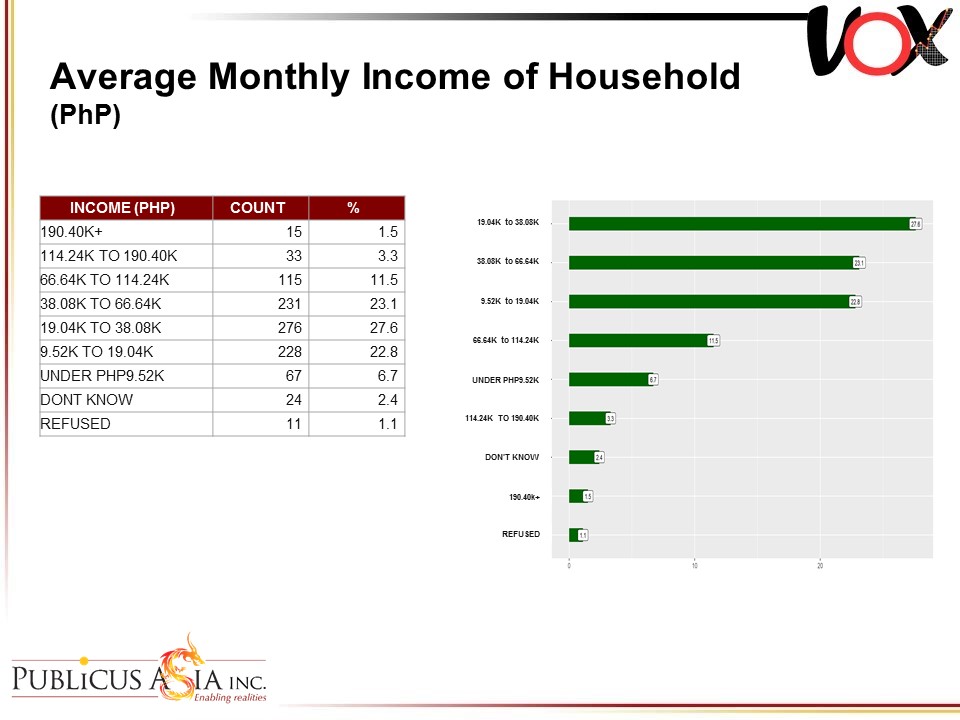 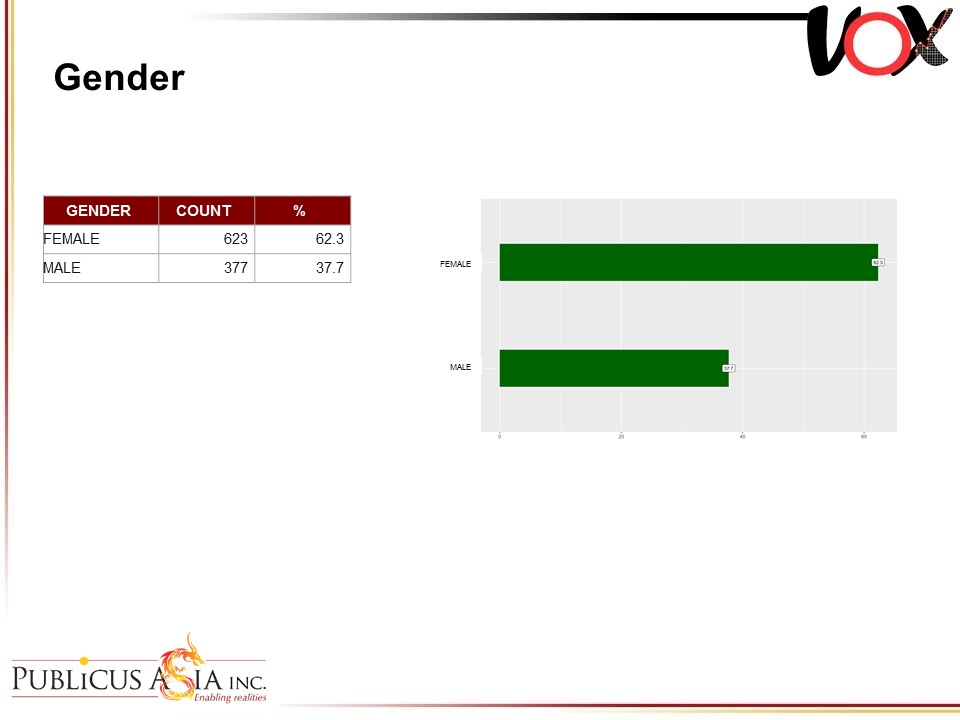 The panel has a significantly higher proportion of females (62.3% versus 37.7% male). 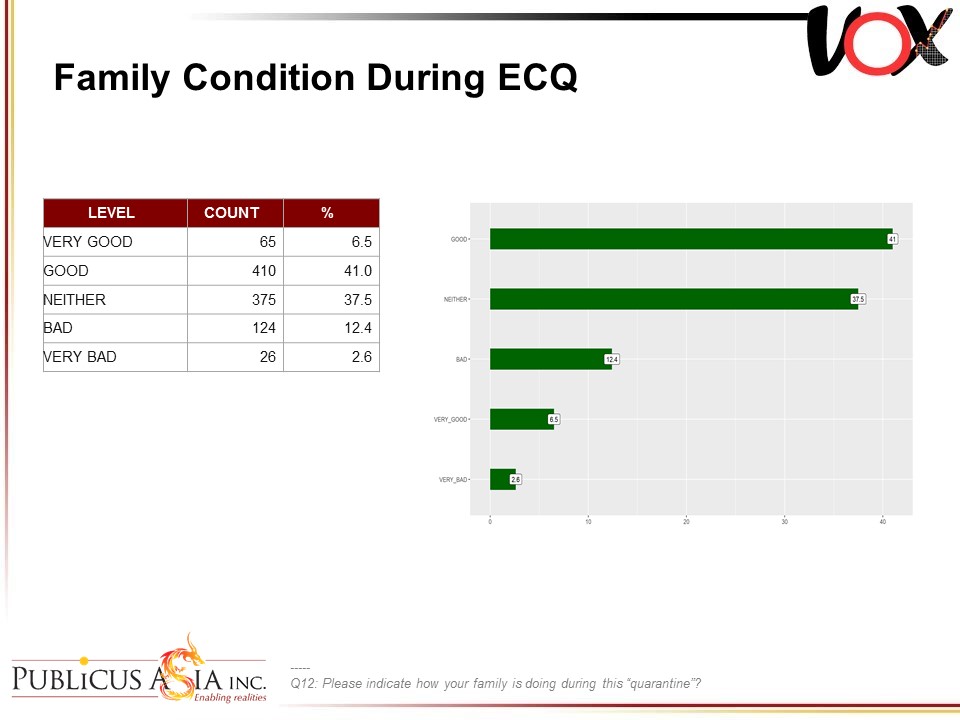 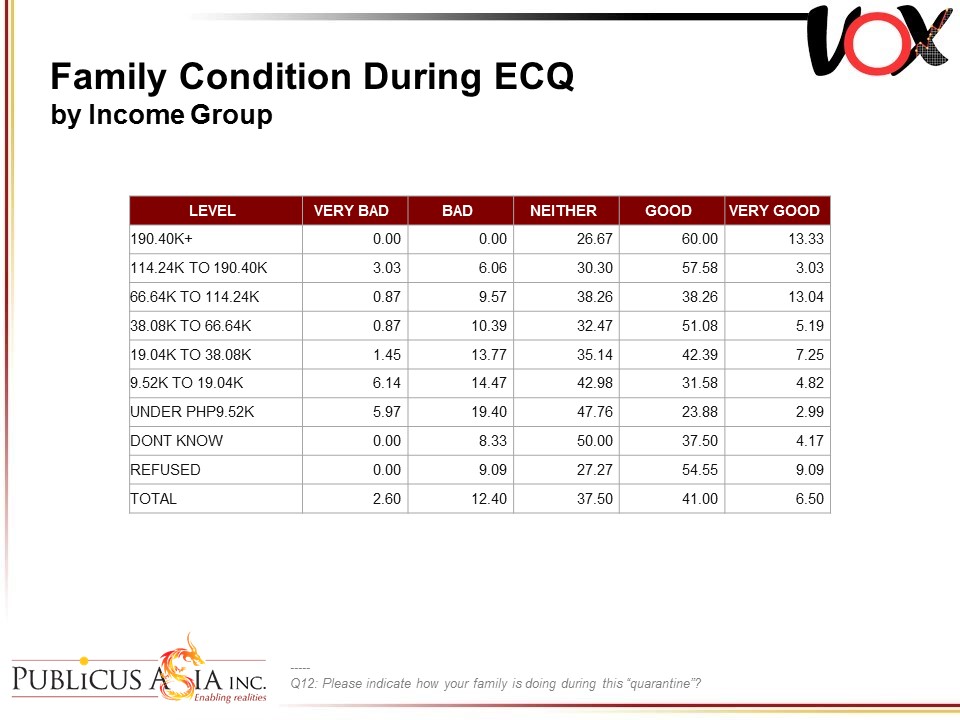 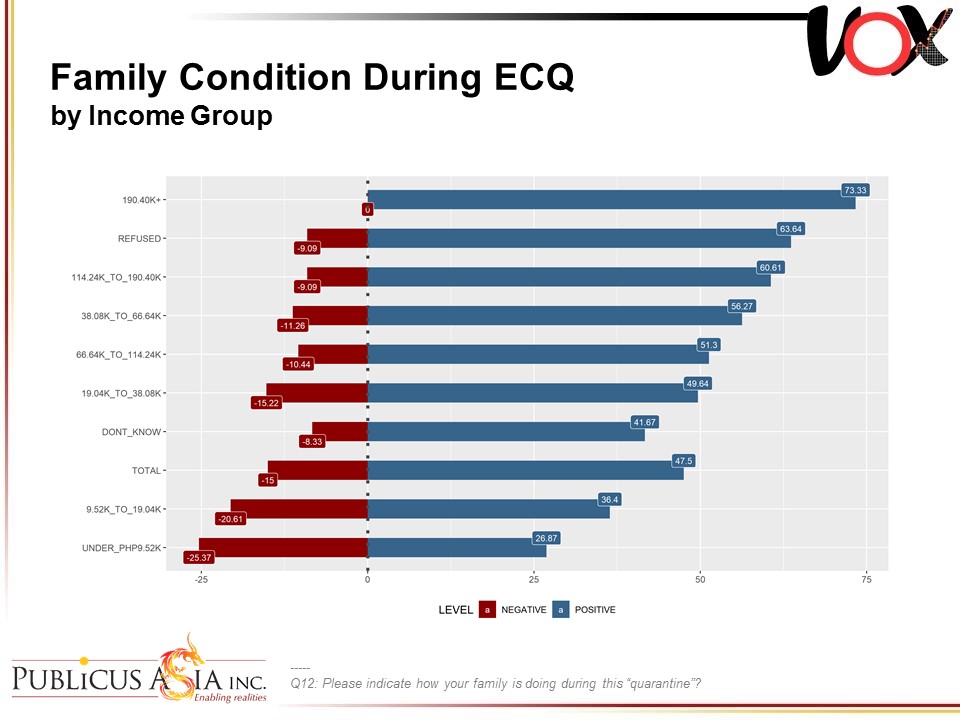 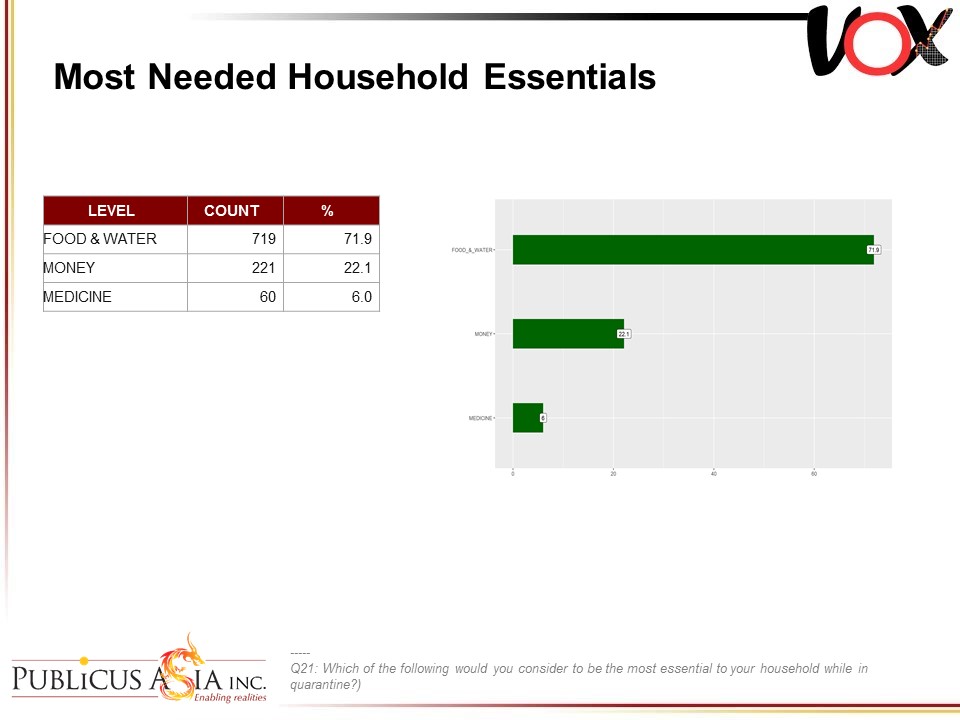 A large majority of respondents (71.9%) indicated that food and water were the most essential to their households during the quarantine, followed by money (22.1%) and medicine (6%). 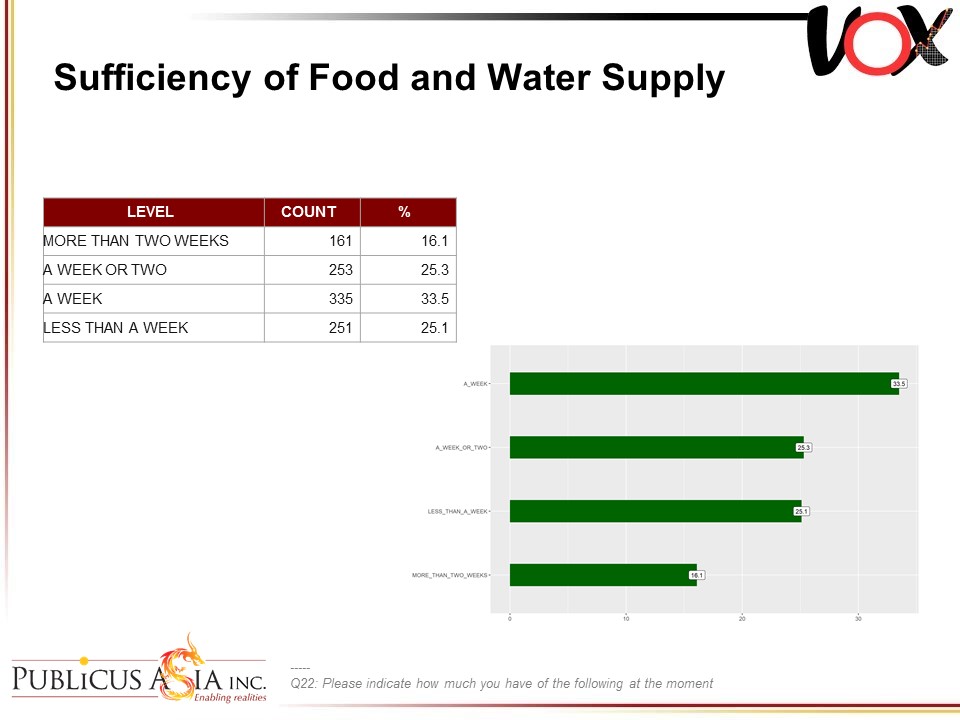 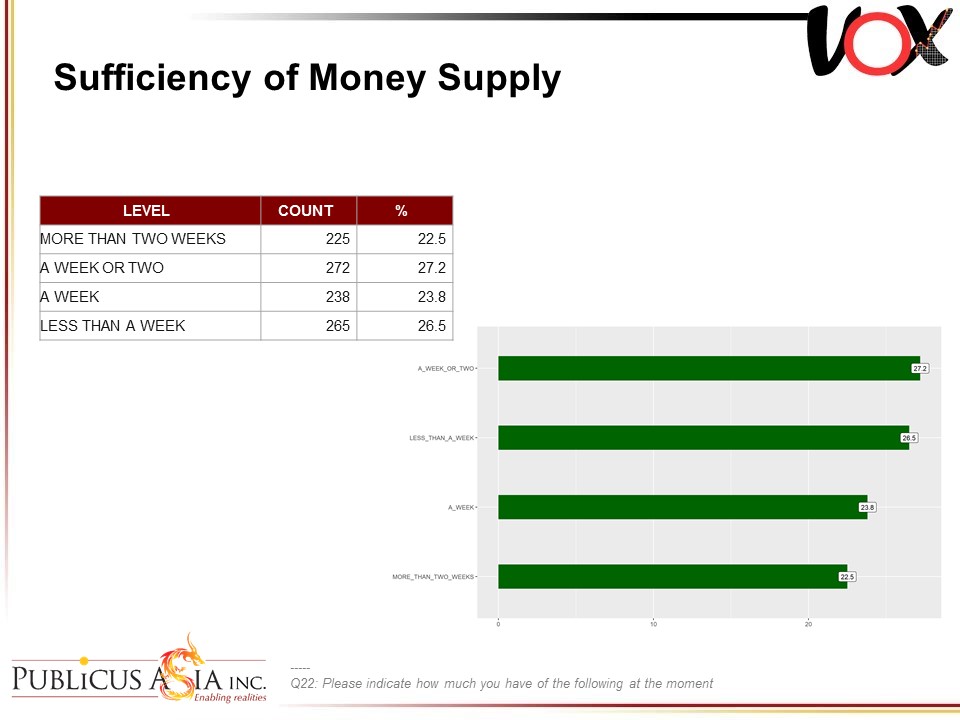 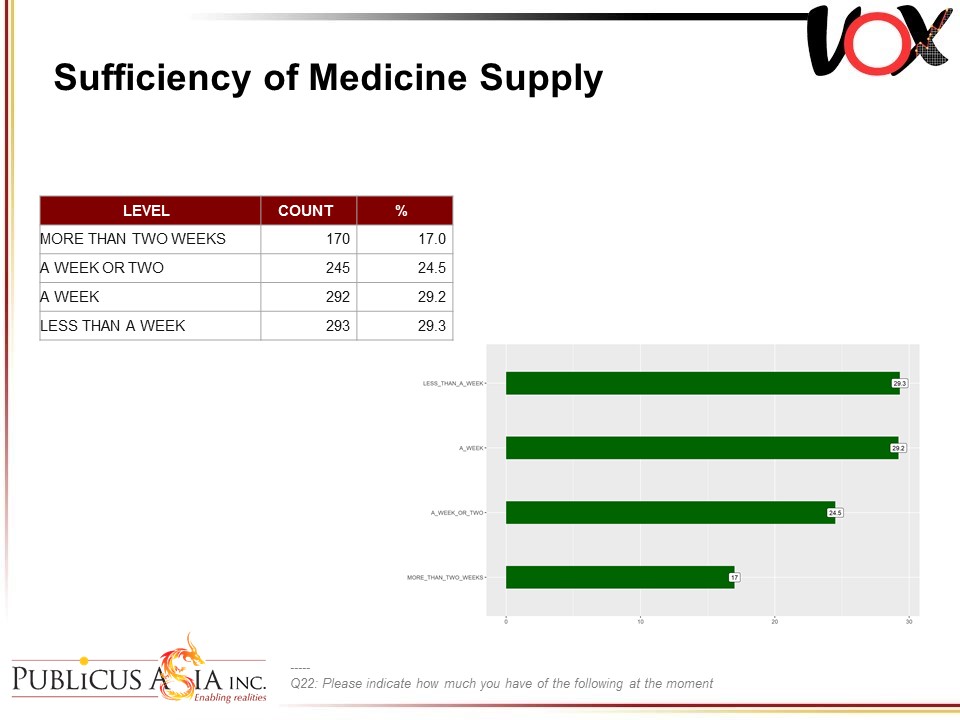 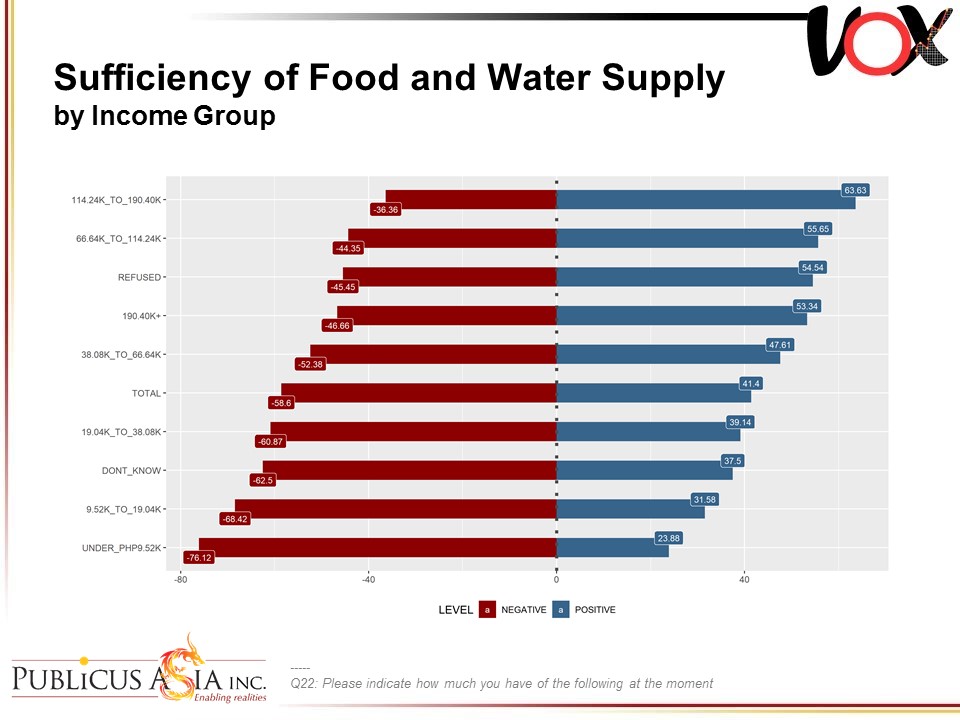 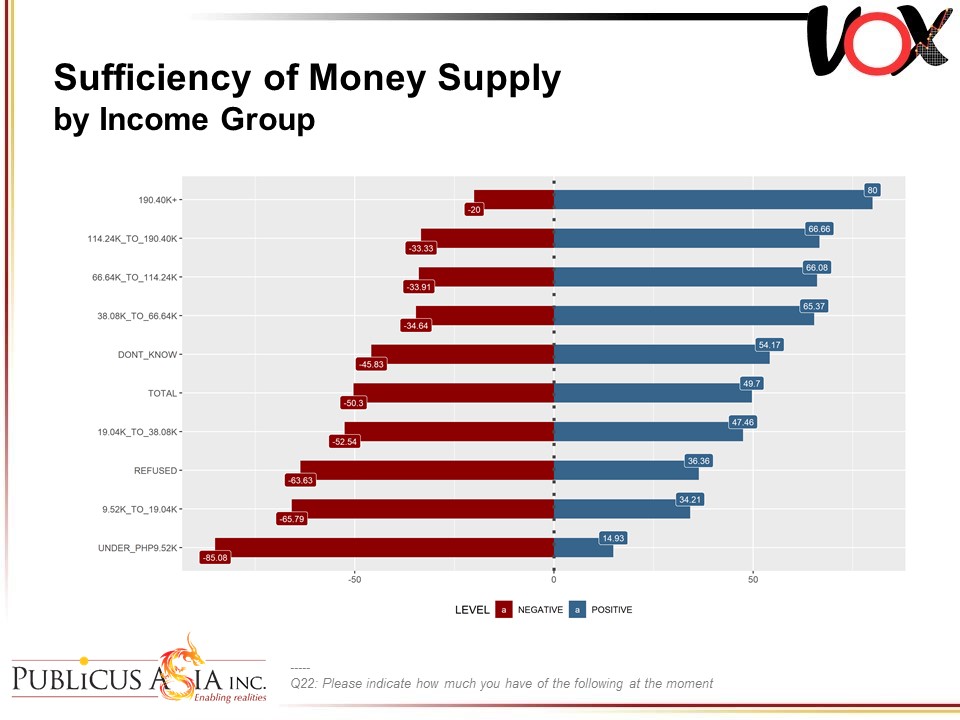 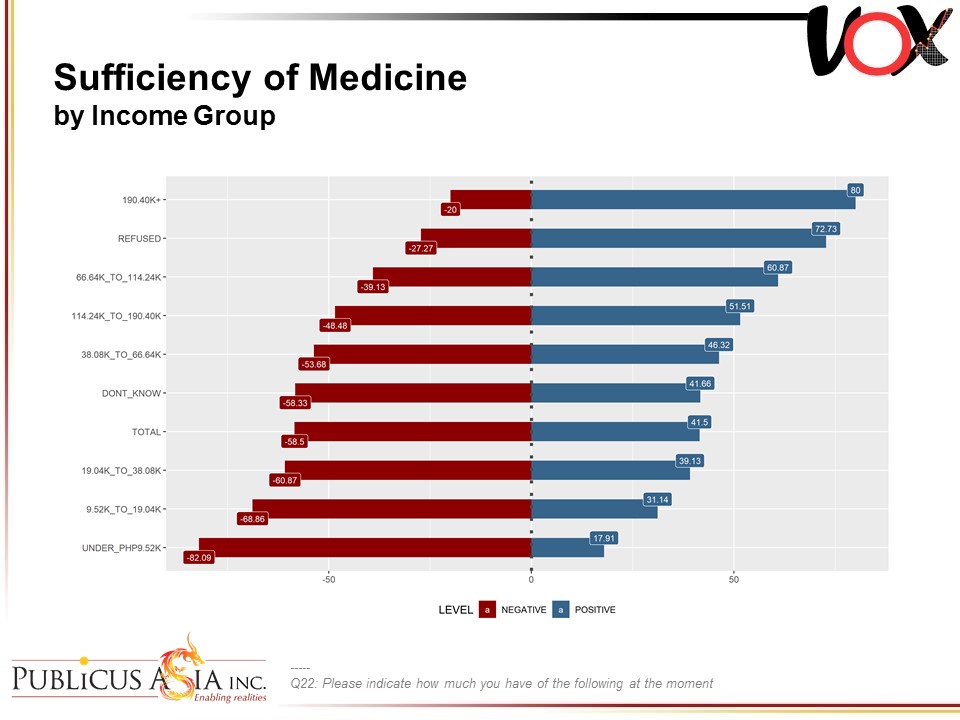 The Relative Strength Index for the sufficiency of basic household necessities supplies indicates that respondents from the three lowest income groups (P38,080 and below) reported less sufficient supplies of food and water, money, and medicine compared to the average among all income groups. 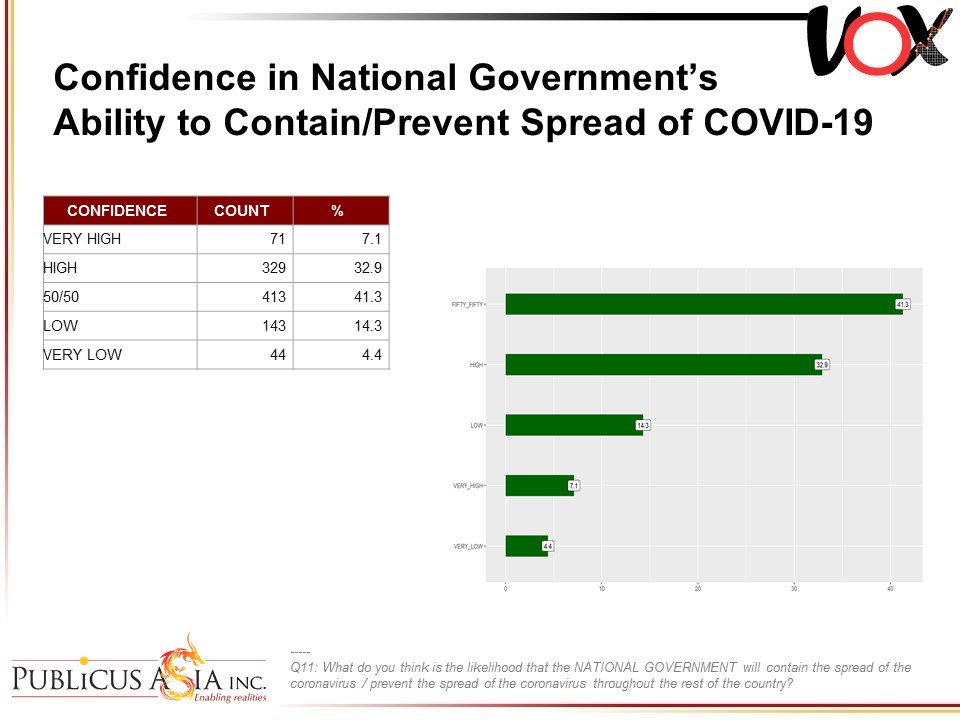 A plurality of respondents (41.3%) think there is only a 50/50 chance that the national government will be able to contain and prevent the spread of COVID-19 in the country. 40% of respondents answered that there was a HIGH or VERY HIGH chance that the national government would succeed in containing the pandemic. Only 18.7% had LOW or VERY LOW confidence in the government’s ability to prevent the spread of COVID-19. 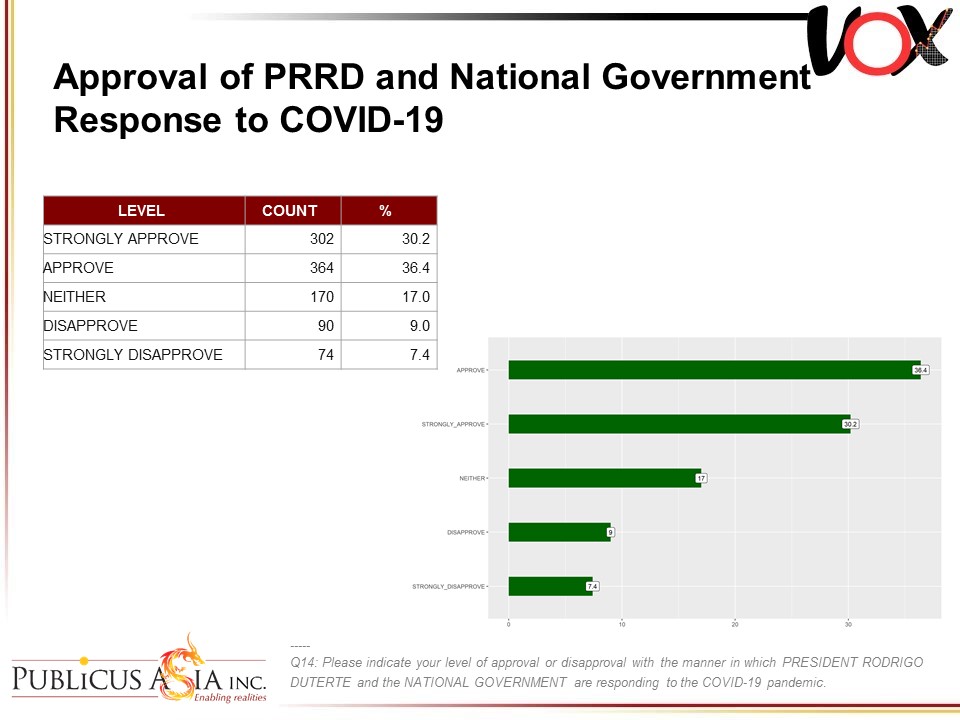 Two-thirds of respondents (66.6%) approve of the manner in which President Rodrigo Duterte and the National Government are responding to the COVID-19 pandemic. 17% neither approve nor disapprove, and 16.4% either disapprove or strongly disapprove.

Overall, the response of the President and the National Government to COVID-19 has a net approval of +50.2. Only the second and third-lowest income groups registered a net approval rating higher than the average at +65.36 and +56.89, respectively. 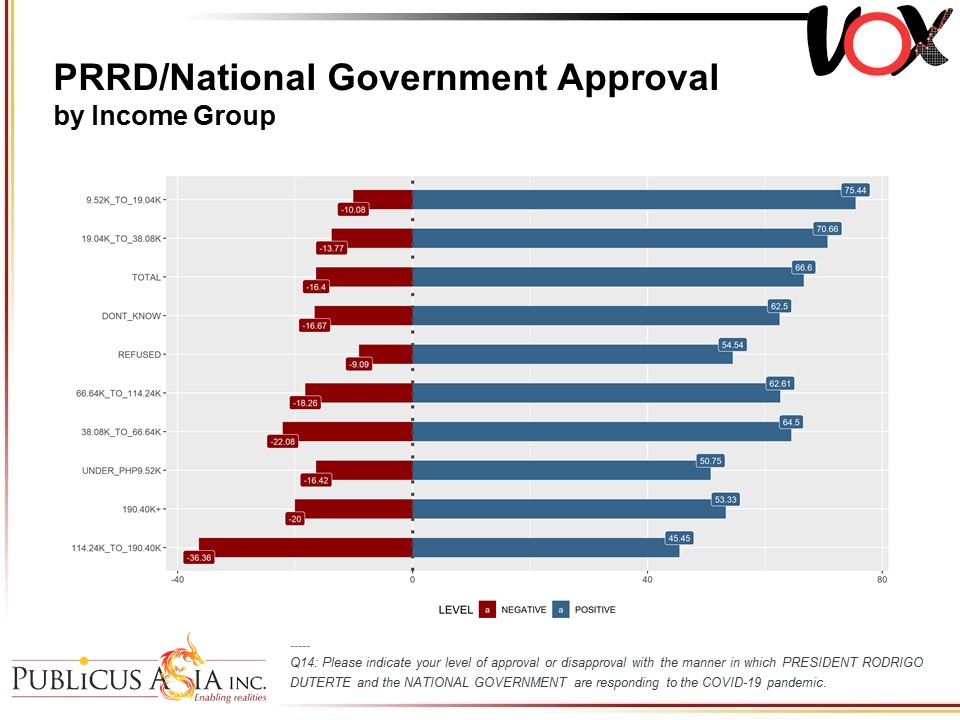 Department of Health and Secretary Duque 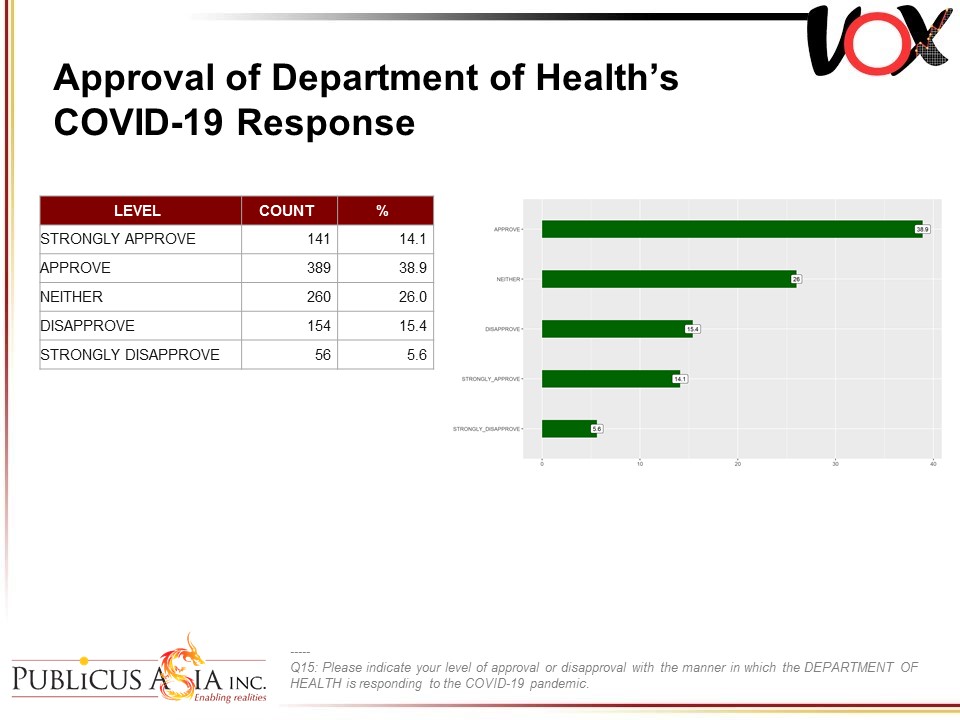 A slim majority of respondents (53%) approve of the Department of Health’s response to COVID-19. 26% neither approve nor disapprove while 21% disapprove. 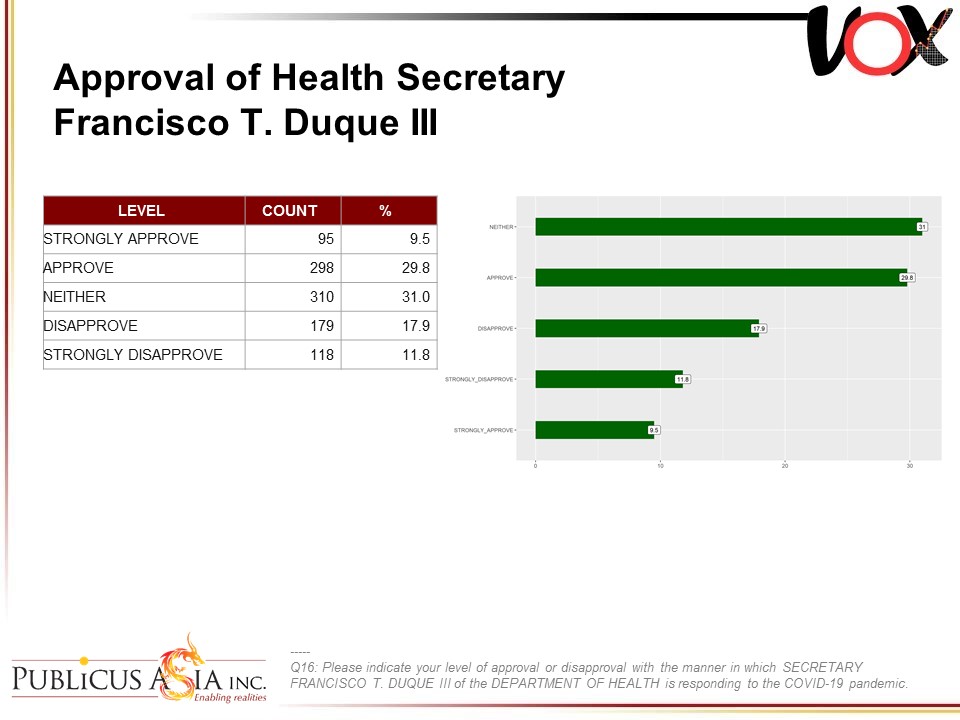 A plurality of respondents (39.3%) approve the response of Health Secretary Francisco T. Duque III to COVID-19. Almost one-third (31%) neither approve nor disapprove. More than one-fourth (29.7%) disapprove.

Senate and House of Representatives 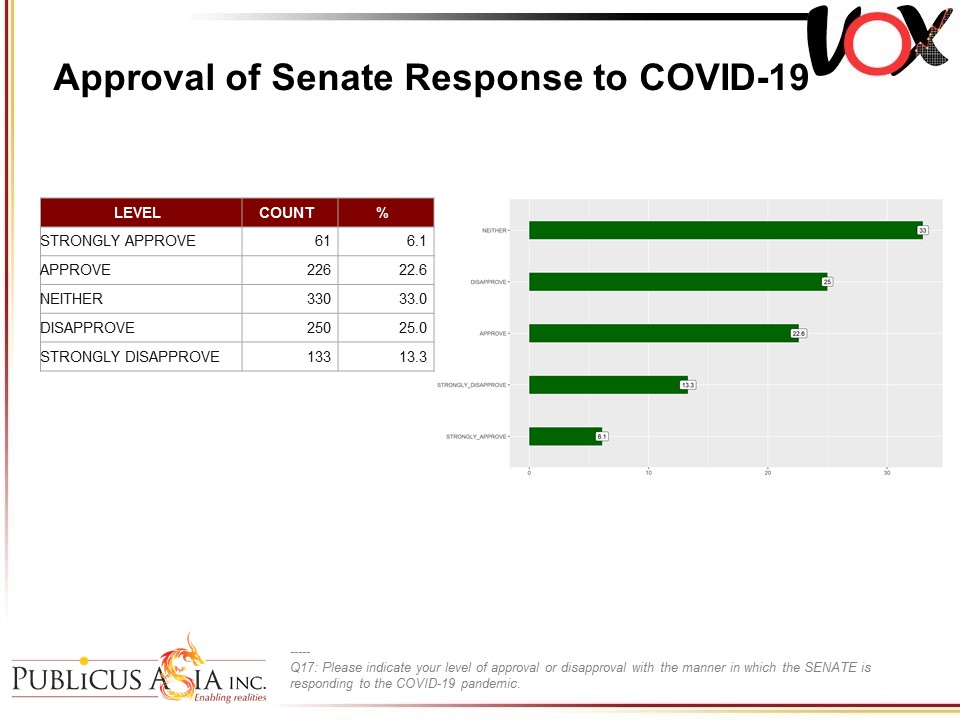 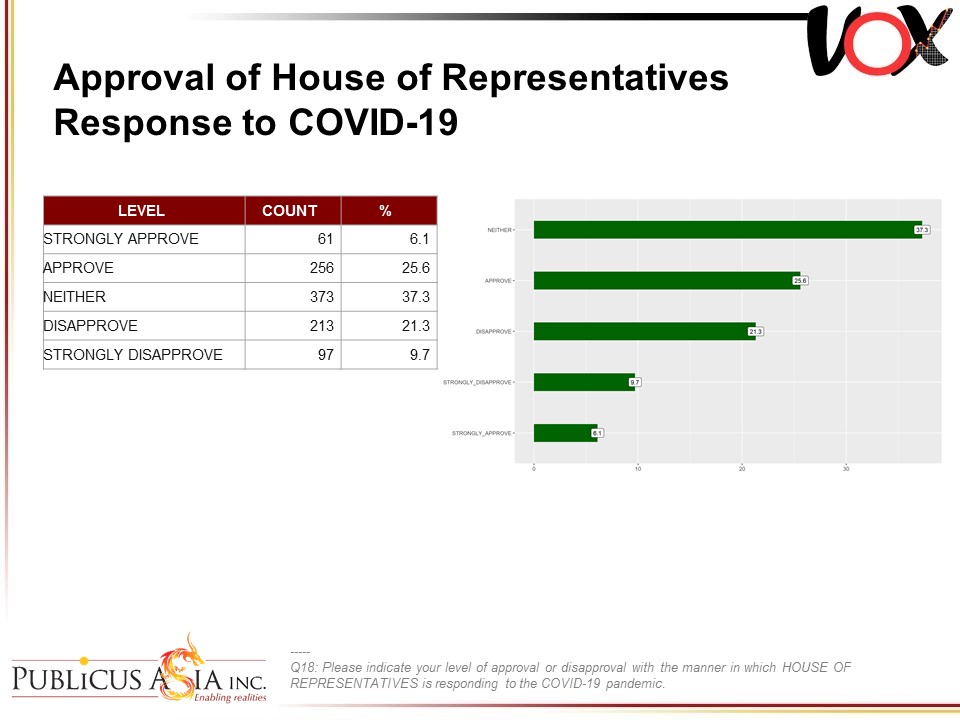 Meanwhile, respondents were divided over their perception of the House of Representatives’ response to COVID-19. A plurality of respondents (37.3%) neither approve nor disapprove. Their 31.7% approval rating had a slight edge over disapproval at 31%. 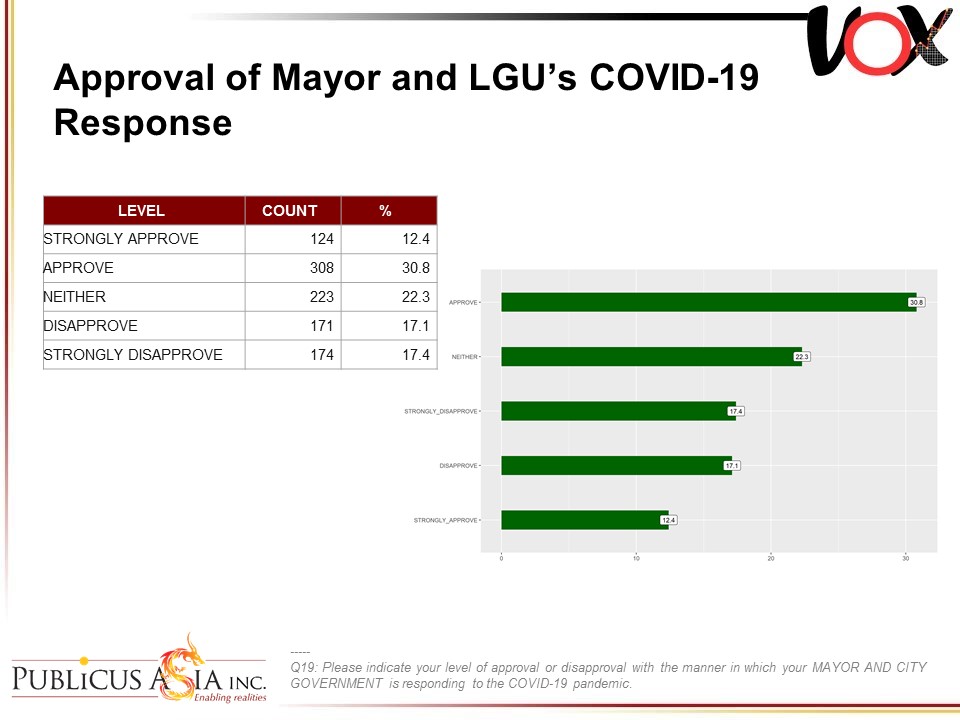 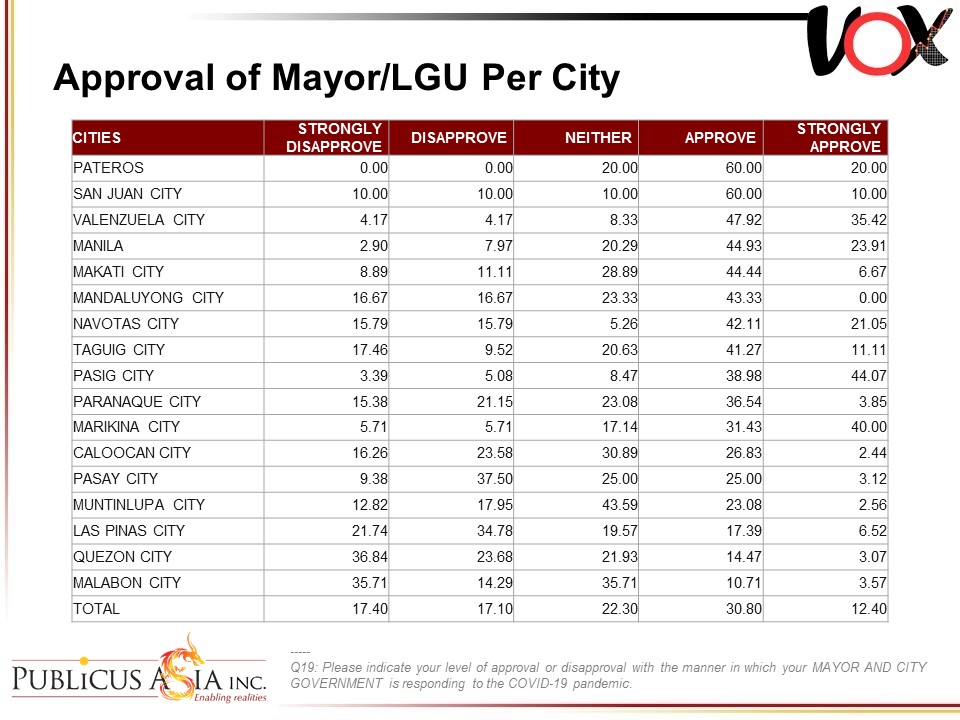 The following mayors and city governments registered the highest approval ratings among their respective constituents who participated in the survey: Rex Gatchalian of Valenzuela (83.34%), Vico Sotto of Pasig (83.05%), and Miguel Ponce III of Pateros (80%). 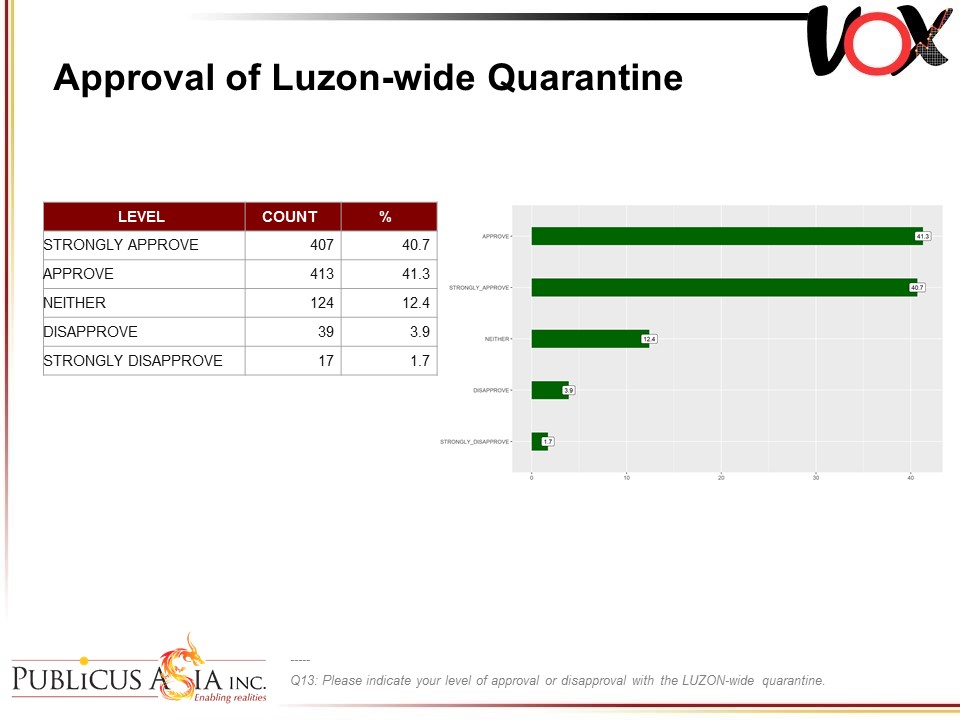 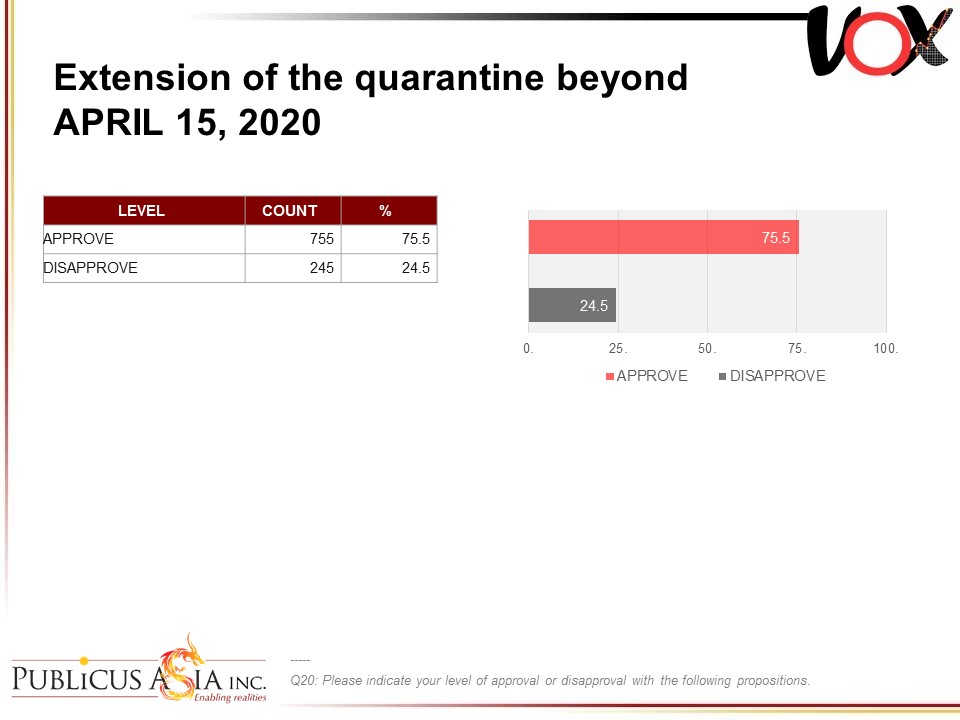 An overwhelming majority of respondents (82%) approve of the Luzon-wide Extended Community Quarantine as originally implemented, and three-fourths (75.5%) supported the extension of the ECQ past its original April 13 end date. 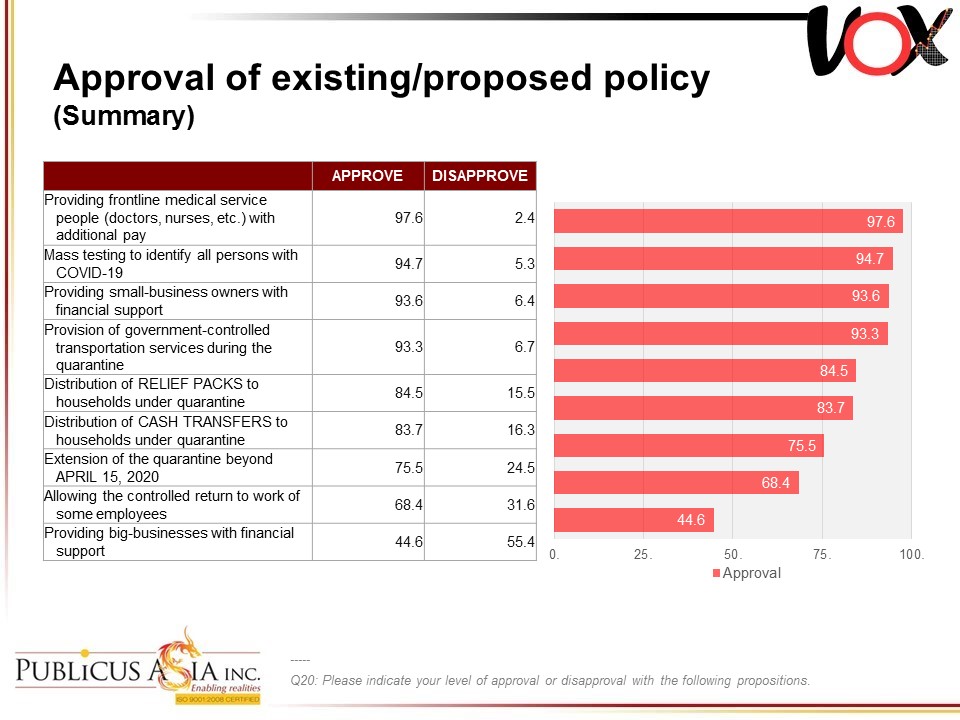 The survey listed an additional eight existing or proposed policies concerning COVID-19. Respondents overwhelmingly approved of seven of them: Providing frontline medical services people with additional pay (97.6%); Mass testing to identify all persons with COVID-19 (94.7%); Providing financial support to small business owners (93.6%); Providing government-controlled transportation services during the quarantine (93.3%); Distribution of relief packs to households under quarantine (84.5%); Distribution of cash transfers to households under quarantine (83.7%); Allowing controlled return to work of some employees (68.4%). 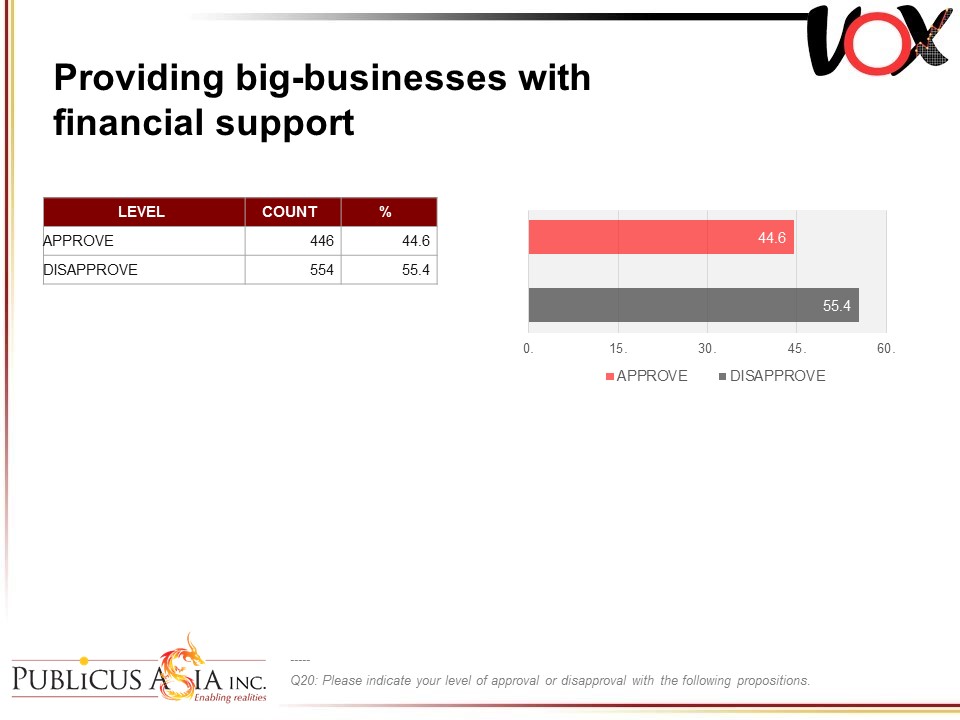 However, a majority of respondents (55.4%) expressed disapproval to the proposal to provide financial support to big businesses.

Register to download the complete deck with tables and charts