No single step toward Federalism 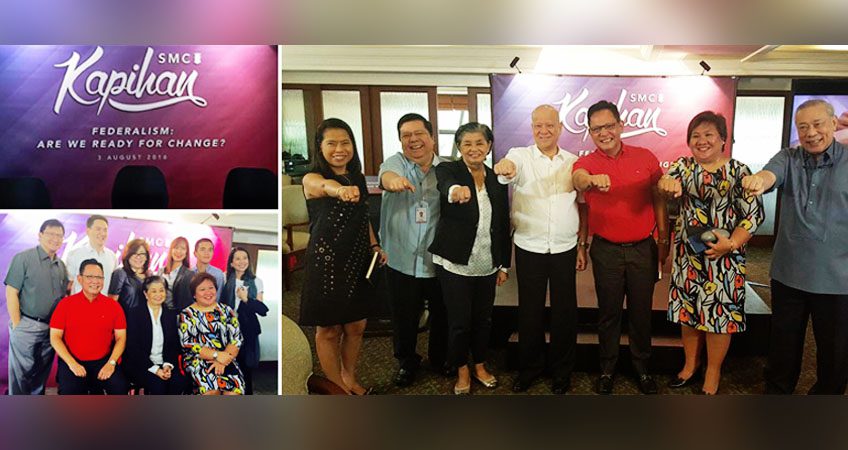 A shift to Federalism is not just a single-step procedure, but rather an arduous process that involves revisions in the current constitution, PUBLiCUS Asia, Inc. Founder and Chief Executive Officer Ma. Lourdes N. Tiquia said.

In a forum hosted by San Miguel Corporation (SMC) titled “Parliamentary-Federal System of Government: Are We Ready?” last August 3, Tiquia explained that changing the system of government to Federal Republic requires political reform that will make 60 percent of Philippine provinces and component cities “Autonomous Territories” through an enacted organic law that will define their land area, powers, obligations and sources of revenues.

Tiquia added that a federal system of government demands an environment conducive to political, economic, social and cultural development through effective and accountable political and social institutions, the emergence of real member-based and ideologically-anchored political parties, and participation of informed, responsible and empowered citizens in governance and development, among others.

Tiquia also emphasized that for federalism to work, there must be an effective representation of the people. She noted that an inclusive, multi-stakeholder deliberation must be considered and an intensified information campaign on federalism and the Constitution to allow people in making an informed choice must happen when pursuing constitutional changes. Most importantly, Tiquia said the political landscape must be fixed through abolishing political dynasties, instituting campaign finance reform, seeking political party reform and overhauling the COMELEC.

SMC organized the ‘kapihan’ to inform its executives and staff on today’s pressing issues. The other speakers were Atty. Raul Lambino, Managing Partner of R. Lambino & Partners and Dr. Claire Carlos, Executive Director of the Center for Political and Democratic Reform who shared their comments and insights on federalism.