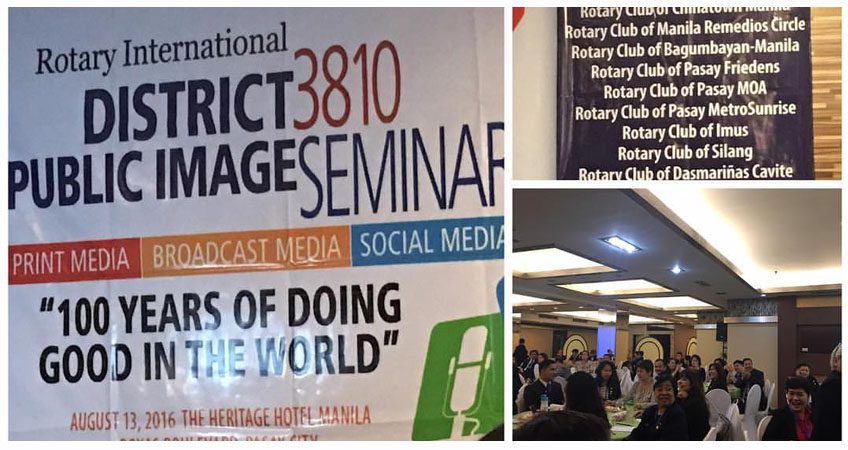 PUBLiCUS Asia Founder and Chief Executive Officer Malou Tiquia argued for the importance of selling good stories and upholding integrity in communication amid today’s crowded and cluttered information landscape.Are you having a financial problem?

In her keynote speech before members of the Rotary Manila Midtown last August 13, Tiquia scrutinized the media’s apparent preference to negative over positive news and questioned its adversarial leaning as a means of attracting audience and increasing profit.

“There is buzz if one is killed, hit, maimed, raped, etc. But talk about a kid who is dirt poor but finished college at the top of the class – That’s just a footnote. Talk about a single mother sending her four kids to college by doing laundry and be the proudest person when they graduate – That’s just a blip,” Tiquia said.

Tiquia furthered by saying that the art of effective communication is about telling truthful stories – that good storytelling necessitates a good storyteller. “How to tell a story is easy to answer. Because there are more channels today than ever before. There are narratives but we need good communicators with integrity, with the best skills for storytelling, as well as the ability to listen and not just hear.”

Tiquia also called for a better understanding on the changing media landscape especially due to the ascendency of the new media, which brings several opportunities and challenges to the way institutions and individuals communicate.

“New media is fast and furious. Fast, because it is streamed and furious, because one needs to double check sources.”

In relation to carrying the Rotary brand, Tiquia drew a fine line between reputation and character, saying that institutions should not only limit image building in terms of reputation but must also work on value formation as character is the bedrock for building strong institutions.

Tiquia closed her speech by stressing that authenticity is key – that good storytellers know how to narrate stories that create emotional connections with their audiences—stories that inspire, enchant and motivate people.

“How to tell good news is like communicating your humanity. The more human you are willing to be (not perfect, not an expert, not a superhero) the more likely it is that people will connect with your story.”

Tiquia was the keynote speaker at the Rotary International District 3810 Public Image Seminar titled “100 years of doing good in the world” hosted by the Rotary Club of Manila Midtown in celebration of the foundation’s centennial.