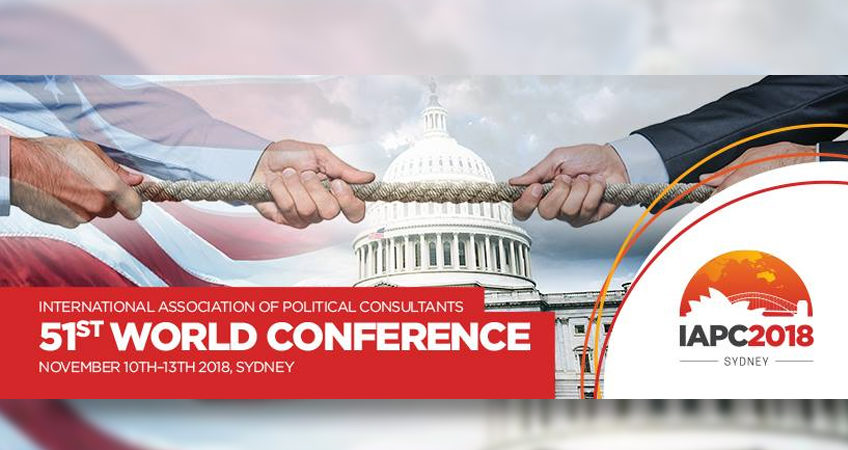 For the second time in consecutive years, PUBLiCUS Founder/CEO, Malou Tiquia, presented to the members of the International Association of Political Consultants an overview of key ASEAN elections during its 51st World Conference in Sydney, Australia.

Tiquia led the second day session on Campaigns Around the World and covered six (6) ASEAN nations from Malaysia and the historic victory of Mahathir; Myanmar on the loss of Aung San Suu Kyi’s party; the building of a new Shinawatra-associated party in Thailand and its new constitution and scheduled elections in February; the succession in Singapore; the coming general elections in Indonesia and the midterm elections in the Philippines.

She introduced ASEAN and the ten (10) member countries and the relevance of the five (5) founding members in the regional organization. These five were: Philippines, Indonesia, Malaysia, Thailand and Singapore. Tiquia likewise distinguished Western democracy from Asian democracy and why a different metrics should be used in reviewing the growth of democracy in the area.

Her key takeaways in the panel were, “succession is becoming more real with leaders getting older and majority of voters getting younger, more and more campaigns are focused on millennials (leaders and voters), combination of online and offline activities are crucial and the power of crowds are still images that are becoming more felt with technology and the impact of visual narratives.” She further stressed that “populism may not be understood well using the lens of liberal democracy but it is real and to some degree, it is more nationalism than what has been characterized as populist politics.” Tiquia elaborated on authenticity in the age of unfiltered news and that the Malaysian tsunami may just be felt in the various jurisdictions in the region that will have general elections next year. “Still, it is economy, economy, economy but add disaster management as key issues that frame campaigns in the region.”

Tiquia was the only female and only Asian in the panel made up of former IAPC presidents: Sepp Hartinger (Australia on EU elections), Bo Krogvig (Sweden) and Voker Rigger (Germany). The panel was moderated by Faye Diamond of RBi Strategies (USA), the Secretary General of IAPC.

In the previous year, Tiquia talked about the impact of populism in the Philippines with the election of President Rodrigo Roa Duterte in Rejavik, Iceland. Tiquia is the secretary-general of the Association of Political Consultants in Asia. PUBLiCUS is a 15-year-old political consulting firm based in Manila and operating in ASEAN.