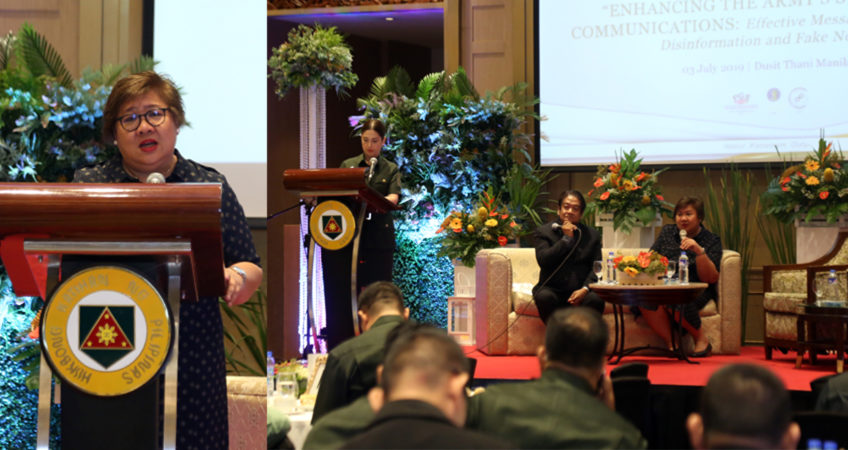 With the theme “Enhancing the Army’s Strategic Communication: Effective Messaging in the Era of Disinformation and Fake News,” PUBLiCUS Founder and Chief Executive Officer, Ma. Lourdes N. Tiquia launched the Philippine Army’s Gat Andres Bonifacio Colloquium yesterday by highlighting before the officers of the Philippine Army and other units of the Armed Forces of the Philippines that the dynamics of power has changed and operating by silos is “no longer the way to communicate to the audience.” The command control approach may be good at the operational level “but remember, the people on the ground have a different narrative from those in Camp Aguinaldo.”

Tiquia stressed that in putting together strategic communication or what is commonly termed in the military parlance as Information Operations (IO) would need a keen understanding on the dynamics of power today. She pointed that “digital natives view things differently from digital immigrants; citizens are now content creators, media is no longer the gatekeeper; if the news arc was 24/7 before, today it is first-to-break; EQ is more essential than IQ this empathy rules; organic is authentic but there are online influencers who uses tactics to boost posts and often these are bot farms and turbo-booster apps; from tri-media to quad media and often times broadcast monitor online conversations, often looking out for trending topics and messaging in the era of hashtags.”

Invoking the principles of the Great Revolutionary, Andres Bonifacio, “he was well loved and respected because he lived in the community, was one of the people and he showed a lot of empathy.” Tiquia talked about four (4) domains of conflict that the Army holds clear: social, cognitive, information and physical domains. The intersection of all domains is what is commonly called the Network Centric Warfare (NCW) or the Information Age Warfare. The fifth that Tiquia added, which is also a debated topic in the military in the inclusion of the Cultural Domain. She stressed that most of the nuances emanate from cultural differences. “Imagine if this is not integrated in your IO, you will have a problematic Combined Information Overlay (CIO) and that will have a dangerous impact in your operations.”

Tiquia likewise distinguished the types of false information from disinformation to misinformation; satire and propaganda (manipulative and persuasive) and why fake news goes viral. She cautioned the Philippine Army hierarchy on the issue of connectivity. “47% off the population is not connected. “You are confronted with hybrid threats and most are urban-based, so if the terrain is such, the Internet and social media are tools that you need to embrace and adapt. Internet penetration is at 63% for an active social media users at 67 Million; unique mobile media users penetration is at 58%, with active mobile social users at 62 Million.” One fact that the Army should consider is “the Philippines is the number one country globally that spends on the average 10 hours and 32 minutes per day using the internet via any device.”

The Army cannot be a “legacy institution. It should shun the old norms and adapt to innovation and we are not even talking Defense 4.0 here,” added Tiquia.

Tiquia was joined by Mr. Bong Osorio, marketing guru, Philippine Star columnist and former president of the PRSP as reactor. The open forum was moderated by Ms. Pia Roces Morato, a reservist and adviser on Dismiss Disinformation Campaign of the Presidential Communications Operations Office (PCOO).