MANILA – The results of an independent non-commissioned survey of 2,000 registered voters in Visayas and Mindanao indicate that two-thirds of VisMin residents are not aware of the ongoing push for a shift to federalism, an oversight which the polling firm’s spokesperson says has prevented federalism advocates from unlocking pivotal grassroots support from their most likely allies.

According to the results of PAHAYAG VisMin 2019, an independent non-commissioned survey conducted from November 15-19, 2019, 66.3 percent of poll respondents said they have not heard any information about the proposed shift from a unitary form of government to a federal form. Only 14.3 percent of respondents said they ‘understand a lot’ about federalism, while an additional 16.4 percent said they ‘partly understand’ the issue. 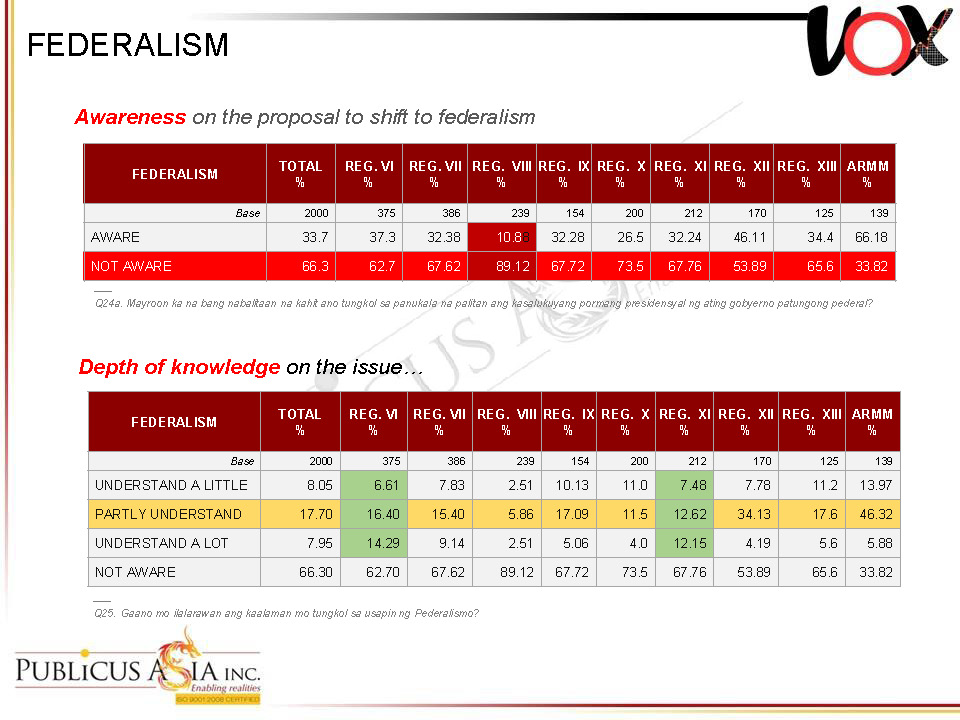 The survey results were released by consultancy firm PUBLiCUS Asia, Inc. after processing and analysis by VOX Opinion Research, PAI’s dedicated data science arm founded in 2007. The poll has a margin of error of +/- 2.19 percent.

Mr. Aureli Sinsuat, PAI Executive Director and spokesperson, said he was surprised with the low awareness of federalism in Visayas and Mindanao.

“Mindanao is the epicenter of the Philippine federalism movement. Many of federalism’s foremost proponents, including the late Senator Nene Pimentel and President Duterte, hail from Mindanao. Federalism has been perceived as popular in Visayas and Mindanao because it has long been floated as a concrete solution to the political marginalization felt by Visayans and Mindanaoans in what they perceive to be a Manila-centric national government. Apparently, however, federalism advocates have not been able to mainstream their advocacy into the consciousness of Visayans and Mindanaoans,” Sinsuat said. 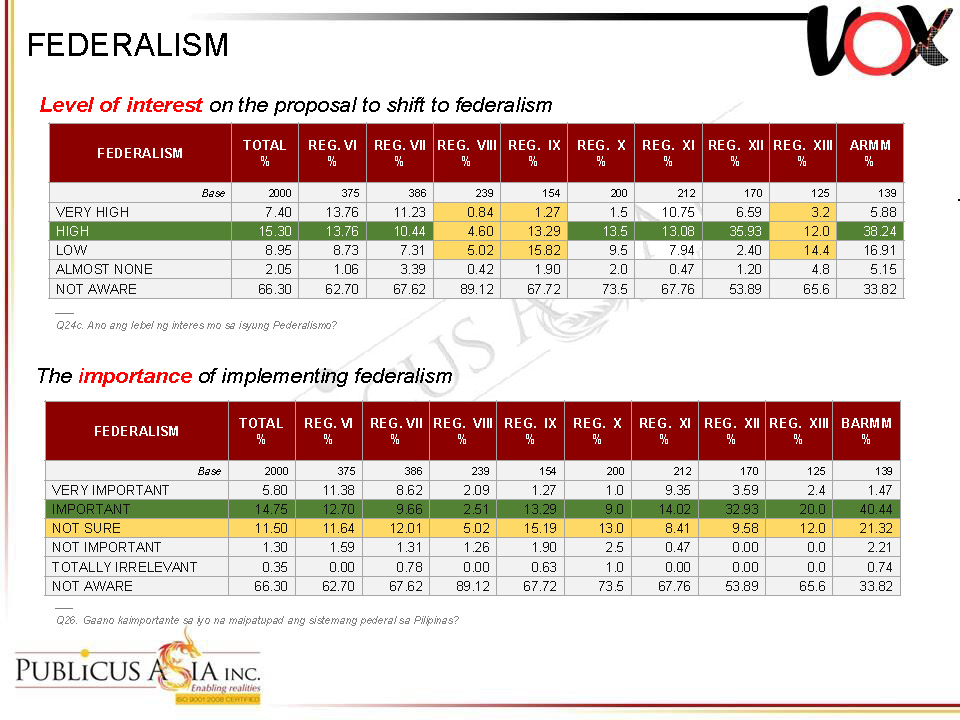 “The data clearly shows that Visayans and Mindanaoans are the most logical and likely supporters of federalism. The problem is that such a large number of them have not even heard of federalism and its potential benefits for towns and provinces far away from the national capital. The fault lies squarely on the shoulders of federalism advocates for failing to unlock pivotal grassroots support from their most likely potential allies,” Sinsuat said.

Admitting that a shift to federalism by the end of President Rodrigo Duterte’s term seemed highly unlikely at this point, Sinsuat asserted that the fate of federalism in succeeding administrations would largely depend on how effectively federalism supporters could educate their fellow citizens at the grassroots level.

“The more Visayans and Mindanaoans learn about federalism, the more they seem to support it. There’s still a window of opportunity for federalism advocates to win the hearts and minds of the people in the coming years. But they do have their work cut out for them,” he said.