According to the first major 2022 pre-election poll made available to the public today, Visayan and Mindanaoan voters would choose Davao City Mayor Sara Duterte-Carpio and incumbent President Rodrigo Duterte as a Daughter-Father tandem for President and Vice President if the elections were held today – a first in Philippine politics if it were to happen.

The results were gathered from PAHAYAG VisMin 2019, an independent non-commissioned survey conducted from November 15-19, 2019. The respondents of the survey were 2,000 registered voters chosen at random among residents of Visayas and Mindanao.

“The results of this poll indicate that the Duterte brand might be even stronger in their Mindanao bailiwick and in the Visayas than we originally thought,” said Mr. Aureli Sinsuat, PAI Executive Director and firm spokesperson. 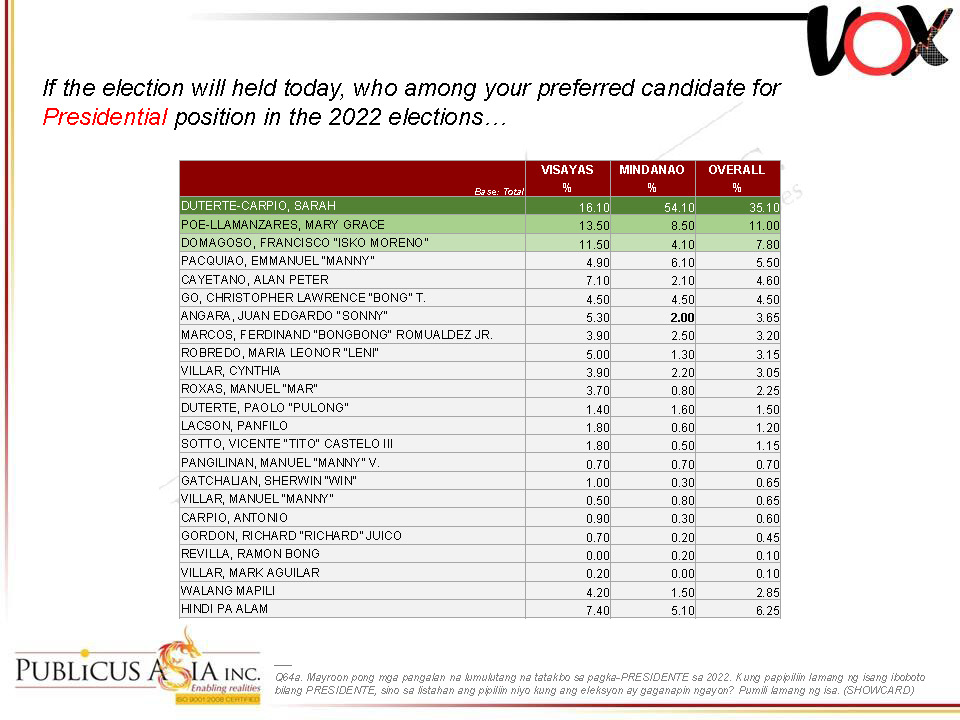 The poll has a margin of error of +/- 2.19 percent across the entire survey population and +/- 3.1% within the respective Visayas and Mindanao clusters.

Sinsuat noted that while Duterte-Carpio garnered a whopping 54.1 percent of the vote among Mindanaoan respondents, the race was too close to call in Visayas. 16.1 percent of Visayan respondents chose Duterte-Carpio, 13.5 percent chose Poe-Llamanzares, and 11.5 percent chose Domagoso. With a cluster margin of error of +/- 3.1%, this means that the top three choices for President in the Visayas are statistically tied.

“Mindanao only has a 2-percent advantage over Visayas in terms of overall voting population, with 23 percent of total voters nationally registered in Mindanao versus 21 percent registered in Visayas. Despite this, however, the overwhelming preference for Mayor Duterte-Carpio among Mindanaoan respondents essentially nullified the tight results in Visayas,” Sinsuat said.

“Mindanaoan voters catapulted President Duterte to the presidency in 2016. This goes to show that a united Mindanao voting bloc is a force to be reckoned with in the 2022 elections,” he added. 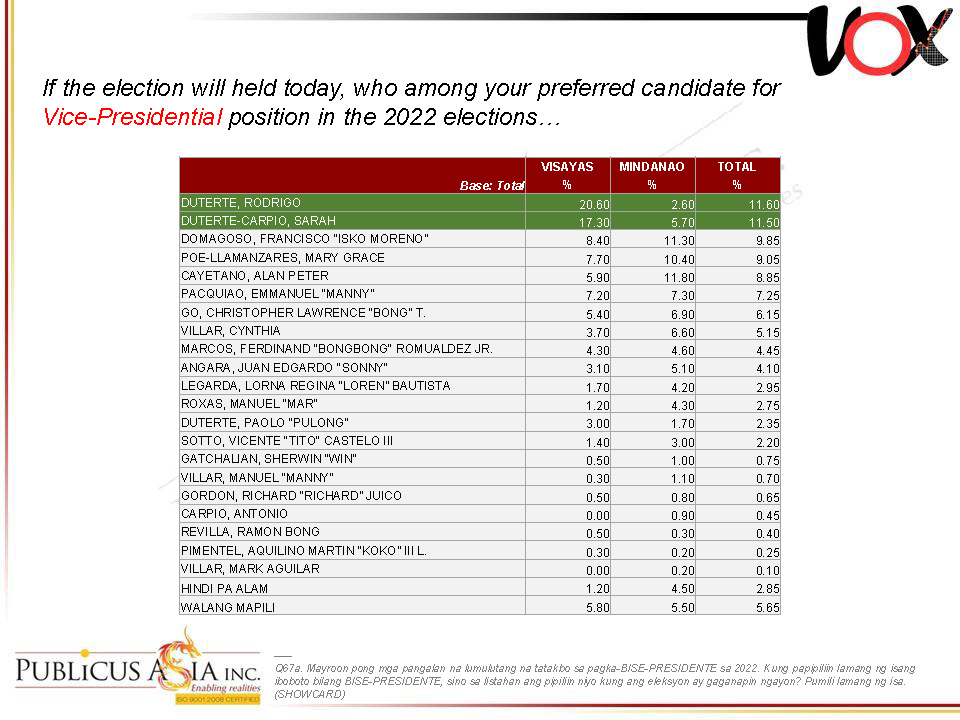 When asked to choose their preferred candidate for Vice President among a list of 21 potential candidates in the 2022 elections, VisMin survey respondents were torn between incumbent President Rodrigo Duterte and his daughter. The President and Duterte-Carpio garnered 11.6 percent and 11.5 percent of the vote each in a virtual dead-heat.

However, Sinsuat said the inclusion of both President Duterte and Duterte Carpio on the vice presidential list ended up making the results look closer than they would have been in reality.

Sinsuat also said he thought it was highly unlikely for President Duterte to run for Vice President in 2022.

“The President has been vocal about his intention to retire from national politics and get some rest after his term ends in 2022. I doubt he would actively pursue six more years of stress as the second-highest official in the land,” he said.

“Nevertheless, we cannot completely discount the possibility of the President’s loyal and persistent supporters attempting to persuade him to stick around after 2022. The numbers from the PAHAYAG VisMin survey make it plausible that we might see the same sort of grassroots ‘Draft Duterte’ movement we saw in 2016, a second time around,” he added.

While he admitted that a presidential pre-disposition survey focusing on Visayas and Mindanao would naturally report a strong showing for the Dutertes and their allies, Sinsuat also pointed to the impressive showing of two potential 2022 candidates who are neither close Duterte allies nor have strong ties to the area: Senator Poe-Llamanzares and Mayor Isko Moreno Domagoso.

In addition to the traditional ‘choose only one for president and vice president’ questions, PAHAYAG VisMin also asked respondents to rate their likelihood of voting for each of the 21 individual candidates listed. The choices provided were Likely to Vote, May Vote or May Not Vote, Likely Not to Vote, Surely Not to Vote, Don’t Know. 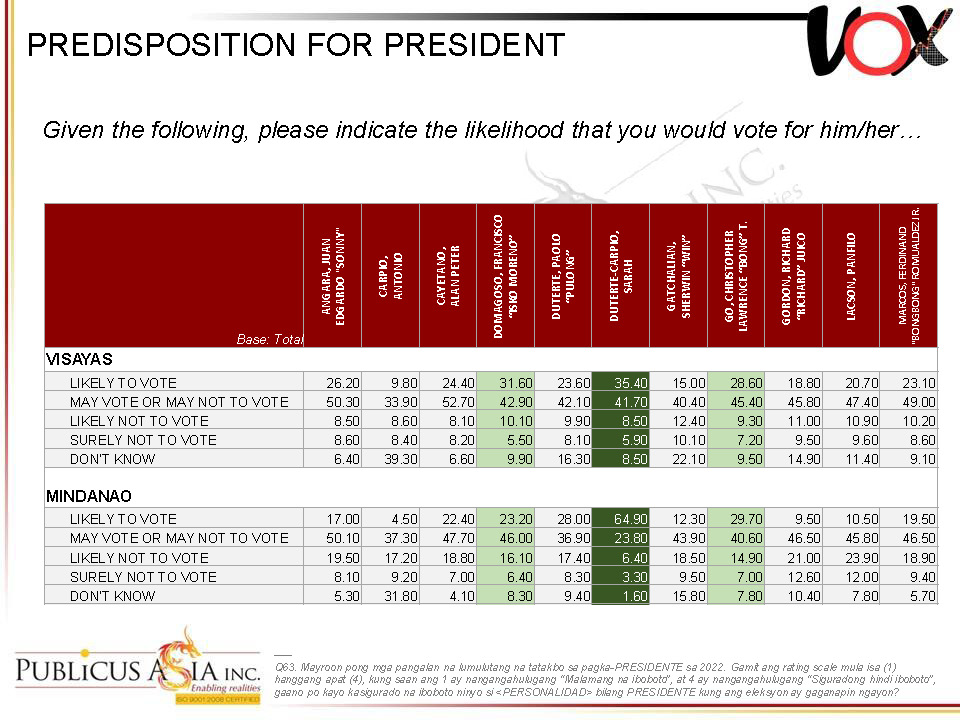 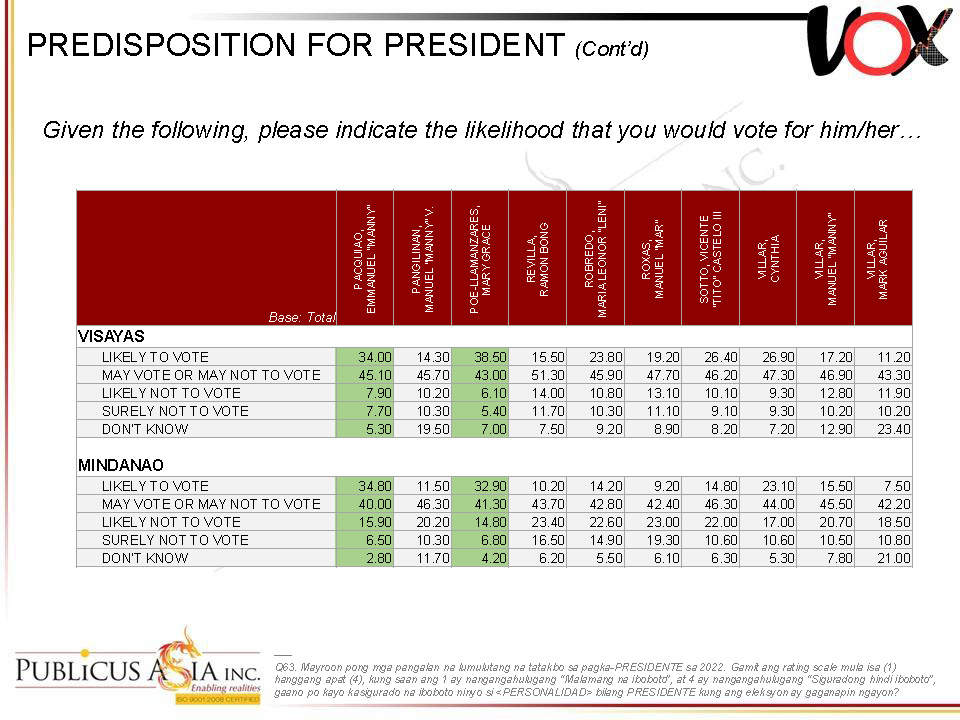 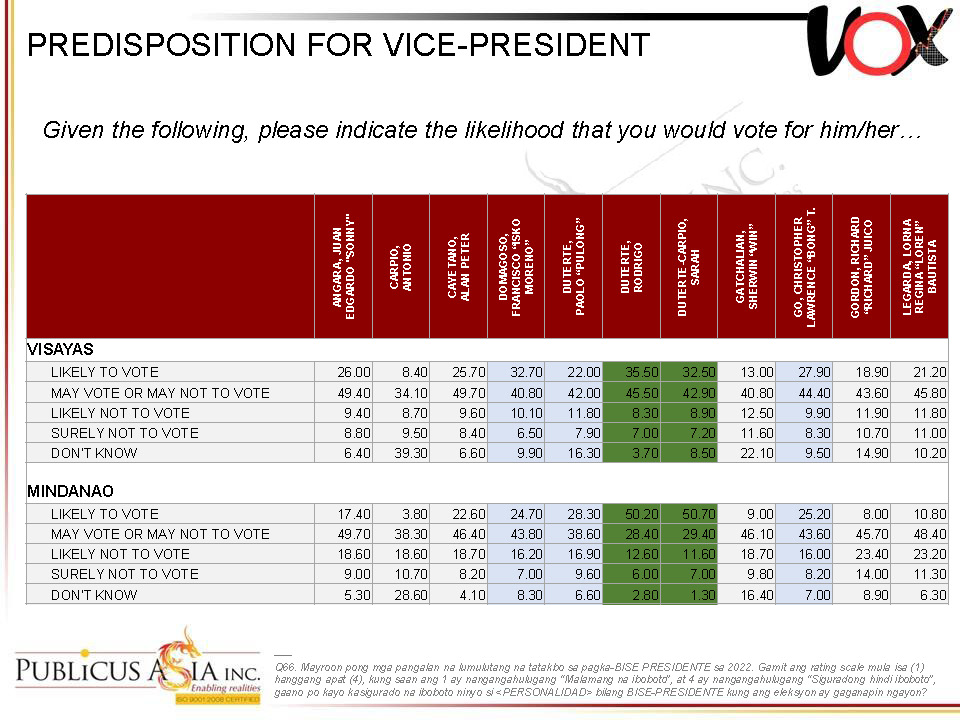 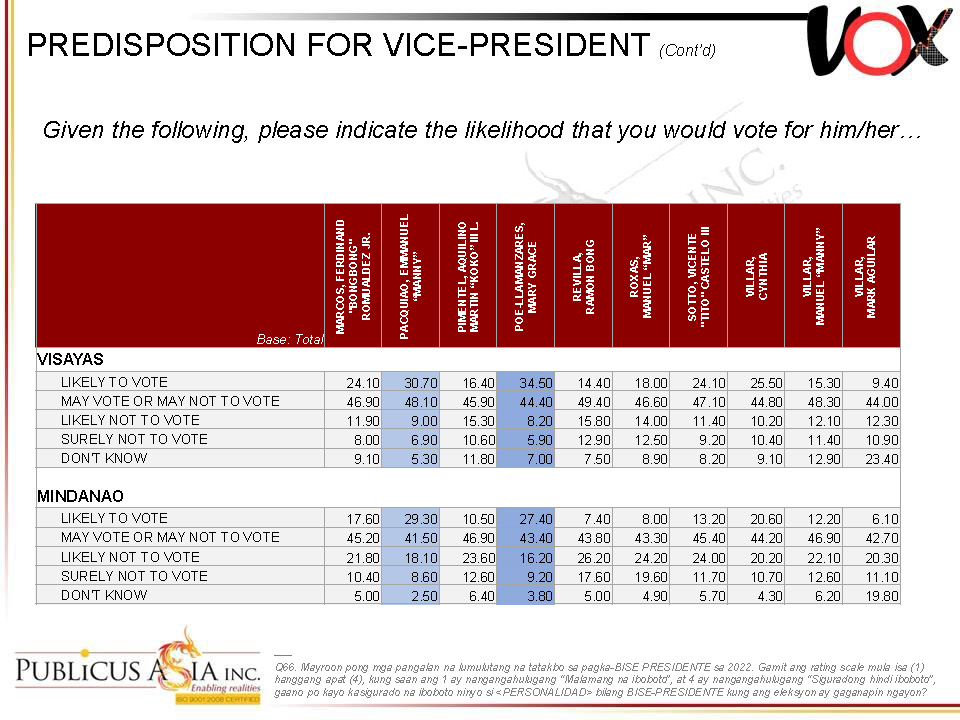 Sinsuat said this type of question is well-suited to gauge the general voting predisposition of voters at this early stage more than two years before the elections, when voters are opening to the possibility of voting for several different candidates.

“It appears that Senator Poe still has one of the strongest national brands of any politician today. We have to remember that if President Duterte didn’t seemingly come out of nowhere to take the presidential election by storm in 2016, Senator Poe might very well have been elected President instead. Her brand is still presidential in the eyes of many, even for those who live outside her traditional power base in Luzon. She seems to be in a good position to make another run for Malacañang in 2022, if that is what she desires,” Sinsuat said.

“It is incredible that a fresh-faced first-term mayor from the National Capital Region would put up such respectable presidential polling numbers in Visayas and Mindanao at this early stage in his career. He’s not even a national elective official, after all. It just goes to show that Yorme Fever isn’t a localized phenomenon – TV and social media have clearly spread the fever all the way from north to south. Mayor Isko’s kind of political star power is a rarity. I think a lot of eyes will be on Mayor Isko over the coming months and years to see whether he’ll stay in Manila or make the leap to national politics,” Sinsuat said.

While Sinsuat said that it was much too early to make any definitive presumptions about 2022, the reality is that many aspirants for the top two offices in the country have

already began subtle preparations for a potential presidential or vice presidential run. “The race for 2022 has already started. Look for things to start heating up a bit in 2020,” he said.

However, Sinsuat also stressed that anything could happen between now and the filing deadline in October 2021: “At this point in time before the 2010 and 2016 elections, former President Noynoy Aquino and President Duterte were not even on the radar yet. Who knows: maybe the next President will come out of nowhere, yet again, to win the privilege of leading the Filipino people for six years.”