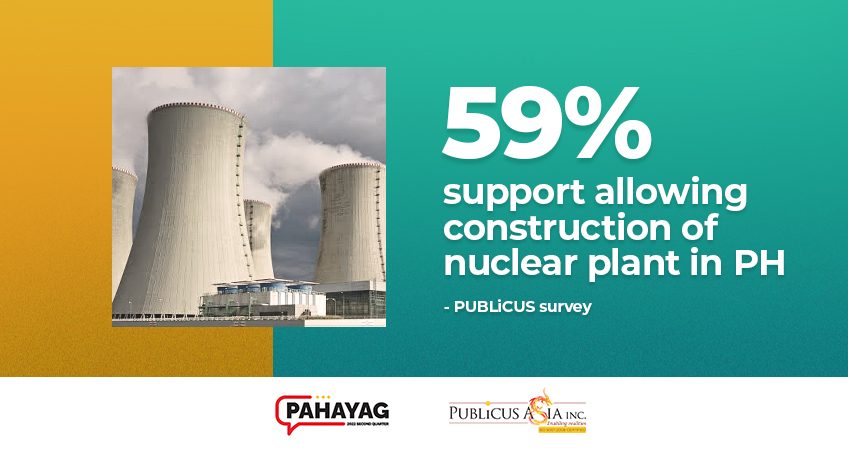 The latest PUBLiCUS survey results suggest that a majority of Filipinos support the construction of a nuclear power plant in the Philippines.

59 percent of respondents to the 2022 PAHAYAG Second Quarter Survey, conducted by PUBLiCUS Asia Inc. between June 16-22, 2022, said they ‘approve’ or ‘strongly approve’ of ‘allowing the construction of a nuclear power plant in the Philippines’.

“Our survey numbers suggest that proposals to add nuclear power to the Philippine energy mix may enjoy considerable support among the general public. At the same time, nuclear energy’s relatively high disapproval rate indicates that it could be a polarizing issue in future policy discussions,” said Atty. Aureli Sinsuat, Executive Director of PUBLiCUS.

Meanwhile, only 47 percent of respondents said they ‘approve’ or ‘strongly approve’ of the construction of additional coal power plants in the Philippines.

“It is interesting to note that our respondents appear to view nuclear power as a more appealing continuous energy source than coal. This could provide an opening for advocates to lobby more aggressively for the addition of nuclear power to the energy mix,” Sinsuat said.

Sinsuat also said it would be reasonable to expect “significant policy continuity” between the Duterte and Marcos Jr. administrations in the field of nuclear energy.

“This February, President Duterte issued Executive Order No. 164 adopting a national position for the introduction of nuclear power into the country’s energy mix. President Marcos Jr. lauded EO 164 during the campaign period and voiced clear intent to follow through with the national nuclear energy policy. Thus, we can expect significant policy continuity in favor of nuclear power between the Duterte and Marcos Jr. administrations,” he said.

The 1,500 registered Filipino voters respondents who participated in the 2022 PAHAYAG Second Quarter Survey were randomly sampled by PureSpectrum, a US-based panel marketplace with multinational presence, from their national panel of more than 200,000 Filipinos. The sample-wide margin of error is +/- 3%.

Note from PureSpectrum: “Samples provided by PureSpectrum are not affiliated with any bias or political party. All opinions voiced in the interpretation and analysis of the data are those of the writer and/or project sponsor.