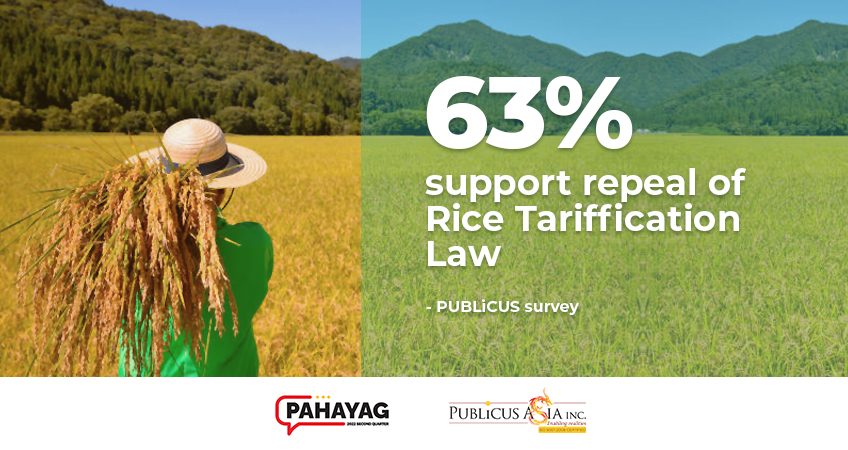 The results of the latest PUBLiCUS survey suggest that a majority of Filipinos support the repeal of the Rice Tariffication Law (Republic Act No. 11203), which removed quantitative restrictions on rice imports in favor of a tariff system when it was signed into law by former president Rodrigo Duterte in 2019.

Atty. Aureli Sinsuat, Executive Director of PUBLiCUS, noted that President Ferdinand “Bongbong” Marcos Jr. has yet to take a firm stance on the proposed repeal of the RTL since ascending to the presidency.

“While President Marcos Jr. has ordered the Department of Agriculture to conduct a reassessment of the Rice Tariffication Law, with particular emphasis on the PhP 10 billion Rice Competitiveness Enhancement Fund or RCEF for farmers, he has not made any public statement clearly supporting repeal of the law since taking office,” Sinsuat said.

“However, it is likely that President BBM will face significant pressure from farmers’ groups and their allies to adopt a more protectionist stance on agriculture in the coming months,” Sinsuat added.

Impact of repeal on rice prices

Meanwhile, PUBLiCUS’ resident economist predicts that repealing the RTL and reintroducing restrictions on rice imports would result in higher rice prices on the consumer market.

“The RTL allows less expensive foreign rice to be sold in large supply on the Philippine market. According to President Duterte’s economic team, this has resulted in a seven-peso decrease in the per-kilo price of rice since 2018. However, repealing the RTL and reintroducing quantitative import restrictions would significantly reduce the supply of cheaper foreign rice on the market, and the overall available supply of rice in general. In essence, repealing the RTL in favor of a return to quantitative import restrictions would likely result in higher rice prices for consumers in the short term, or during the time when domestic supply is ramping up to compensate for the reduction in imports,” said Dr. David Barua Yap Jr., Chief Data Scientist of PUBLiCUS.

In this context, Yap said it would be prudent for the Department of Agriculture to take into account the potential inflationary consequences of repeal when conducting its reassessment of the law.

“In a recent report, the Philippine Statistics Authority noted that the relatively high 6.1% inflation rate recorded in June 2022 was driven by rising food prices. Repealing the RTL would exert additional inflationary pressure on rice, the primary food staple of Filipino families. This is something the Department of Agriculture should consider during its reassessment of the law,” Yap said.

The 1,500 registered Filipino voters who participated in the PAHAYAG 2022 Second Quarter Survey were randomly sampled by PureSpectrum, a US-based panel marketplace with multinational presence, from its national panel of more than 200,000 Filipinos. The sample-wide margin of error is +/- 3%.