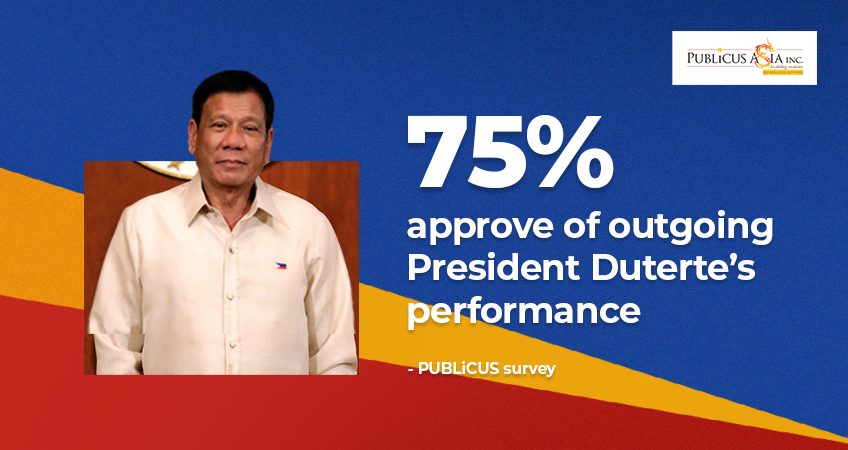 President Rodrigo Duterte is set to leave office as the most popular president of the post-EDSA I era according to the latest PUBLiCUS survey.

“Our numbers indicate that President Rodrigo Duterte will leave office as the most popular president of the post-EDSA I era. No other president who served under the 1987 Constitution has ended his or her term with majority approval and trust ratings, much less a supermajority of public support,” said Atty. Aureli Sinsuat, Executive Director of PUBLiCUS.

“The data suggest that public sentiment on the policy achievements of the Duterte administration is exceptionally positive, especially in comparison to previous administrations,” Sinsuat said.

“Based on our numbers, we can expect President Duterte to retain an unprecedented amount of political capital for a former president when he leaves Malacañang on June 30. When private citizen Duterte speaks up on the issues, many will listen. When he endorses a candidate, many will vote for them,” Sinsuat added.

The 1,500 registered Filipino voter respondents who participated in the survey were randomly sampled by PureSpectrum, a US-based panel marketplace with multinational presence, from their national panel of more than 200,000 Filipinos. The sample-wide margin of error is +/- 3%.