According to the results of PAHAYAG VisMin 2019, an independent non-commissioned survey conducted by consultancy firm PUBLiCUS Asia, Inc. (PAI) among 2,000 registered voters in Visayas and Mindanao from November 15-19, 2019, the United States is the foreign ally most favored by Filipinos. 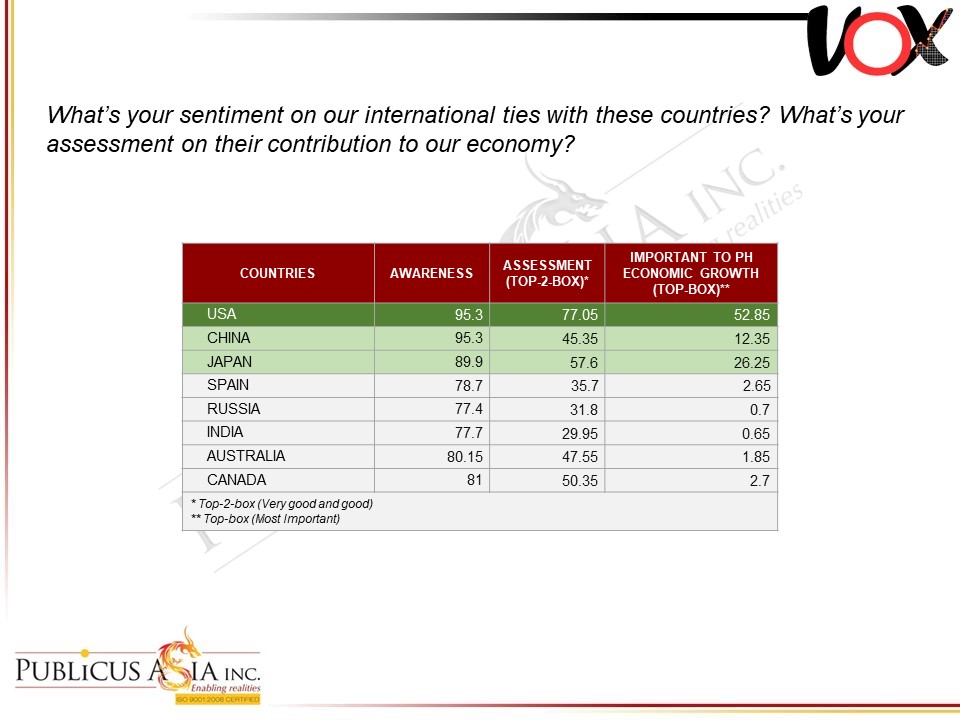 “These results show that the United States is still viewed in a positive light by most Filipinos despite lukewarm relations between the Americans and President Duterte over the past three years. However, this survey was conducted before the American government moved to impose sanctions on the President and some of his top allies. Public perception of the U.S. in the Philippines could trend in a negative direction as the relationship between the Duterte administration and the U.S. deteriorates even further,” said Mr. Aureli Sinsuat, PAI Executive Director and spokesperson.

Last month, U.S. lawmakers included a rider provision in federal budget legislation mandating the U.S. Secretary of State to prohibit entry into the country of “foreign government officials about whom the Secretary has credible information have been involved in the wrongful imprisonment of…Senator Leila de Lima who was arrested in the Philippines in 2017,” pursuant to the provisions of the U.S. Global Magnitsky Human Rights Accountability Act.

De Lima’s lawyers have also urged the U.S. government to impose additional sanctions authorized by the Magnitsky Act, such as the freezing of U.S.-based assets of officials deemed responsible for De Lima’s detention.

“I wouldn’t be surprised if the U.S. sanctions are perceived by many Filipinos as a personal attack against Duterte – an extremely popular president whose approval ratings are still in the high 80s midway through his term. Considering the fervent nature of President Duterte’s supporters, this threatens to erode the abundant goodwill the United States has enjoyed among ordinary Filipino citizens for many decades,” Sinsuat said.

However, Sinsuat pointed out that the extent of the sanctions’ impact on Philippine-American relations would largely depend on how the U.S. State Department would interpret and enforce the controversial budget provision.

The U.S. Department of State has yet to draw up its list of Philippine officials who are prohibited from entering the country based on the law. However, in October 2019 De Lima’s camp released a list of several Philippine officials whom she suspects to be behind her continuing imprisonment – at the top of which was President Duterte himself.

“Ultimately, the travel ban provision gives the Secretary of State some discretion in its implementation. It remains to be seen what will be deemed ‘credible information’ to deny entry to top government officials from America’s closest ally in Southeast Asia,” Sinsuat said.

“Will Senator De Lima’s list be deemed ‘credible information’ without any further corroborating evidence directly implicating the President and his associates? Would any additional information provided by Senator De Lima’s camp be given more weight than the decision of the Supreme Court of the Philippines upholding the validity of the senator’s arrest and continuing detention pending trial? The answers to these questions will determine the impact of the travel ban on Philippine-American relations,” he added.