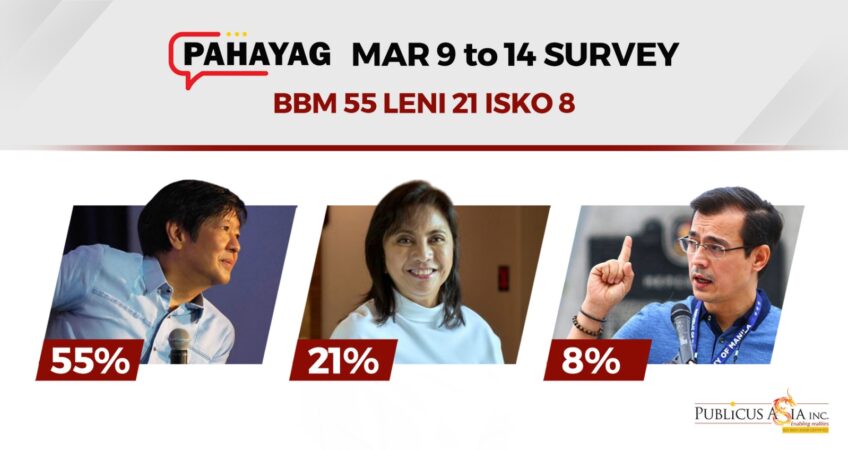 “The biggest point of interest in our latest survey is that the rankings for the presidential race remained virtually unchanged since last year. While it is true that former senator Marcos increased his preference share from around 52% to a little over 55% in our latest survey, these numbers remain generally in line with his longer-term averages. The same can be said for Robredo and Domagoso,” said Dr. David Barua Yap Jr., PUBLiCUS Chief Data Scientist and head of polling operations, on the March 17 episode of the PAHAYAG Election Report.

Marcos, Robredo, and Domagoso have consistently polled as the top three choices for president among respondents to recent PAHAYAG surveys.

“I would go so far as to say that using Google Trends searches and social media engagements as barometers of voter preference is lazy thinking,” Yap said.

Yap explained that engagement data does not provide the kind of one-is-to-one comparison between a registered voter and his or her electoral preferences that electoral surveys provide.

“You’re also introducing a lot of noise into the equation, thereby making it very difficult to get the sense of actual preference for a candidate or support for a campaign,” Yap said.

“I think it’s instructive to point out that Google Trends in itself points out that the statistics they post, or the statistics they give out to the public, are not to be confused with polling data. If you look at their FAQ, they explicitly state that this is not to be treated as any indication of how a particular campaign or election is going,” Yap added.

Parameters based on respondent age, gender, and location were also utilized in the sample formulation in order for the resulting sample to conform more closely to the features of the voting population, as defined by statistics from the Commission on Elections. The sample margin of error is 3%.

Read the Executive Summary of the March 9-14 survey here: https://www.publicusasia.com/es-pahayag-national-tracker-2/