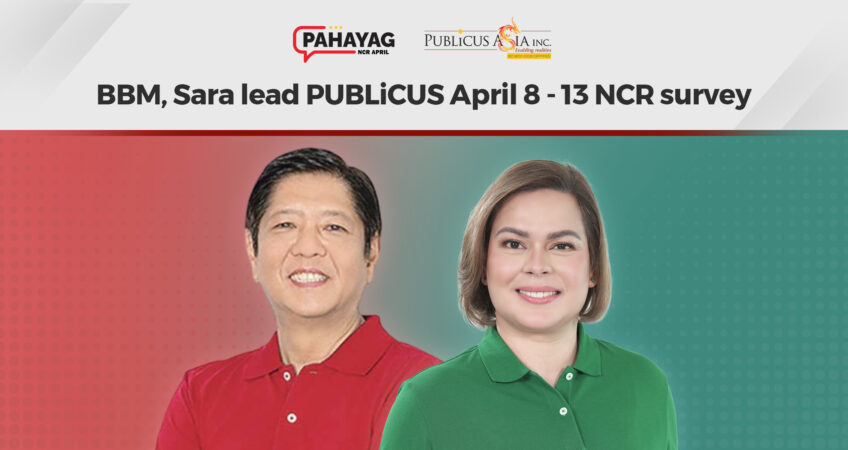 51.6% of the 1,625 Metro Manila residents who participated in April 8-13, 2022 survey chose Marcos as their bet for president. 24.3% of respondents said they would vote for Vice President Ma. Leonor “Leni” Robredo, while 9.8% chose Manila Mayor Francisco “Isko Moreno” Domagoso.

Vote firmness was also markedly high in the presidential and vice presidential races, with most supporters of leading candidates reporting they would definitely or likely not change their respective votes.

Duterte-Carpio notched the highest firm voter share in the vice presidential race, with 90% of her supporters saying they would definitely or likely not change their vote. Pangilinan, Sotto, and Ong notched firm voter shares of 84%, 77%, and 69%, respectively.

“The NCR vote firmness numbers appear to validate the general trend illustrated by our national data, which suggests that a large majority of registered voters are already dead-set on whom to vote for President and Vice President on May 9,” said Mr. Aureli Sinsuat, Executive Director of PUBLiCUS.

PAHAYAG NCR Tracker Survey: April is an independent and non-commissioned survey conducted by PUBLiCUS between April 8-13, 2022. The 1,625 registered Filipino voters comprising the purposive survey panel, all residents of Metro Manila, were randomly selected from the panel marketplace maintained by American firm PureSpectrum.

Parameters based on respondent age, gender, and location were also utilized in the sample formulation in order for the resulting sample to conform more closely to the features of the voting population, as defined by statistics from the Commission on Elections.

Note from PureSpectrum: “PureSpectrum is a US based panel marketplace with a multinational presence. Samples provided by PureSpectrum are not affiliated with any bias or political party. All opinions voiced in the interpretation and analyses of the data are those of the writer and/or project sponsor.”