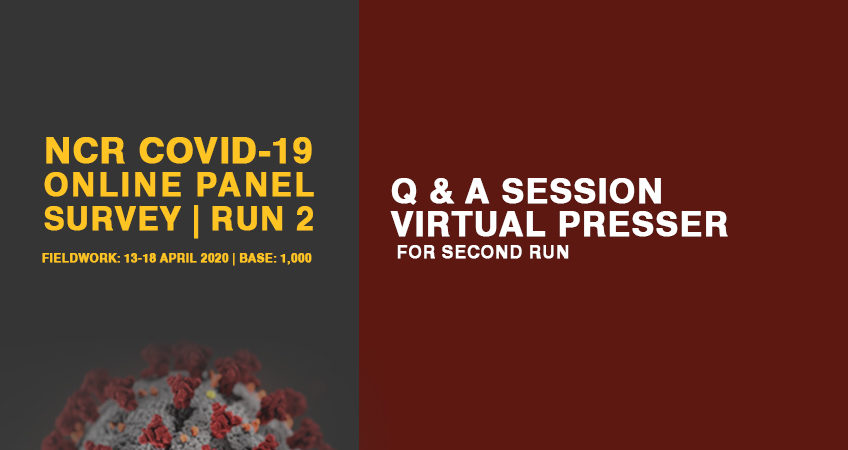 Question: The questions showed data on the forms of assistance already received from the Local Government.  How can this be utilized as a base point for more pro-active measures?

Answer: Well, if we look at the new classification, case classification system of DOH, it’s actually targeted, it’s to implement targeting testing not mass testing. When we move to the suspect probable confirmed cases classification system, essentially, we prioritizes the testing of symptomatic patient and considering our existing laboratory capacities, this is a realistic option for the DOH to take. This does not mean, however, that the DOH should stop in its push to accredit more COVID Testing Labs, we could acknowledge certainly that the testing capacity has, of the Philippines as a whole, increased significantly from the past couple weeks, the Department of Health has prioritized creating new labs. I saw on the Department of Health website, as of yesterday, we now have 17 Labs, and significantly, 12 of these are in Metro Manila which is the epicenter of the COVID outbreak here. Eventually, we will have to do some sort of mass testing for asymptomatic people, it’s a way for us to really flatten the curved and more importantly mass testing is the critical component of science based decision tool which will allow as to identify low risk areas that the quarantine and other restrictive lockdown measures can be lifted. So, I think, the approval of the Department of Health would certainly be affected by how they respond to what is the clear clamor in the survey for mass testing, at least here in Metro Manila.

Question: Most of the respondents said that at least one member of their household has lost employment due to the ECQ. However, the data also showed that majority of the respondents also want the ECQ to be extended so how it could work around for this?

Answer: Well if you are asking me to interpret what that means, the data indicates that the health and safety aspect of the Enhanced Community Quarantine are more important to the respondents than the loss of employment. If we look at the data we remember that the incidents of job lost was higher, the lower based for the lower income groups, and this is duly explainable, being means lower income groups are often employed in sectors or in specific jobs that we cannot be adopted to work from home arrangements. For example, retail, or maybe there are in informal sector, UV drivers, taxi drivers, these are jobs that simply  cannot be done from home, they require someone to be physically present, construction as well. So, to keep these families afloat or if the ECQ is extended it would really be up to the National Government or the Local Government Units to take actions. When it comes to the National Government, we really have to ensure the efficient, speedy, and transparent implementation of the Social Amelioration Program. As we see here in our survey, respondents were not exactly pleased of how the DSWD has been implementing the program so far. And this outcry has already been heard from some LGU officials, so the National Government will need to improve this as well.  Whereas, Local Government Units need to continue ensuring that their constituents have food, water, and other basic necessities to tie them over while the ECQ continues and while we try to flatten the curve.

Question: The approval of the response of the President has increase. Do you think that this will be sustained in the next round of the survey? What are the things that the President is doing to get such increase in approval?

Answer: If we remember that the PhilSys law, it was signed into law by President Duterte on August 8, 2018. It is now April 2020, and the PhilSys, the National ID, has still not materialized. So, this is terribly a shortcoming of the government and of the Philippine Statistics Authority in particular which is the lead implementing agency of the PhilSys Act. That being said, it would be difficult to roll-out something as complicated and something that requires so much manpower as the National ID System immediately at this time. There is one alternative that we could do. The National ID System essentially provides, it’s like a one-stop-shop for all of the data of the citizens, which is why it is very powerful in financial aid or aid operations because it’s easy for the government to identify who is the eligible for what type of aid. Perhaps something that the government could do in the short run is to really synchronize all of the databases of the line agencies, and have a lot more information sharing among the agencies. Like for example, DSWD, DILG, and all the other agencies with wide databases of citizens to really pull their database resources together and work as one to really identify those people who are in need of aid.

Question: Next question is, the data showed the level of approval and disapproval for the IATF. With the IATF being an inter-agency task force, do you think that the public see it as a different entity altogether? Or is the perception of the IATF heavily dependent on the individual achievements and/or failures of agencies that belong to it?

Answer: The IATF, you can see here when we compare to the approval of the President and the National Government, it’s different, it’s a little lower. So, this data indicate that the IATF-EID is really seen as a different body, a different institution within the national government. That is how it’s been communicating itself also since the start of this crisis. The IATF-EID is like the Center for Disease Control, even though we’re not familiar with the American Center for Disease Control, they were the ones who are really on the frontlines of pandemic. It’s our task force specifically on COVID-19. The IATF-EID is really more on the actual public health side of the COVID-19. So, they are the ones you know, fighting the disease itself, whereas other agencies like DSWD are the ones who are providing the auxiliary services such as, you know, providing the social aid. So, IATF-EID based on the data definitely is seen as a separate entity in the eye of the public.

Question: How will the inclusion of the middle-class families change the way things have been running in relation to the distribution of the SAP? Will this affect the poor sector which was the initial focus of the program?

Answer: The government has allocated billions of pesos for these programs and based on what we’ve been hearing from the national government, the assistance for middle class families is separate altogether from the Social Amelioration Program. As long as we have the funds available and this will be a tricky of financial situation for the DOF admittedly considering that the tax collection deadlines has been put off. But, it’s not really a funding issue, it’s more of an identifying issue. What I can say is, middle class families will be much easier to identify than the poor or lower income families under the Social Amelioration Program. Local families have government IDs, they have houses and phone numbers where they can be contacted, and they have these official documents that make it easy for them to register in the system to receive the financial assistance. Whereas, as we know many of the poor and the near poor might not have, you know, these records such as the government IDs or proof of residence, things like that. However, we should not stead the providing assistance to the middle families as taking away from the poor or the near poor, because the government, it sounds as if the government would be making sure that the poor and the near poor are well provided for. It’s not just taking a larger piece in the pie, but its making the pie bigger which is precisely what’s needed because as we saw in our data these are all provided by the ECQ. Middle class families are also losing jobs, members of the middle-class households are losing their jobs, so,it’s necessary for us to provide them with financial assistance as well.

Answer: That is a good observation. At first glance it would seem contradictory for the confidence in the National Government ability to the fall while its approval would rise. I would like to point out how that question specifically is worded. It is, the respondents are asked, what is the likelihood that the National Government would be able to contain or prevent the spread of COVID-19? I would say that the lowered confidence is a product of the increasing number of cases in the country. So, respondents would see it as a matter of that. In terms of containing the spread, the government has not been able to prevent the spread as much as it could have because the number of cases have been rising. Although we have to note also that doubling time of cases has decreased significantly during the start of ECQ. Again, my theory based on the data is that, the approval of the President and the National Government is closely linked to the overall approval of the Enhanced Community Quarantine. When the approval of the President and the National Government rises, so does the approval of the ECQ. And this is because the ECQ is the most visible and the most widely felt anti-COVID-19 measure of the national government.

Question: In case the ECQ would be extended until the end of May, would you have projections on how much is needed for the SAPs, the poor families, and the middle class? Is the President’s budget enough?

Answer: Well, I do not have the figures on how much it would cost to include middle-class families in an expanded Social Amelioration Program until the end of May. That is a good question and we should ask the government for that. However, I can say that the President would have immediate funds available. If we remember under the Bayanihan to Heal as One Act, which was passed by Congress in its special session to deal specifically with COVID-19, there are many provisions there allowing the president to move around, transfer parts of the budget, create savings and essentially utilize the entire, in theory, utilize most of, if not the entire 4 trillion pesos 2020 budget for fighting COVID-19. So, certainly the funds are there. It’s just a matter of identifying who needs these funds and identifying and counting exactly how much we will have to spend on these aid measures for our countrymen.

Question: The previous survey only showed money and food. How did the inclusion of free testing kit changed the results? What does this imply? To have include the free testing kit as a question in the panel survey?

Question: From Rose Fuentes on Viber. There are complaints regarding the distribution of government aid. How is the government handling the issue? Especially because there is a seeming reliability on the claim and issues regarding that?

Answer: Well, I’m not a government spokesperson so I can’t speak on how the government is handling this issue. I would just like to reiterate that what I said earlier, that ideally, we would have the National ID in place now. But since we don’t, the various government frontlines agencies who have, which have the extensive databases of citizens really need to share information with each other, and bring it, and, so that they could work together to identify in a transparent manner these people, the recipients, or the beneficiaries of these aid. In terms of transparency, that would increase the transparency because they can cross validate theirs with one another and may take out any ghost beneficiaries that might exist or essentially, they would be just double validating each other’s work. And through this inter-agency synergy, we can improve the transparency and accountability on how these funds will be handed out by the government.