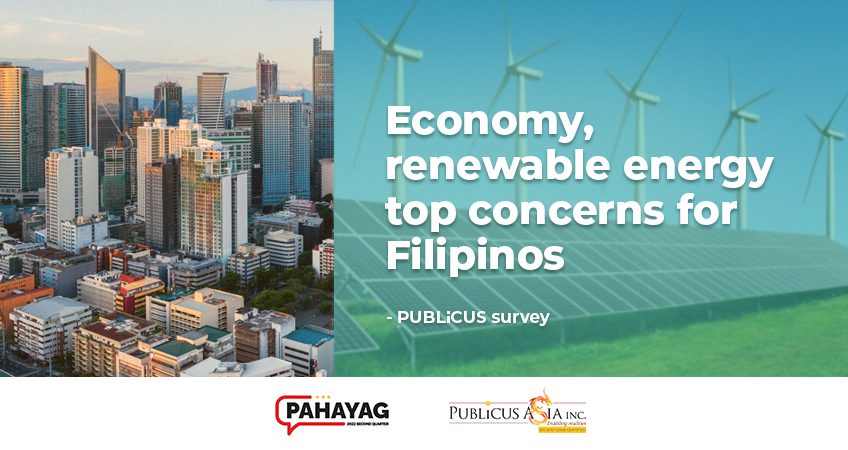 The results of the latest PUBLiCUS survey suggest that the most popular issues among Filipinos include the use of renewable energy, penalizing text spammers and scammers, and the continuation of government subsidies like Libreng Sakay and ayuda for marginalized sectors.

88 percent of respondents to the PAHAYAG Third Quarter Survey, conducted by PUBLiCUS Asia Inc. between September 16-20, 2022, said they ‘approve’ or ‘strongly approve’ of using renewable energy such as wind and solar farms.

Equally popular at 87 percent is the general sentiment of being fed up with the spread of text spammers/scammers to the point of wanting to penalize them. Next most approved are the continuation of government subsidies in the form of Libreng Sakay and ayuda for people below the poverty line (78%), and banning sexual offenders from teaching (76%).

Even with 71 percent approval of the full implementation of face-to-face classes, hybrid work remains an acceptable arrangement for 72 percent of respondents. SIM card registration to curb scammers and the NTF-ELCAC are supported by 7 out of 10 respondents.

Some of the least approved are the removal of GED subjects in college, taxing of passive income, importation of refined sugar, and increasing prices of commodities.

Marcos Jr. should focus on economy

Meanwhile, deemed as the most pressing among macro issues is uplifting the country’s economy with 23 percent of respondents saying that it must be the foremost focus of President Bongbong Marcos Jr.

One in 10 voters said that the most important issue the president should focus on is either corruption (12%), poverty (11%), prices/inflation (11%), or jobs (10%), which are closely interrelated with the economy.

18 percent of respondents said that not having the money to pay for basic needs remains the top key concern among households heading into the last quarter of 2022. Other issues including losing a job (12%), not getting enough pay (12%), difficulty in finding employment (11%), and getting sick with a serious disease apart from COVID-19 (10%) all boil down to the fear of not being able to afford one’s living necessities.

The 1,500 registered Filipino voters who participated in the PAHAYAG 2022 Third Quarter Survey were randomly sampled by PureSpectrum, a US-based panel marketplace with multinational presence, from its national panel of more than 200,000 Filipinos. The sample-wide margin of error is +/- 3%.

PAHAYAG is an independent and non-commissioned national purposive survey conducted by PUBLiCUS Asia Inc. PAHAYAG, a CSR program of PUBLiCUS, is released quarterly.