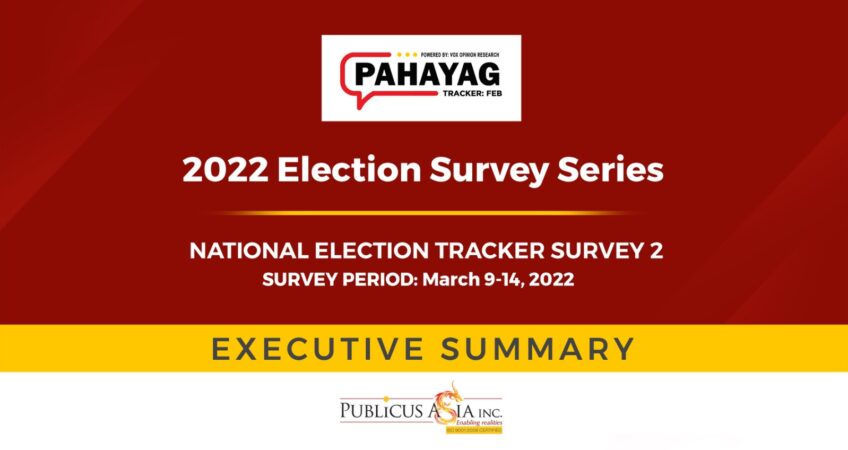 PAHAYAG NATIONAL TRACKER 2 (PT2) is an independent and non-commissioned poll conducted by PUBLiCUS Asia Inc. It is the second edition of the ongoing monthly survey series for the upcoming 2022 elections. The survey period of PT2 ran from March 9 to March 14, 2022.

PT2 is a nationwide purposive sampling survey comprised of 1,500 respondents that were randomly drawn from a market research panel by the Singapore office of PureSpectrum, a US based firm. The sampling was guided by statistics generated from official COMELEC data.

Vice President Maria Leonor Leni Robredo remains in second place with a preference share of 21.0%. This is consistent with her numbers in February and in December of last year. Manila Mayor Francisco Isko Moreno Domagoso is in third place with a preference share of 8.2%. As is the case with MLR, his latest polling figure is in line with his numbers in the previous two surveys of PUBLiCUS.

The numbers gleaned from PT2, PT1, and the Fourth Quarter PAHAYAG Survey suggest that presidential preferences have more or less remained steady over the past four months. No significant shifts in support were observed in the three surveys conducted by PUBLICUS deep into the 2022 election season. Upon comparing these results with the survey numbers of presidential candidates in 2016, it can be inferred that the 2022 presidential race is far less volatile than the 2016 presidential race.

Davao City Mayor Sara Inday Duterte-Carpio (SARA) maintains her lead over the rest of the field in PT2 with a preference share of 56.5%. Similar to her tandem partner BBM, she notched a 3% in March. Her latest figure is in line with her polling numbers in the previous two surveys of PUBLiCUS. It can be inferred that she is hovering around the 55% mark.

Senator Francis Kiko Pangilinan, Doctor Willie Ong, and Senate President Vicente Tito Sotto III are tied in second place with preference shares around the 11% mark. No significant shift in the structure of the overall ranking is discernible from the latest numbers.

The numbers suggest that there are still no changes in the overall distribution of vice presidential preferences. SARA is still firmly above the 50% mark. The three tied at second place are still struggling to break past the 15% mark.

The numbers suggest that the competition for the 12 senate seats is fierce – with several returning senators and senators seeking reelection competing with popular broadcast personalities, national executives, and a former vice president. It is difficult to see who will eventually prevail given the current numbers. There is a lot of jockeying across all ranks – especially outside the topmost ranks.

It is also worth noting that the fill-up rate is at around 8 – with only 40% of respondents selecting 12 names. Additionally, around 30% of respondents chose fewer than 6 names for their prospective senate slate.

THE PHILIPPINE ECONOMY and JOBS remain the two most popular issues for respondents. Both polled above the 55% mark. EDUCATION, CORRUPTION, and POVERTY remain in the second tier of concerns – with choice shares on or above 21% but far below the 55% watermark set by JOBS.

Given developments in Ukraine – and its implications on the global market for oil, concern over the economy and jobs (as well as prices / inflation) are expected to increase in the coming weeks. Issues affecting household finances are expected to come into sharp relief once (1) the brunt of the knock-on effects of the conflict in Ukraine register, (2) energy prices rise with the onset of the summer heat, and (3) aggregate demand surges with the easing of COVID restrictions.