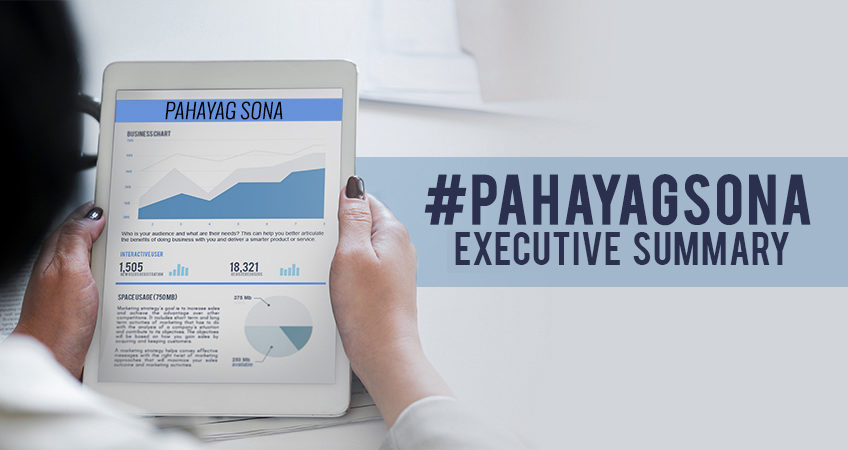 2020 PAHAYAG SONA is a 1,500-respondent independent and non-commissioned online panel survey conducted by PUBLiCUS Asia, Inc. The panel for the survey was provided by Lightspeed GMI Singapore Pte Ltd, Profiles Division of Kantar (“Kantar”). Kantar is a leading firm in the global data industry with a panel reach of 88 million respondents in 90 markets worldwide.

Invitations to answer the structured online survey questionnaire were distributed to the Philippine panel population on a random basis. Potential panel respondents were screened to possess the following characteristics: aged 18 years old and above, registered voter, and residing in the Philippines. The purposive sample was then drawn in proportion to the registered voting population as of the May 2019 elections.

The survey questions were designed to gauge the opinions and perceptions of respondents on the following key variables: Approval and Trust of Top 5 Leaders; Government Response to COVID-19; State of the Economy; Duterte Administration Policy Scorecard; 5th PRRD State of the National Address; Love, Care, Concern, and Decisiveness of Top 5 Leaders; National Political Issues; National Leaders and Institutions; Media Habits. Questions and answer options on the questionnaire were provided in English with corresponding Filipino translations. The data were collected between August 1-11, 2020.

The place of residence of respondents by major island region is proportional to the registered voting population as of the May 2019 elections. 56% reside within the three island regions of Luzon: 11.5% in the National Capital Region (NCR), 21.7% in North Central Luzon (NCL) and 22.8% in South Luzon (SL). The remaining 44% of respondents reside in Visayas (VIS, 20.7%) or Mindanao (MIN, 23.3%).

President Duterte is the only Top 5 Leader to garner majority Total Approval among respondents, with almost 2 out of every 3 respondents (64.6%) either approving or strongly approving of his performance over the last 12 months. President Duterte is also the most trusted among the Top 5 Leaders by a wide margin of 32 points. He is also the only Top 5 leader whose Total High Trust is higher than his Total Low Trust.

Out of the 13 agencies or institutions tested, only the Office of the President (61.2%) and the Inter-Agency Task Force on Emerging Infectious Diseases or IATF (50.2%) earned majority approval from respondents for their respective responses to the COVID-19 pandemic. The lowest Total Approval ratings were earned by the House of Representatives (35.3%), Department of Budget and Management (36%), Department of Transportation (36.6%), and Senate of the Philippines (37.7%).

While respondents overwhelmingly approved of the government’s strict enforcement of basic COVID-19 personal safety protocols such as the use of face masks (84%), the ban on large public gatherings (80.9%), and physical distancing (78.6%), they were less enthusiastic about the government’s implementation of more complex policies such as contact tracing (61.1%), distribution of financial aid through the Social Amelioration Program of the Department of Social Welfare and Development (58.8%), and the overall treatment of OFWs and locally stranded individuals affected by the pandemic (52.9%).

STATE OF THE ECONOMY

More than half or 51.6% of respondents reported at least one instance since the start of the lockdown when their families were unable to buy food. Six out of every ten respondents also reported that someone in their household lost his or her job because of the COVID-19 pandemic. Despite these hardships, however, respondents seem somewhat optimistic about the financial prospects of their families for the remaining months of year. 43.9% of respondents believe their financial prospects will improve either by a little or by a lot over the remaining months of 2020. Only about a quarter of respondents (26.2%) foresee their prospects worsening.

A majority of respondents signified they either Approve or Strongly Approve of the Duterte administration’s performance for all 19 policy thrusts tested. The highest Total Approval ratings were earned by the administration for its work in providing quality technical-vocational and tertiary education (75.27%), providing quality primary and secondary education (74.80%), responding to natural disasters (73.74%), and taking care of OFWs (70.87%). The lowest marks were earned for its efforts in promoting free speech (56.87% Total Approval), maintaining sovereignty (58.13%), managing inflation (61.67%), and improving international relations (61.86%).

Respondents were asked to indicate their reactions to 11 statements made by the President during the SONA. The most well-received statements were his declaration of the ‘no vaccine, no face-to-face classes’ policy, his stern directive for telco companies to improve their services, the promotion of anti-red tape measures and e-governance, and his mention of the Maximum Drug Retail Price (MDRP) Executive Order.

The least popular statements were his plea to Chinese President Xi Jinping for priority vaccine access, his comments on taking a non-confrontational stance against China in the West Philippine Sea dispute, his request to Congress for the swift passage of a death penalty law for drug offenses, and his remarks describing himself as “a casualty of the Lopezes during the 2016 election.”

President Duterte was chosen as the Top 5 Leader who shows Love, Concern, and Care the most. He was also chosen as the most Decisive leader. No less than 6 out of every 10 respondents chose him for each character trait. Vice President Maria Leonor “Leni” Robredo came in second place for all four traits, with a high score of 24.7% for Concern.

In general, respondents viewed selfless and morally upright leadership, which prioritizes and promotes the welfare of citizens through the provision of quality services, as most indicative of Love, Concern, and Care of leaders.

Health was by far the number one issue that respondents said the President should focus on, followed by the Philippine Economy and Jobs. Corruption and Education were also significant top-of-mind issues.

The Armed Forces of the Philippines (AFP) scored the highest approval and trust ratings among 15 government agencies and institutions tested. 68.07% of respondents said they Approve or Strongly Approve of the performance of the AFP over the past twelve months. Four other agencies secured majority approval from respondents: Department of Social Welfare and Development (51.8% Total Approval), Philippine National Police (51.73%), Department of Labor and Employment (51.4%), and the Supreme Court (50.13%). AFP was the only government entity tested to earn the trust of a majority of respondents. 50.73% of respondents said they put High or Very Trust in the military.

Senator Emmanuel “Manny” Pacquiao was the only incumbent senator to earn Total Approval and Total High Trust ratings of over 50%. Overall, more than 70% of respondents said they Approve or Strongly Approve of Pacquiao’s performance over the past 12 months. Senator Grace Poe came in a distant second place with 45.8% Total Approval. 62.73% of respondents answered that they put High or Very High Trust in Pacquiao — almost double the Total High Trust reading of second-placer Senator Bong Go at 32.87%.

Social media was the platform most frequently used by respondents to consume news. 79% of respondent said they read news on social media (Facebook, Twitter, etc.) at least four or more times per week, compared to 64.5% who watched TV news four or more times per week, 61.7% who watched news on streaming platforms such as Youtube, 37.1% who listened to radio news, and 20.5% who read print news.