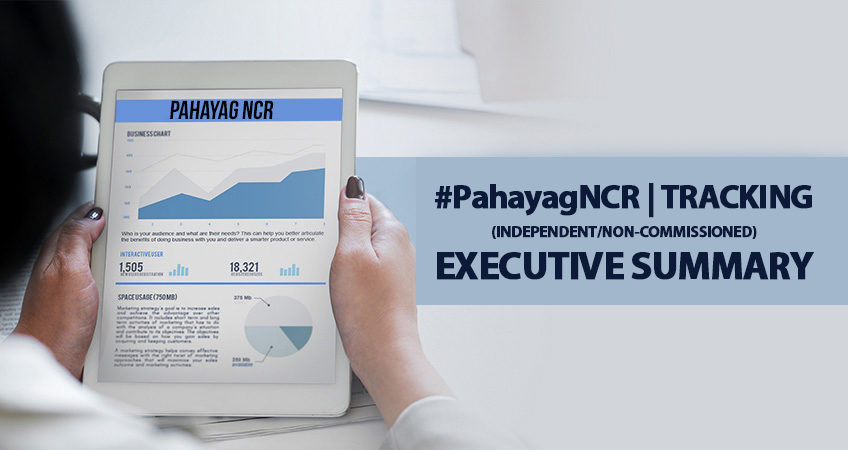 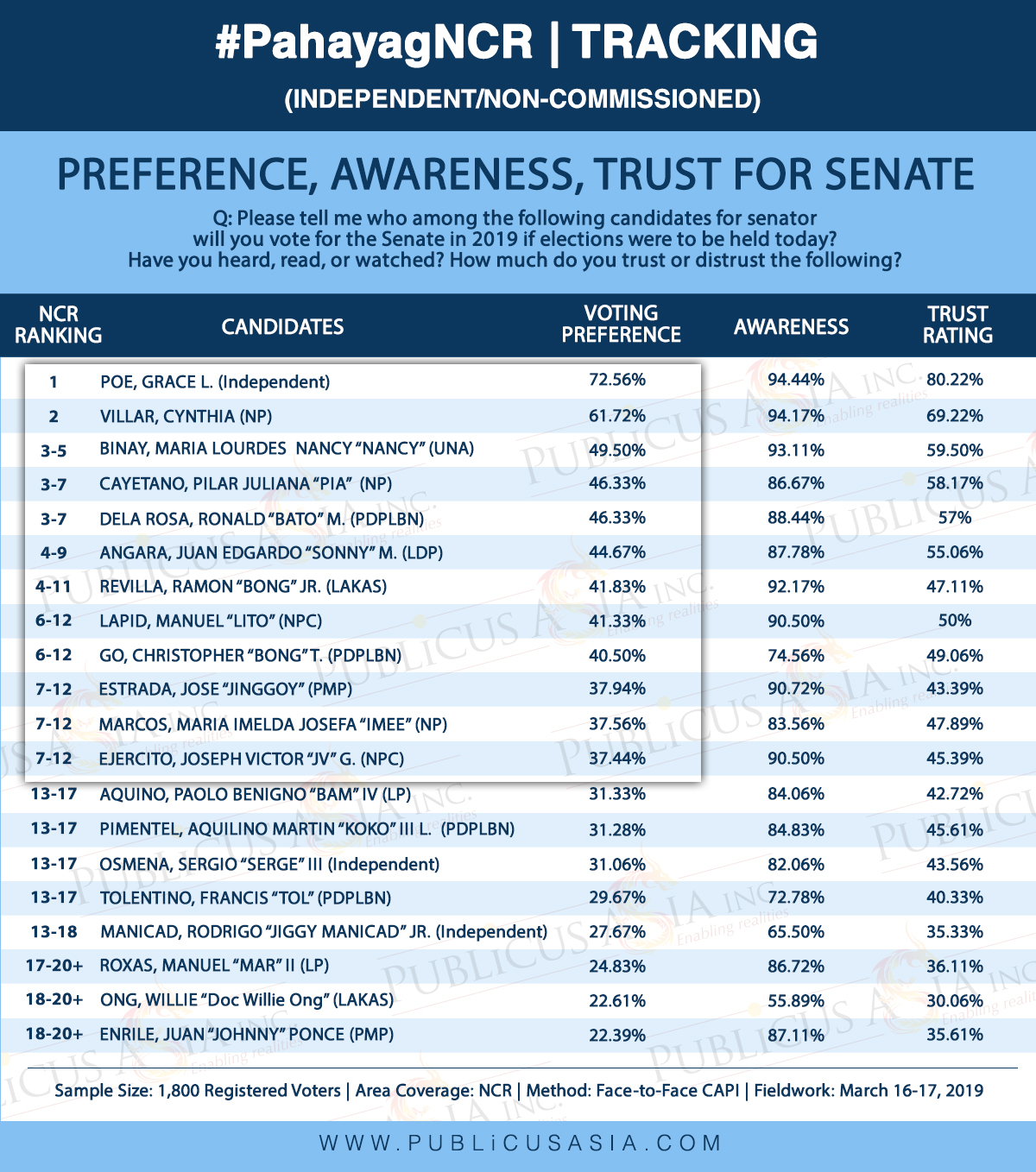 AWARENESS ON THE 2019 SENATORIAL CANDIDATES

TRUST RATINGS FOR THE SENATE CANDIDATES

Grace Poe tops the list of the most trusted candidate at 80.22% rating. This is followed by Cynthia Villar at second place, Nancy Binay at the 3-5 spot, Pia Cayetano and Bato Dela Rosa at the 3-7th spot, Sonny Angara in the 4-9th spot, Bong Revilla at the 4-11th spot, Lito Lapid and Bong Go at the 6-12th spot and Jinggoy Estrada, JV Ejercito and Imee Marcos in the 7th to 12th slot. Outside looking in are Bam Aquino, Koko Pimentel, Serge Osmena and Francis Tolentino at the 13-17th slots and Jiggy Manicad at the 13-18th mark. Mar Roxas is in the 17th-20th slot with Willie Ong and Juan Ponce Enrile filling the rest of the top 20, ranking in the 18th to 20th spots. No opposition-aligned candidate made it to the top 12 in the current rankings.

VOTING PREFERENCE OF THE PUBLIC THIS MIDTERM ELECTION

In the survey, most voters generally prefer Grace Poe as their candidate this coming election. She is followed by Cynthia Villar at the second place and Nancy Binay in the 3-5 slot. Both Pia Cayetano and Bato Dela Rosa are in the 3-7 slots and Sonny Angara solely in the 4-9th spot. In the fourth to eleventh spot is Bong Revilla. Lito Lapid and Bong Go are in the 6-12th spot. Rounding up the winners are Jinggoy Estrada, Imee Marcos and JV Ejercito, who all three are in the 7-12th spot. From 13-17 places are Bam Aquino, Koko Pimentel, Serge Osmena and Francis Tolentino. Mar Roxas is in 17-20 threshold while both Willie Ong and Juan Ponce Enrile at 18-20 spots. No candidate aligned with the opposition made it in the winners’ circle.

In Marikina, Marcy Teodoro enjoys a massive lead in the mayoral race. In Muntinlupa, Jimmy Fresnedi has the better vote firmness than his closest rival, Mark Marinas. In Navotas, Toby Tiangco remains the frontrunner against Dan Ang. In Paranaque, Edwin Olivarez leads against Jun Bernabe in the race. In Pasay, Emi Calixto has the upper advantage against Chet Cuneta.

In Pasig, Bobby Eusebio holds a massive lead over Victor Sotto. In Pateros, Ike Ponce has a sizable lead over his opponent Willie Buenaventura. In Quezon City, Joy Belmonte, has the lead against Bingbong Crisologo. In Taguig, Lino Cayetano holds a lead over Arnel Cerafica. In San Juan, Francis Zamora has a double digit lead over Janella Ejercito. In Valenzuela, Rex Gatchalian has an insurmountable lead against his rivals.

To inquire about the rates of the comprehensive report, contact PUBLiCUS Deputy Director, Mr. Jake Bergonia, at jarbergonia@publicusltd.com or via 0928 505 2010.