PAHAYAG VISMIN is an independent non-commissioned survey with a sample size of 2,000 registered voters across the Visayas and Mindanao regions. 1,000 survey respondents were chosen at random from the Visayas and Mindanao clusters, respectively, from the following regions: Western, Central, and Eastern Visayas, Zamboanga Peninsula, Northern Mindanao, Davao Region SOCCSKSARGEN, Caraga Region, and BARMM.

Respondents were asked questions to gauge their opinions and sentiments on the following key variables: Living Standards; The Country (State of the Nation); Love and Care of Leaders; Political Issues; Political Parties; Sources of News on Political and Current Events; Media Habits; Endearing Brands; Life in Visayas and Mindanao; and Predisposition for 2022 Elections.

Nine out of every ten PAHAYAG VisMin respondents reported they were satisfied with their personal lives, with 55.80% indicating they are HAPPY and 33.55% VERY HAPPY with their lives. Meanwhile, only 10.65% of respondents said they are SAD (9.40%) or VERY SAD (1.25%) with their lives. Respondents recorded the highest percentage of VERY HAPPY ratings in Caraga Region (43.2%), Eastern Visayas (41.42%), and President Rodrigo Duterte’s hometown, Davao Region (40.65%). 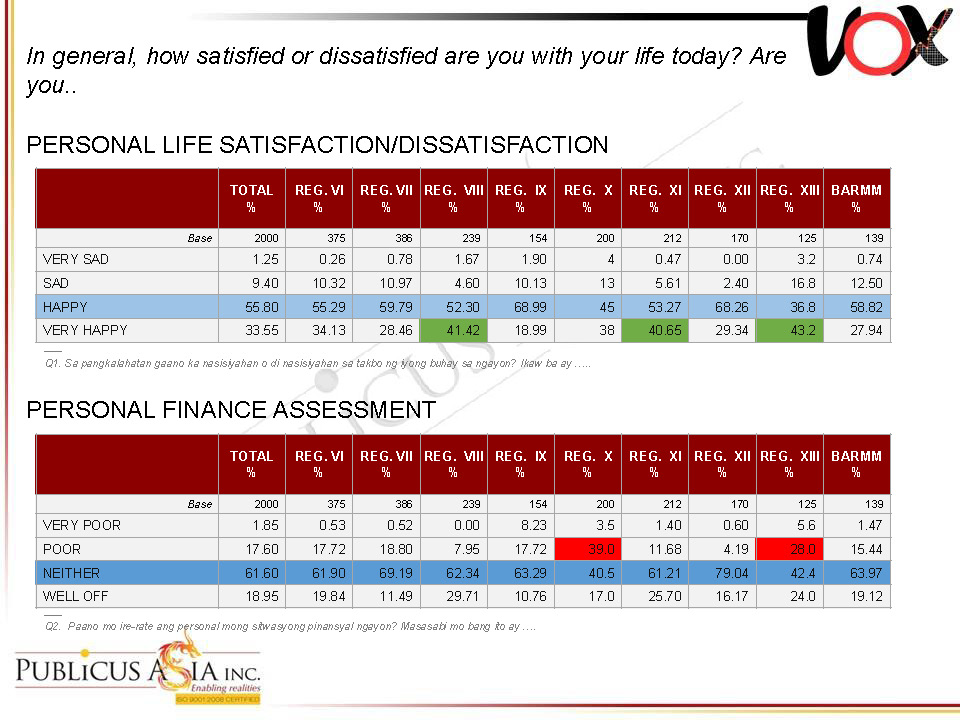 It is of note that the proportion of respondents that indicated they were POOR or VERY POOR (~20%) in several regions (Western Visayas, Central Visayas, Northern Mindanao) are remarkably higher than the official 2018 poverty statistics of the Philippine Statistics Authority.

Majority of the respondents rated their family lives as FAIR with the remainder more or less evenly split between GOOD and POOR. Notable deviations from this overall pattern are observed in Northern Mindanao and Caraga, wherein larger proportions indicated that their family lives are POOR (~40%). 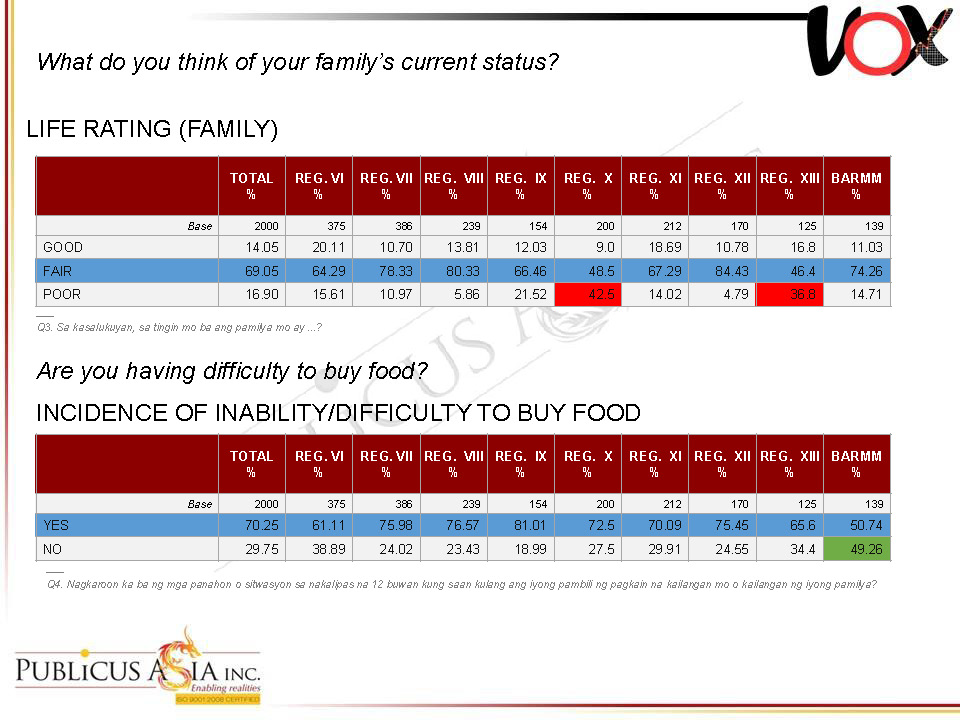 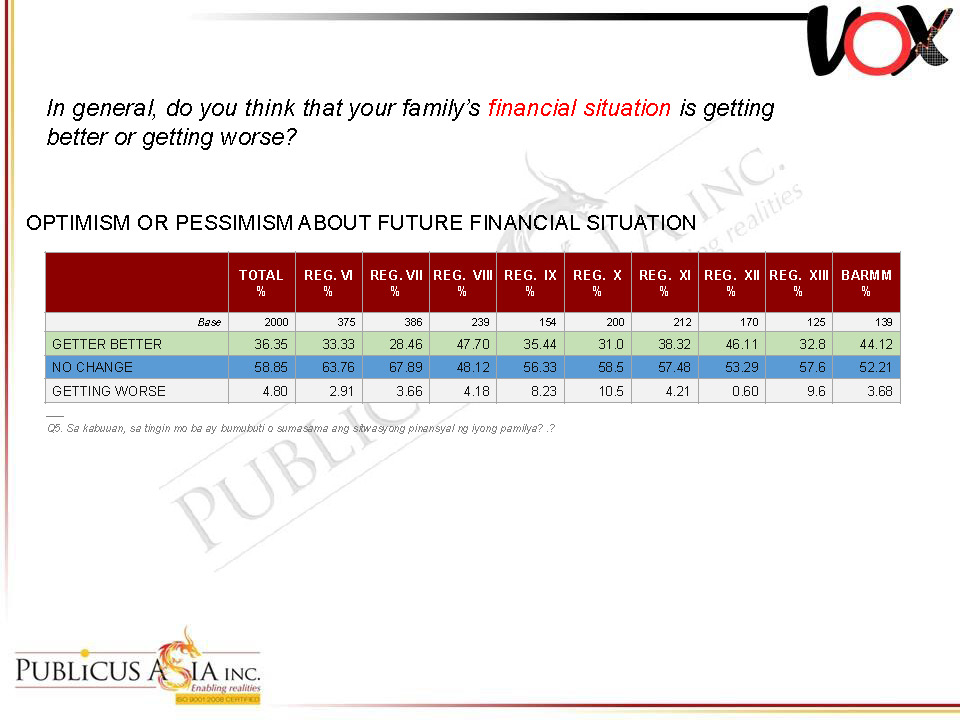 Majority of the respondents are HAPPY with the delivery of all basic services. In particular, they are happiest with education (75.20%), health (74.45%), and electricity (72.75%). Significantly, dissatisfaction with health and education services was low across all regions, the highest dissatisfaction rate being the 5.15% recorded in BARMM for both services. 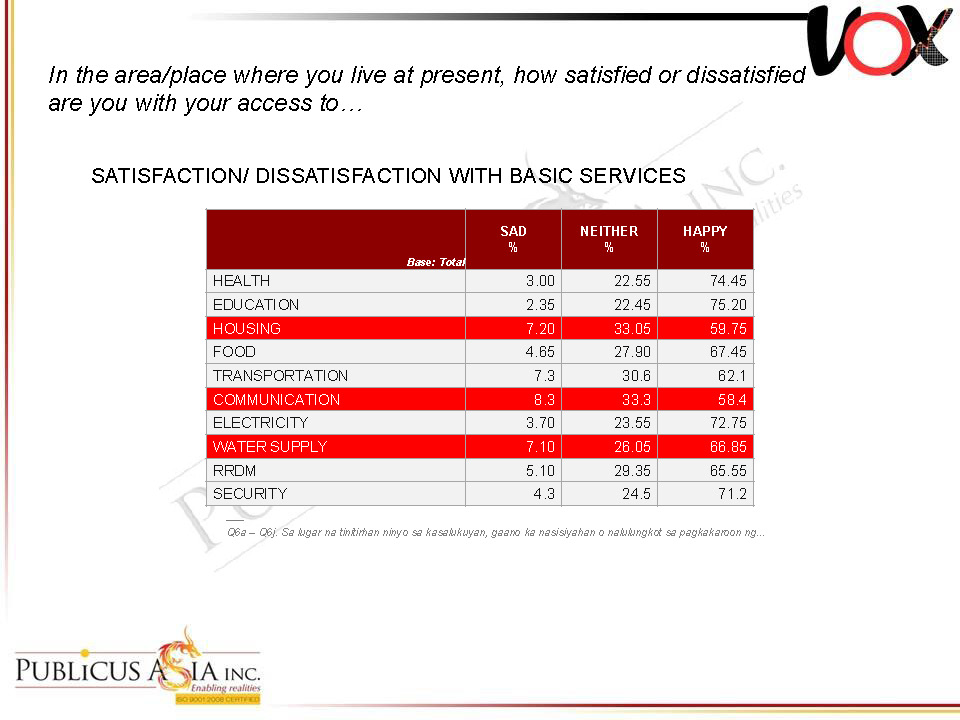 It should be noted that water supply, which notched the fourth-highest incidence of dissatisfaction across VisMin at 7.10%, also notched high levels of dissatisfaction in BARMM (13.97%), Zamboanga Peninsula (13.92%), Caraga (10.4%), and Central Visayas (9.66%).