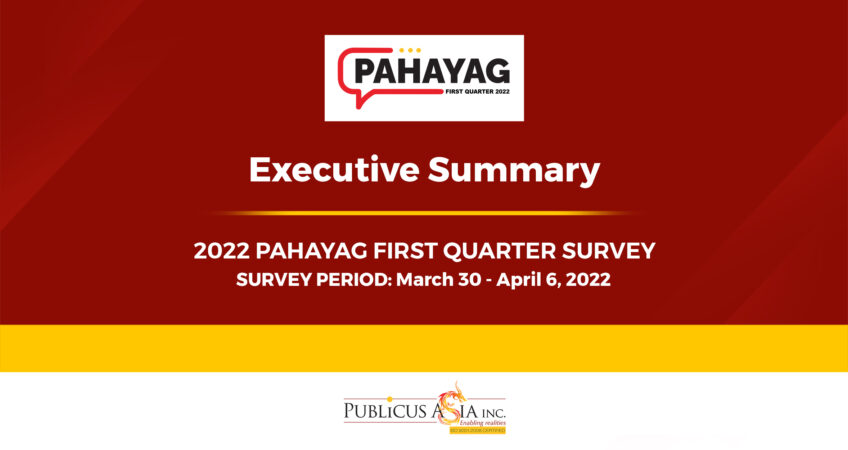 In line with our commitment to providing a wealth of timely actionable information to Filipino voters, political stakeholders, and the media, PUBLiCUS is proud to present the Full Public Results Report of our PAHAYAG 2022 First Quarter Survey (2022 PQ1).

PQ1 2022 is an independent, non-commissioned nationwide purposive sampling poll conducted by PUBLiCUS between March 30 and April 6, 2022. Aside from the Election Preferences module previously released on Friday, April 8, 2022, the Full Public Results Report includes data and analyses on the following modules:

The data suggest that PQ1 respondents are generally optimistic about the financial prospects of their respective households as well as the economic prospects of the Philippines as a whole. 72.9% of respondents said they expect their household financial prospects to improve either a little or a lot in the second quarter of 2022, while almost 70% said they expect the country’s economic prospects to improve over the same period.

The most contentious issues among respondents were the potential downgrading to COVID-19 Alert Level 0 in the National Capital Region, the signing of the law allowing foreign ownership of telecommunications companies, and the lifting of face mask requirements in public places. Significantly, the lifting of face mask requirements was the only issue tested on the March 30 to April 6 survey that generated higher Total Disapproval (49.2%) than Total Approval (29.1%) among respondents.

President Duterte once again managed to get majority scores in all but one trait: Religious. His most popular traits include Bravery, Love for the Philippines, Concern for Filipinos, Decisiveness, and Responsibility.

CNN and GMA-7 are again the most trusted news outlets with Total High Trust ratings above the 45% mark. It is of note, however, that they are still below the 50% mark in terms of Total High Trust. ABS-CBN and Rappler once again notched the highest Total Low Trust ratings.

The 1,500 respondents who participated in the survey were randomly drawn by the Singapore office of American firm PureSpectrum from its market research panel of over 200,000 Filipinos.