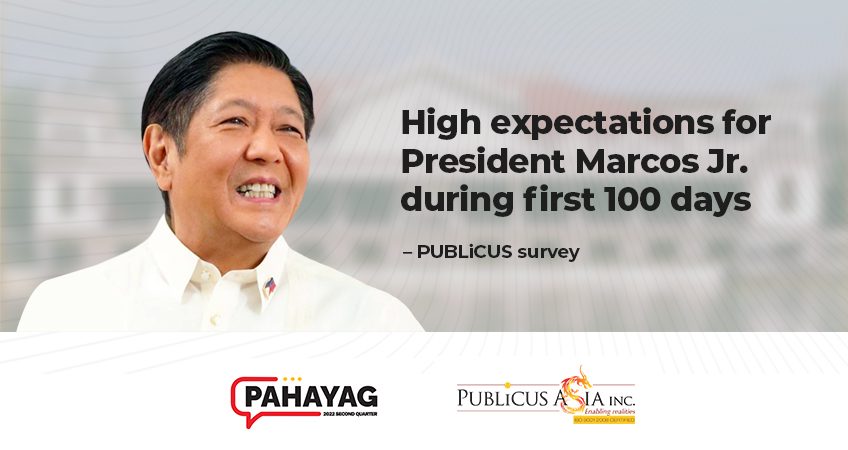 Incoming President Ferdinand “Bongbong” Marcos Jr. is facing high expectations to perform well during his first 100 days in office according to the latest PUBLiCUS survey.

Respondents to the 2022 PAHAYAG Second Quarter Survey (2022 PQ2), conducted between June 16 to 22, 2022 by PUBLiCUS Asia Inc., were asked to respond to the following query: “Using the rating scale from 1 to 5, where 1 is VERY POORLY, 3 is NEITHER POORLY NOR WELL, and 5 is VERY WELL, select the option that would best describe how you expect [Ferdinand “Bongbong” Marcos] to perform during the first 100 days of the incoming administration.”

“Our survey suggests that roughly two out of three Filipinos expect President Bongbong Marcos to perform well during the first 100 days of his presidency. President Marcos Jr. will have to hit the ground running from Day One to live up to these high expectations,” said Atty. Aureli Sinsuat, Executive Director of PUBLiCUS.

Respondents to 2022 PQ2 were also asked to select and rank the three most important issues that the next president should focus on.

“Economic development, job creation, and education reform are not issues that can be completely addressed over the course of 100 days. However, public perception on the Marcos Jr. administration could be expected to remain relatively positive if these top-of-mind issues are prioritized by the incoming president and his team during their first few months in office,” Sinsuat said.

64 percent of respondents said they support the continuation of the ‘BARMM transition’. Continuation of the National Task Force to End Local Communist Armed Conflict (NTF-ELCAC) earned an approval rating of 56 percent.

“Considering President Duterte’s enduring popularity, it is not surprising that a significant majority of respondents support the continuation of his flagship programs. While the level of policy continuity between the outgoing and incoming administrations remains to be seen, it is reasonable to believe that public opinion on the Marcos Jr. administration will be influenced, at least in part, by its ability to continue and improve upon at least some of the Duterte administration’s more popular flagship programs,” Sinsuat said.

The 1,500 registered Filipino voter respondents who participated in the 2022 PAHAYAG Second Quarter Survey were randomly sampled by PureSpectrum, a US-based panel marketplace with multinational presence, from their national panel of more than 200,000 Filipinos. The sample-wide margin of error is +/- 3%.

Data visualization of the issues modules may be viewed on the Executive Summary of the 2022 PAHAYAG Second Quarter Survey here: https://www.publicusasia.com/executive-summary-2022-pahayag-q2/