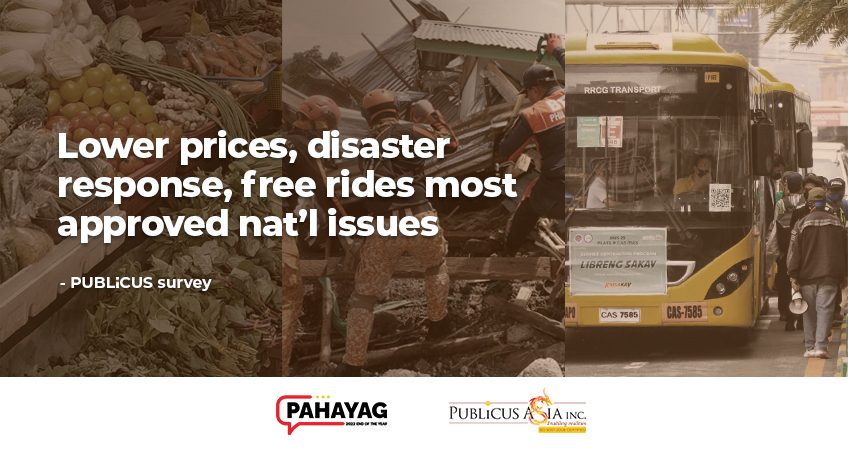 The results of the latest PUBLiCUS survey suggest that the top most approved national programs are mainly about the help extended by the government to Filipinos, which include goods at reduced prices, response to national disasters, free rides, VAT exemption, and ayuda for the poor.

84 percent of respondents to the PAHAYAG 2022 End of the Year Survey (P-EOY 2022), conducted by PUBLiCUS Asia Inc. from November 25-30, 2022, said they approve or strongly approve of the launching of “Kadiwa ng Pasko”, a national caravan where basic goods are sold at lower prices.

The government’s response to natural disasters such as typhoons and earthquakes and the implementation of hybrid work arrangement were also approved by 8 in 10 Filipinos.

Meanwhile, gaining huge support at 80 percent was the continuation of the Libreng Sakay Program in EDSA Bus Carousel and value-added tax (VAT) exemption on electricity and water.

program of the Marcos administration like the Farm-to-Market Roads (FMR), Samal Island-Davao City Bridge, Central Luzon Link Expressway, and subway was also rated as approved or strongly approved by 78 percent of respondents.

Likewise supported by a majority of Filipinos at 77 percent is the ayuda for the marginalized sector (people below the poverty line, farmers, fisherfolks, and students).

Other relevant national issues were approved by 7 (or fewer) in 10 respondents.

The 1,500 registered Filipino voters who participated in the PAHAYAG 2022 End of the Year Survey were randomly sampled by PureSpectrum, a US-based panel marketplace with multinational presence, from its national panel of more than 200,000 Filipinos. The sample-wide margin of error is +/- 3%.