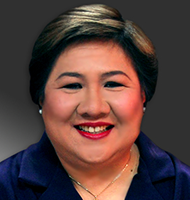 MARIA LOURDES NAVARRO TIQUIA is a noted lobbyist and political strategist in the Philippines and in Asia. She is a trained and experienced political management expert and a policy analyst, hence combining politics and policy in her 29 years of professional career.

She was a TV host to CNN-PH’s public affairs program, Agenda for more than three seasons and resigned in December 2015 due to her involvement in a presidential campaign. She continues to be a columnist for The Manila Times.

She has gained such training and experience moving from the public sector to non-government then to the academe and the private sector. She brought her 15 years of public sector experience into what she does best today – as Founder/CEO of PUBLiCUS Asia Inc.
Malou served in the Philippine Government for 15 years covering the Executive and Legislative branches. Her first government stint was in the Environmental Management Bureau in 1985. When the Philippine Congress was reconvened in 1987, she joined the technical staff of human rights lawyer, Sen. Rene Saguisag. She was later invited to join the Office of the President in 1990 under the Cory Aquino Administration to implement the Organic Act in Muslim Mindanao.

In 1992, she joined the House of Representatives of the Philippines as Chief of Staff to US Naval Academy graduate Rep. Roilo Golez. She worked for Rep. Golez until 1999, overseeing his re-election twice, in 1995 and 1998. In 1995, she was appointed Technical Advisor (Executive Director) of the League of Municipalities under a USAID program.

In 1991 she was awarded the U.S. Congressional Fellowship of The Asia Foundation. She worked in the 100th U.S. Congress under the Subcommittee on the Environment of the Science, Space and Technology Committee chaired by New York Democrat, James Scheuer. She handled policy work on Climate Change. She later joined the Office of Sen. John Seymour, a Republican from the State of California where she did research, program and policy review on the Resource Conservation and Recovery Act (RCRA) and its proposed amendments as well as on the designation of sole source aquifers on Native American reservations pursuant the Safe and Drinking Water Act and RCRA.

During her fellowship in the US Congress, she was likewise part of the Parliamentary Exchange Visit in the Canadian Parliament in 1992. In 1997, Malou was awarded with a MASHAV Scholarship and went to Israel to study the Knesset. She remains a keen student on parliaments or legislative bodies and political party building.

In between 1989 to 1998, Malou taught political science courses on a part time basis in various schools, namely: De La Salle University and University of the Philippines-Diliman. By 1999, she joined the Faculty of the National College of Public Administration of the University of the Philippines on a full-time basis. She handled both undergraduate and graduate classes on public policy, research methods, regulatory reform, and democracy audit. And in 2003, she also taught part-time at the Political Science Department of Ateneo de Manila. She taught lobbying, advocacy and campaigns.

Wanting to bring her experience to bear and pursuing what she really wanted to be, Malou went to graduate school once more in 2000. This time in the US, in a city she has been most familiar with, she completed her second graduate degree, this time in political management. Offers were made for her to stay in the US but she strongly believed then, as it is today, that the only way to help the country is to go back and do pioneering work in political management in the Philippines and Asia.

She has done advocacy trainings in Central and East Asia and political management work in Indonesia, Cambodia, Malaysia and Thailand. She is often invited to do capability building trainings on political communication, marketing and management.

She is likewise a council member of the Gerson Lehrman Group, the world’s largest network of expert consultants connecting referrals to new projects and leading decision makers around the world.

In 2003, Malou founded PUBLiCUS Asia, Inc. – the first and only registered lobbying and campaigns management firm in the country. Under her management, PUBLiCUS has set the standards in this nascent industry in the government relations and political campaigns management. PUBLiCUS has defined the industry standards by creating a niche and distinguishing itself from law offices, public relations firms, and issue advocates.