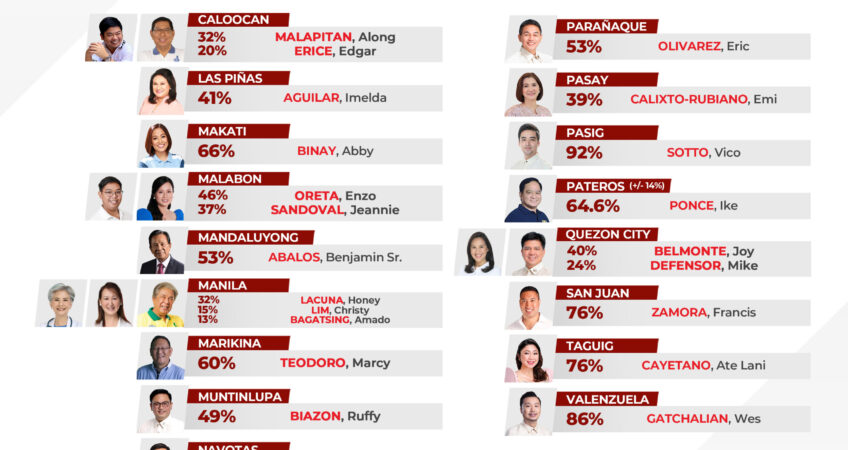 The country’s most populous city and its formal seat of government are among four hotly contested “battlegrounds” cities in Metro Manila where the mayoral elections appear to be particularly close, according to the findings of the March 16-21, 2022 PAHAYAG NCR Tracker Survey conducted by PUBLiCUS.

“Looking at both the February and March surveys, it is clear that the local races in NCR are becoming more competitive,” said Dr. David Barua Yap Jr., the Chief Data Scientist of PUBLiCUS.

The survey asked a total of 1,648 registered voter respondents – 100 residing in each Metro Manila city and 48 from the Municipality of Pateros – to provide insights on their preferences for mayor and vice mayor in their respective cities. The survey’s implied margin of error is 10% for city-wide results, and 14% for Pateros.

Taking into account the 10% margin of error, incumbent Manila Vice Mayor Honey Lacuna now finds herself in a three-way statistical tie for first place in the mayoral race. Lacuna earned 32% of the vote from Manila respondents to the March survey, followed by Christy Lim at 15% and Amado Bagatsing at 13%. Lacuna had been polling at a more comfortable 44% on the February 18-24, 2022 NCR Tracker Survey.

The data suggest that the mayoral race in Quezon City has also tightened, with Mayor Joy Belmonte polling at only 40% in March – a 17-point decrease from her 57% rating in February. Congressman Michael Defensor has moved into a statistical tie with Belmonte for first place after earning 24% of the vote on the March survey.

Manila and Quezon City are among four mayoral battleground cities identified by the survey data, where two or more candidates are statistically tied for first place.

The others are Caloocan, where Congressman Along Malapitan (32%) and Congressman Egay Erice (20%) are competing for the mayoral position, and Malabon – where Councilor Enzo Oreta and former Vice Mayor Jeannie Sandoval remain in a dead heat with 46% and 37% of the vote, respectively.

According to Yap, the noticeably tighter March survey numbers in many NCR cities are likely just the beginning.

“I think that in the more competitive cities, we can expect more competition in the coming weeks. So, in these cities, just like Kevin Garnett said decades ago, anything is possible,” Yap said.

Parameters based on respondent age, gender, and location were also utilized in the sample formulation in order for the resulting sample to conform more closely to the features of the voting population, as defined by statistics from the Commission on Elections.