No movement in Pres, VP races on PUBLiCUS Mar 30 to Apr 6 survey 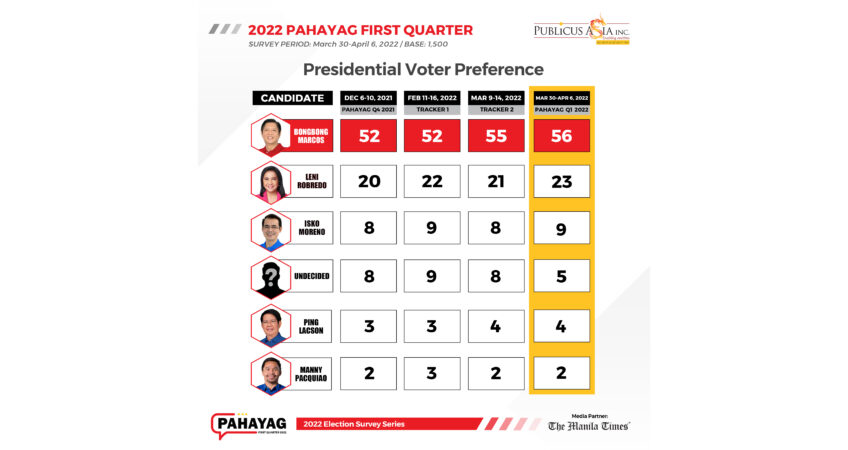 In line with our belief that survey results should be released as close to the survey period as possible to accurately report the state of the race and provide actionable information to voters and candidates for political office, PUBLiCUS is proud to release its March 30 to April 6 national election preference readings with a turnaround time of roughly 48 hours from the end of the survey period.

The results of the March 30 and April 6, 2022 suggest that there has been no movement in the presidential and vice presidential races between the second week of March and the first week of April, with all candidates failing to record statistically significant increases in their respective vote shares against the survey’s 3% margin of error.

Former Senator Ferdinand “Bongbong” Marcos Jr. maintained his lead in the presidential race, earning the support of 56% of the 1,500 registered voters who participated in the PAHAYAG 2022 First Quarter Survey (PQ1).

Marcos, Robredo, and Domagoso notched statistically insignificant vote share increases of 1%, 2%, and 1%, respectively, as compared to their numbers on the March 9-14, 2022 PUBLiCUS survey.

Only 5% of voters said they were still undecided about their presidential vote.

Duterte-Carpio and Sotto notched negligible 1% increases compared to their vote shares on the March 9 to 14 survey. Pangilinan earned a negligible 2% increase, while Ong’s numbers dropped slightly by 2%.

Only 6% of voters said they were still undecided about their vice presidential vote.

PAHAYAG 2022 First Quarter Survey is an independent, non-commissioned nationwide purposive sampling poll conducted by PUBLiCUS between March 30 and April 6, 2022. The 1,500 respondents who participated in the survey were randomly drawn by the Singapore office of American firm PureSpectrum from its market research panel of over 200,000 Filipinos.