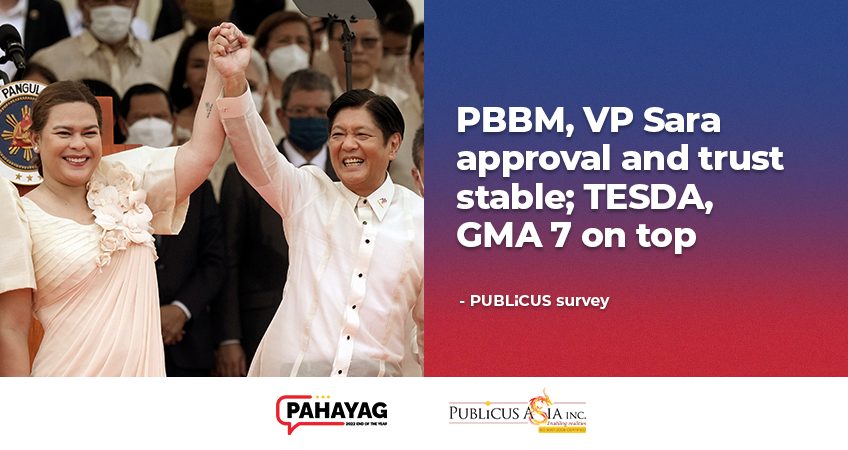 The approval and trust ratings of the country’s top two officials remain stable since last quarter, according to the results of the PAHAYAG 2022 End of the Year (P-EOY 2022) conducted by PUBLiCUS from November 25 to 30, 2022.

64 percent of the 1,500 respondents who participated in the survey said they approve of President Bongbong Marcos Jr.’s performance as chief executive over the past six months. Meanwhile, 57 percent of respondents rated Marcos’ trustworthiness as ‘high’ or ‘very high’.

60 percent of P-EOY respondents also rated TESDA as the most trustworthy institution, with the DepEd (57%) and AFP (57%) tied in second place.

Close thirds are the CHED, Bangko Sentral ng Pilipinas, DOST, DSWD, and DOT, all of which notching at least 50% high and very high trust ratings.

GMA 7 (48%), CNN Philippines (46%), and Philippine Daily Inquirer (40%) sustain top three ranks as the most trusted channel news sources by the respondents. CNN Philippines is stable throughout 2022, unlike GMA 7 and Inquirer, which dropped significantly in the second quarter but managed to recover in the last quarter.

The 1,500 registered Filipino voters who participated in the PAHAYAG 2022 End of the Year Survey were randomly sampled by PureSpectrum, a US-based panel marketplace with multinational presence, from its national panel of more than 200,000 Filipinos. The sample-wide margin of error is +/- 3%.

PAHAYAG is an independent and non-commissioned national purposive survey conducted by PUBLiCUS Asia Inc. PAHAYAG, a CSR program of PUBLiCUS, is released quarterly.