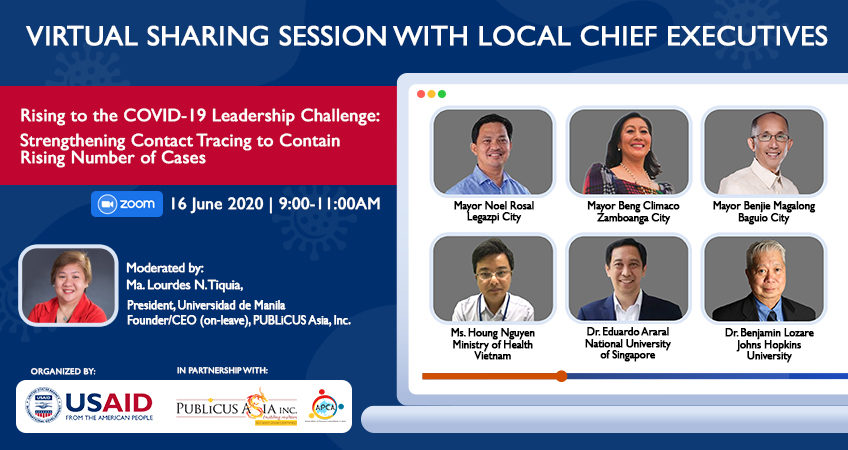 Philippine local chief executives and international experts from East and West converged on Tuesday for the first of four COVID-19 Virtual Learning Sessions organized by the United States Agency for International Development (USAID) in partnership with PUBLiCUS Asia Inc. and the Association of Political Consultants in Asia (APCA).

For Zamboanga City, the support of private sector partners in the execution of LGU-led contact tracing following World Health Organizations (WHO) guidelines were cited by Climaco as a major factor in the city’s swift response to the pandemic.

Given the occurrence of new cases from repatriates, Zamboanga City has ramped up efforts in boosting its COVID-19 testing capacity and has two accredited molecular testing laboratories. Climaco expressed that efforts are underway to establish additional laboratories and recruit skilled personnel to manage testing procedures and quarantine monitoring.

Meanwhile, Rosal pointed to the city’s low infection rate as an indication of the success of the LGU’s contact tracing strategies. According to Mayor Rosal only 29 individuals out of the city’s 200,000 population have been infected, resulting in an infection rate below 0.015%.

Rosal shared that the key to the city’s successful contact tracing is attributable to efficient coordination between the National Task Force and local government units. Strategies are effectively coursed through at the barangay level, especially in the identification of close contacts of positive COVID-19 cases.

Equipped with two (2) testing machines that process at least 600 tests a day, Rosal said mass testing in Legazpi City has led to the early downgrading of quarantine measures of the city.

For his part Magalong—a retired Police Major General—highlighted the importance of seamless collaboration between law enforcement, investigators, and health authorities. Baguio’s contact tracing teams are composed of a doctor or nurse and a law enforcer, which allows the coverage of skills across multiple fields of practice.

According to Magalong, assigning diverse personnel trained in the specific skills needed for contact tracing is critical to successful operations.

“How can you determine whether a person is lying? One thing about investigating a positive case is that most of the people involved will not mention that he came from a critical area. Investigators are trained to spot deceptions which medical authorities do not possess,” Magalong said.

Magalong praised the efficiency of the city’s contact tracing teams in identifying contacts of positive cases, saying their efforts have made up for the limited supply of testing kits available to the city.

Dr. Long Vu of the Ministry of Health Vietnam, Dr. Eduardo Araral of the National University of Singapore, and Dr. Benjamin Lozare of John Hopkins University also gave insights from their experiences overseas.

The Southeast Asian experts reported that lessons learned from the 2003 SARS epidemic proved useful for Vietnam and Singapore as they were able to act swiftly using strategies already tested in the past.

Dr. Long Vu, a representative from the Ministry of Health of Vietnam, shared the successes of immediate action in Vietnam’s efforts to contain the spread of COVID-19. Despite sharing borders with China, community transmission was significantly reduced through the issuance of strict community quarantines and effective containment measures. According to Dr. Vu, a 14-day quarantine is being applied to those coming from outside Vietnam, and are tested twice.

Meanwhile, Dr. Eduardo Araral of the National University of Singapore presented Singapore’s technology-driven achievements against COVID-19. Given that contact tracing is oftentimes manually done for accuracy, technology has complemented this effort and yielded positive results. Singapore has devised a token-based approach in contact tracing which uses Bluetooth and does not require the internet. According to Dr. Araral, this method was conceptualized after realizing that previous applications had low community penetration due to low subscriber rates driven by compatibility problems.

Dr. Lozare highlighted the need to invest in health literacy to inform communities about  basic health concepts they need to know during pandemics.

Tuesday’s session was the first of four Virtual Learning Sessions organized by USAID, PUBLiCUS, and APCA. The virtual sessions are designed as a collaborative space for mayors under the USAID Cities Development Initiative (CDI), selected high-performing non-CDI mayors, and international experts to share, reflect, and learn from each others’ experiences in responding to common and unique challenges posed by COVID-19.