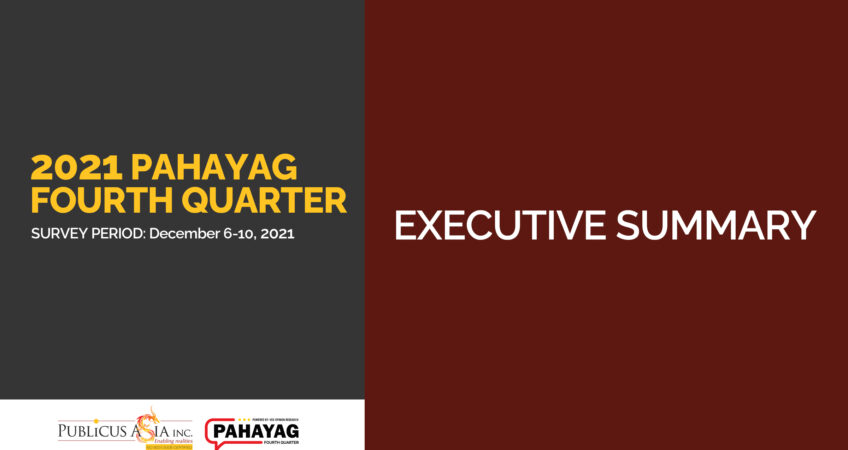 PAHAYAG QUARTER 4 (PHYG-Q4) is an independent and non-commissioned poll conducted by PUBLiCUS Asia Inc. The survey period of PHYG-Q4 ran from December 6 to December 10, 2021.

PHYG-Q4 is a nationwide purposive sampling survey comprised of 1,500 respondents that were randomly drawn from a market research panel by the Singapore office of PureSpectrum, a US-based firm. “PureSpectrum is a US based panel marketplace with a multinational presence. Sample provided by PureSpectrum is not affiliated with any bias or political party. All opinions voiced in the interpretation and analyses of the data is that of the writer and/or project sponsor.”

PHYG-Q4 is made up of six (6) modules: 1) State of the Economy and Economic Prospects, 2) National Issues, 3) Scorecard for National Leaders and Institutions, 4) Emotional Quotient of Incumbent Leaders, 5) Media Consumption Habits, and 6) Election Preferences.

Table 1. State of the Economy and Economic Prospects

Table 4. Issues to Focus On by the President

Note that the comparisons are only applicable for PHYG-Q1 to Q4. This is because their sampling parameters, questionnaire lengths, and field work windows are comparable. The PAHAYAG: FINAL LIST was a markedly shorter survey with a much narrower field work window in order to capture the immediate effects of the last day of substitution. While comparisons can be made with reference to PHYG-FL, it is important to acknowledge the caveats that result from the aforementioned differences.