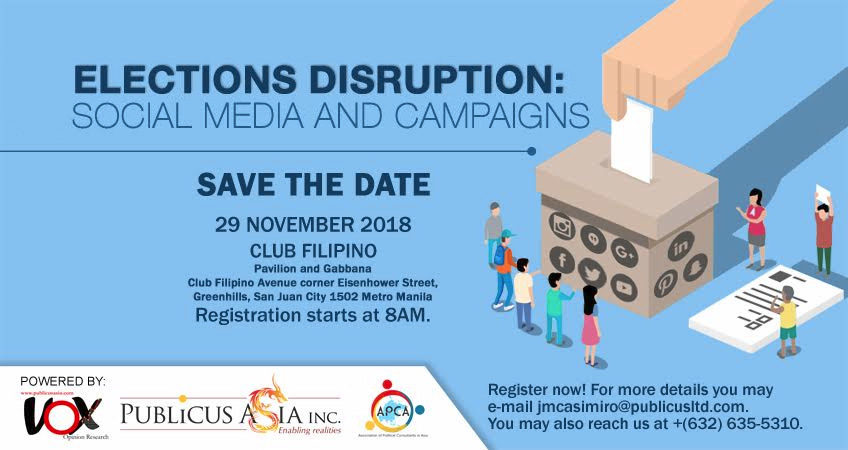 The prevalence of social media in politics has dramatically changed the way campaigns are run and how voters interact with their elected officials.

Social media’s growing role in elections affects candidates and voters alike. Social media’s ability to publish content and broadcast it to millions of people instantaneously allows campaigns to carefully manage their candidates’ images based on rich sets of analytics in real time and at almost no cost. At the same time, social media has made elected officials and candidates for public office more accountable and accessible to voters.

As the 2019 midterm elections is fast approaching, it is relevant to discuss how social media is changing democracy, elections and campaigning in the Philippines. It is in this regard that PUBLiCUS Asia, Inc., in partnership with the Association of Political Consultants in Asia (APCA), is hosting “Elections Disruption: Social Media and Campaigns,” a forum that will discuss the role of social media and technology in shaping political campaigns, on November 29, 2018 (Thursday) from 9:00 AM to 1:00 PM at Club Filipino, Club Filipino Avenue cor Eisenhower Street, Greenhills, San Juan City. Experts in the field of technology, the academe, and the government will discuss how social media has been as disruptive in politics as in every other sphere of life.

Also in the said forum, PUBLiCUS Asia Founder/CEO Malou Tiquia will be presenting the results of the independent Pahayag NCR survey, which looked into the sentiments and insights of National Capital Region respondents on relevant national issues. The study was conducted last November 16-20 among 1,800 registered voters from the 16 cities and lone municipality in NCR.

The PAHAYAG NCR poll is one of the series of PUBLiCUS Asia’s geographic studies, with the goal of providing better assessment and drilling down of the differences in opinion among Filipinos across the country and delve into the intricacies of the Philippine island groups.
PUBLiCUS Asia – known to be a disruptor in the field of polling – has upgraded its research arm by shifting from the traditional pen and paper interviews (PAPI) to computer-assisted personal interviewing (CAPI) data collection method. With its commitment to elevate political discourse in the country, PUBLiCUS Asia started a series of independent polls with Pahayag Online in November 2017 and Pahayag Luzon in June 2018.

PUBLiCUS Asia has developed its own mobile survey application known as VOX Survey designed to deliver a fast-turnaround for survey results and provide a more accurate, more actionable picture of what the people think.

For more information on the forum or to register, click here: https://www.publicusasia.com/elections-disruption.