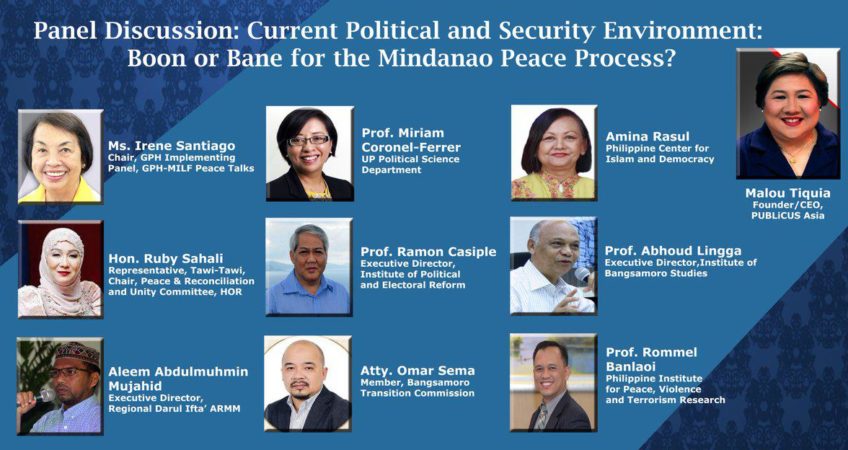 The discussion centered on violent extremism, Martial Law, security challenges and the peace process as well as federalism and the Bangsamoro Basic Law (BBL). There was agreement in the panel for the immediate passage of the BBL for change the narrative of #Marawi. Prof. Lingga emotionally talked about the people’s frustration in Muslim Mindanao. He pointedly spoke of the “need to change the narrative of extremism by showing results and not debate on the texts of the Quran and that peaceful means need to be supported.” Mr. Mujahid on the other hand, raised the issue of “freedom of religious thought, in particular Islamic thought since tolerance is the only antidote to extremism.”

Rep. Sahali emphasized on the need to look into ourselves and find the solution jointly instead of blaming one another for what happened in Marawi. “the community has a vital role to play in battling extremism.” She sought the support of the advocates for peace to push for the approval of the BBL, pointing that the “Php70 billion block grant could go far in truly making Muslim communities develop.” Rep. Abdullah Dimaporo of Lanao del Norte, who was in attendance, stressed to all that “extremism and terrorism are not one and the same.” He further called for more “understanding and engagement so that we understand our respective cultures.”

Prof. Ferrer raised the issue of moving forward and institutions are vital in rebuilding Marawi. Who will take the lead in rebuilding? How would it be done? Where are the plans and what are the timelines? “These are important because we need results.” Prof Banloi informed the audience that what happened in Marawi is “not just Mautes. There are multiple groups. They hold and control territories; they practice Sharia law of ISIS and they use Social Media (SM) in recruiting and propagating their beliefs. Banloi talked about profiling being done in SM which aids the various groups in securing recruits and fresh members. Mr. Casiple spoke of containing the spread of extremism and the role of Martial Law in doing so while Atty. Sema informed the advocates that Bangsamoro Transition Commission has already completed their draft BBL and will be ready to submit the same to President Duterte.

Pro PolitiCS for Peace is a 3-year project that seeks to help shape a stable political environment in support of the Mindanano peace process. It engages political leaders in dialogue, capacity-building, researches and studies to enhance their informed and principled participation in the crafting and implementation of the roadmap and processes for sustainable peace and development in Mindanao. The program was implemented by IAG in partnership with the Local Government Development Foundation, Philippine Center for Islam and Democracy, Zamboanga Integrated Development Alliance, Inc. and supported by the Australian Aid.