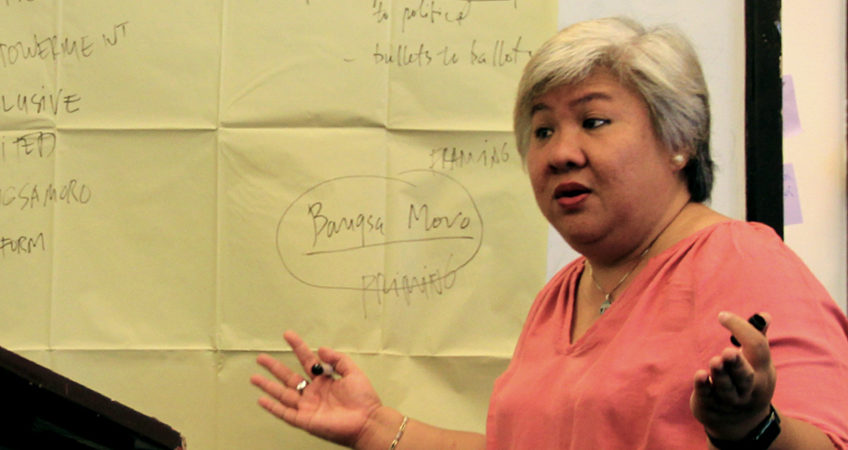 Last May 15-16, 40 members of the Moro Islamic Liberation Front (MILF)-United Bangsamoro Justice Party (UBJP) were trained to identify, understand, and appreciate the components of effective communication skills as key to a winning campaign. PUBLiCUS Asia Founder/ CEO Ma. Lourdes N. Tiquia lead the training and challenged the MILF-UBJP to be proactive in correcting the negative perception of the public on the Bangsamoro and its people.

The two-day seminar-workshop was held at the Waterfront Insular Hotel, Davao City. It was an advanced-level training activity focused on providing MILF-UBJP members with a broad set of communication skills to effect progress via strategic communications.

Tiquia, who is a renowned political strategist trained the participants to explore the communications process, examine the current styles and identify effective approaches. “Communication is an essential leadership skill and a building block in a successful organization,” Tiquia said.

Tiquia introduced the concept of a systematic framework. She said effective communication is both an art and a science – to be studied, it needs to be understood, to be understood, it needs to be broken down. Tiquia also used the “Who-Why-Why” method, saying it is only through knowing one’s identity, capabilities and motivations that one can break down barriers to effectively communicate.

The seminar also provided UBJP members with strategic political communication skills to champion their ‘bullets to ballots’ narrative, correct negative and wrong public perception on the Moro people, and most importantly help educate the public on the peace and development objectives of the political party in line with its vision of a self-governing Bangsamoro.

Ultimately, Tiquia reminded the participants that the MILF’s evolution from an armed revolutionary group into a political organization is their identity and should be the core of their party’s narrative. “There’s no better way to communicate with the public than being able to show them exactly what your genuine story is all about: Revolutionary.”