During the Virtual Presser on the NCR COVID-19 Online Panel Survey, PUBLiCUS Asia, Inc. released the following table reporting the Approval of Metro Manila mayors and city governments among the panelists: 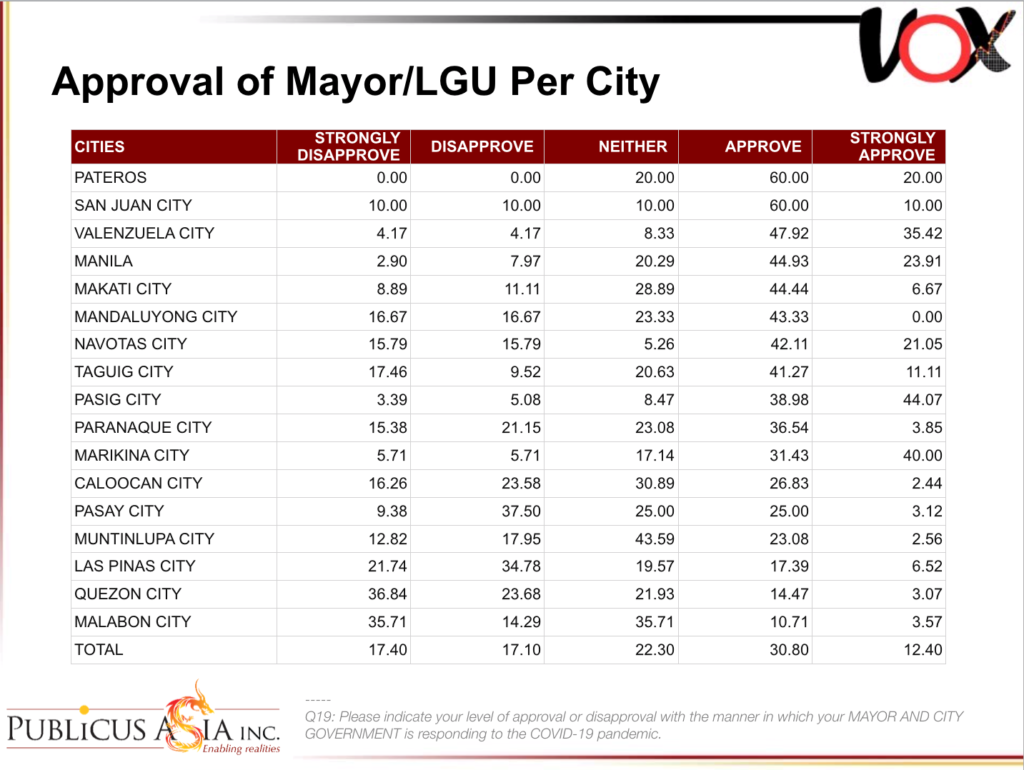 We must point out that the official PUBLiCUS table above is entitled “Approval of Mayor/LGU per City.” In fact, the Local Chief Executives were not named and the question asked on the questionnaire was:

Q19: Please indicate your level of approval or disapproval with the manner in which your MAYOR AND CITY GOVERNMENT is responding to the COVID-19 pandemic.

This indicates that what is being measured here is approval or disapproval on both the mayor and the institution as a whole. In a crisis, this is not just about the mayor but the whole bureaucracy of the city hall which he or she leads.

After the Virtual Presser, a user-generated chart began circulating on the Internet using the data we provided in the above table. It was entitled “Net Approval Ratings of Metro Manila Mayors”, with the source identified as “PUBLiCUS Asia Inc. (2020)”.

We would like to clarify that the “Net Approval” chart circulating on the Internet and shared in various Viber groups was not generated or authorized by PUBLiCUS in any way. It is an independent interpretation made of our data by other people.

Although we appreciate that the data we provided have fueled political discourse on the approval and performance of mayors in dealing with the extraordinary COVID-19 crisis facing us all, we would like to take this opportunity to clarify that PUBLiCUS does not subscribe to using Net Approval as a standalone metric for measuring approval and disapproval of public officials and government institutions.

As we can see, the table above shows to the reader that we had a scale of approval ratings. These were: Strongly Disapprove / Disapprove / Neither / Approve / Strongly Approve. There is nothing on Net Approval in the question itself. Net Approval is calculated by deducting disapproval from approval.

The position of PUBLiCUS is that Net Approval by itself does take into consideration the nuances of approval and disapproval among the sample population, or panel in this case. Therefore, it cannot serve as a standalone indicator of perceived job performance.

We do note that Net Approval was incidentally referenced on a limited basis in the Executive Summary and Media Deck of the NCR COVID-19 Survey as a secondary metric for the sole purpose of gleaning additional insights from the primary approval/disapproval metrics based on income group classification. For clarity moving forward, PUBLiCUS will no longer make any reference to Net Approval in succeeding reports of its NCR COVID-19 Survey, which is set to run once a week until the end of April.

Instead of the spurious Net Approval chart circulating on the Internet, we ask that the general public instead refer to the following charts and tables on Mayor/LGU Approval which were generated by VOX Opinion Research’s automated data visualization suite but did not make the final cut for the Executive Summary and Media Deck: 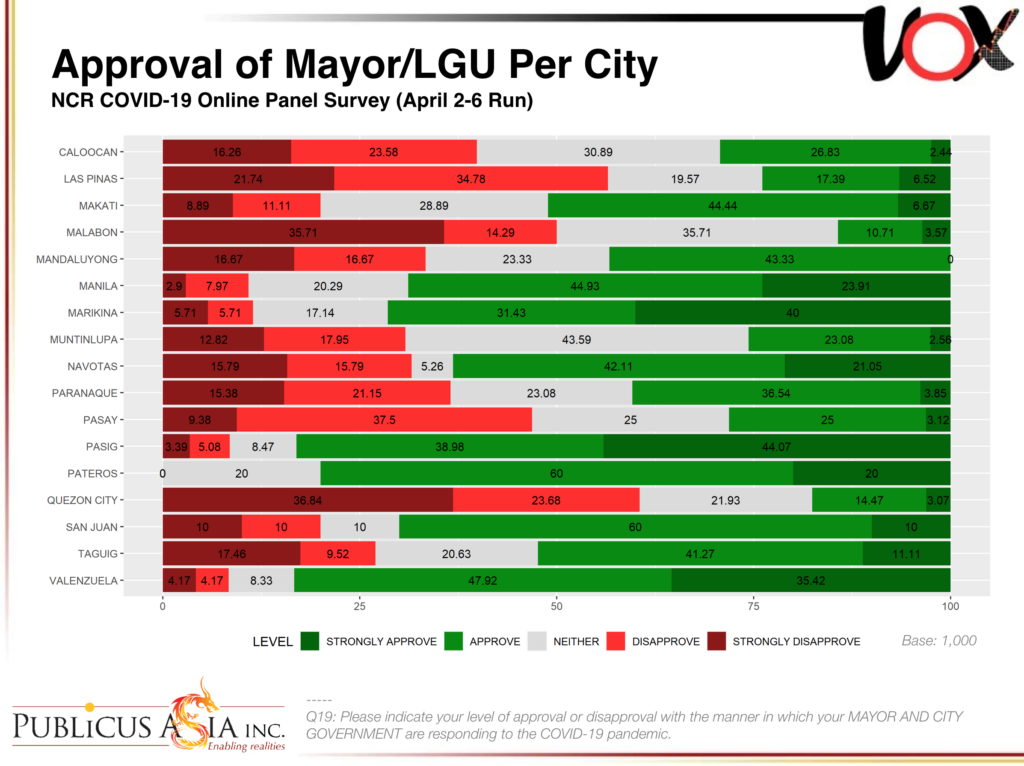 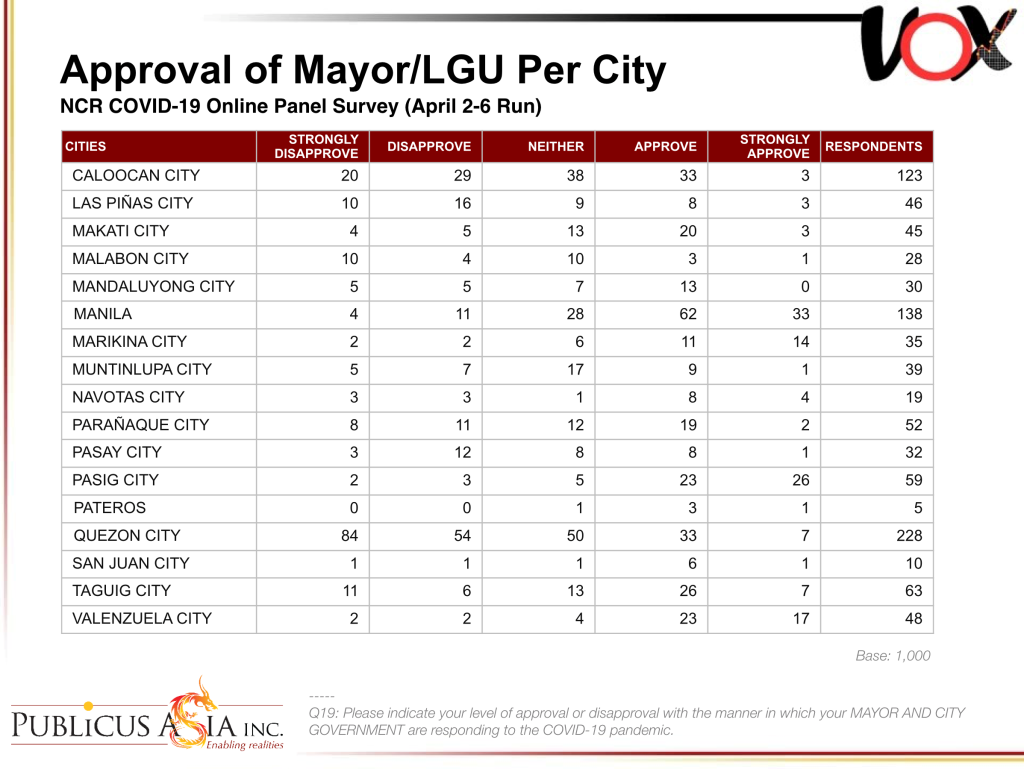 In closing, I would like to stress the words of PUBLiCUS Founder and CEO on-leave, Malou Tiquia:

“The aim of PUBLiCUS in reporting public opinion on local government performance is to provide LGU officials from the Office of the Mayor down to the rank-and-file with objective data that can be used to improve their anti-COVID-19 operations and produce better governance outcomes for constituents during these trying times – as well as acknowledge the incipient best practices which will gain a better foothold as we move forward.”