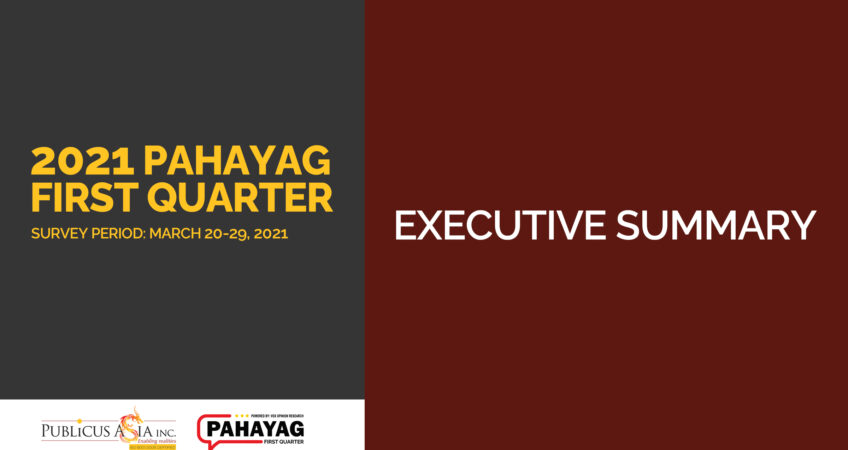 PAHAYAG-QUARTER 1 (PHG-Q1) is an independent and non-commissioned poll done by PUBLiCUS Asia Inc. covering the period of 20-29 March, 2021. It is a nationwide purposive sampling survey comprised of 1,500 respondents drawn from an online research panel of approximately 100,000 Filipino registered voters maintained by a Singapore-based firm.

Senator Pacquiao registered the highest total approval rating among incumbent senators at ~66%. Senator Go and Senator Poe trail behind with both hovering around 48%. Senators Villar, Revilla, and De Lima remain the most unpopular with total disapproval ratings ranging from 47% (Villar) to 67% (De Lima).

President Duterte is viewed by many as brave. Moreover, he notched the highest shares for most of the positive traits mentioned. These include: (1) Love for the Philippines, (2) Concern for Filipinos, (3) Responsibility, (4) Pro poor, and (5) Sincerity.

The top five choices for president remain unchanged from the PAHAYAG-EOY survey (December 3-9, 2020). They are again: Sara Duterte, Isko Domagoso, Bongbong Marcos, Manny Pacquiao, and Leni Robredo. Given the numbers at present, no frontrunner can be readily identified.