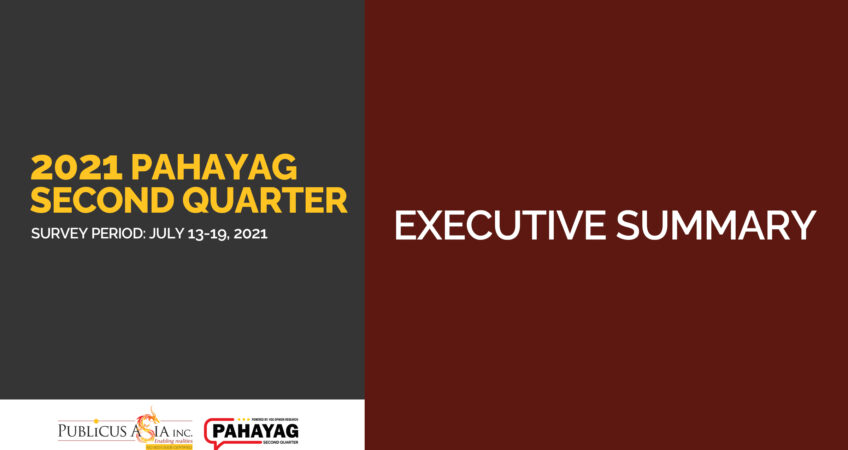 PAHAYAG-QUARTER 2 (PHYG-Q2) is an independent and non-commissioned poll done by PUBLiCUS Asia Inc. covering the period of 13-19 July, 2021. It is a nationwide purposive sampling survey comprised of 1,500 respondents drawn from a research panel of approximately 100,000 Filipino registered voters maintained by a Singapore-based firm.

The majority of the respondents expect some improvements in their financial situation heading into the third quarter of 2021. This could be partly attributed to slowing inflation and increased spending from both the public and private sectors. Results also hinted at some level of socioeconomic redistribution with clear winners and losers.

President Duterte suffered a noticeable drop in total approval from 65% to 58%. This is a departure from his longer-term trend, but still registered the highest total approval rating. Vice President Robredo managed to arrest the drop observed in the previous survey and went from 29% to 32% which is more in line with her longer-term numbers.

The approval of Senator Pacquiao plunged from 66% to 37% over the last quarter. Moreover, his disapproval rating surged from 12% to 35%. In contrast, Senator Gordon increased his approval rating by 7%.

President Duterte is perceived by many as brave, decisive, and has love for the Philippines. On the other hand, Vice President Robredo is viewed as religious and sympathetic or kind. The sharp contrast in traits between the two remains.