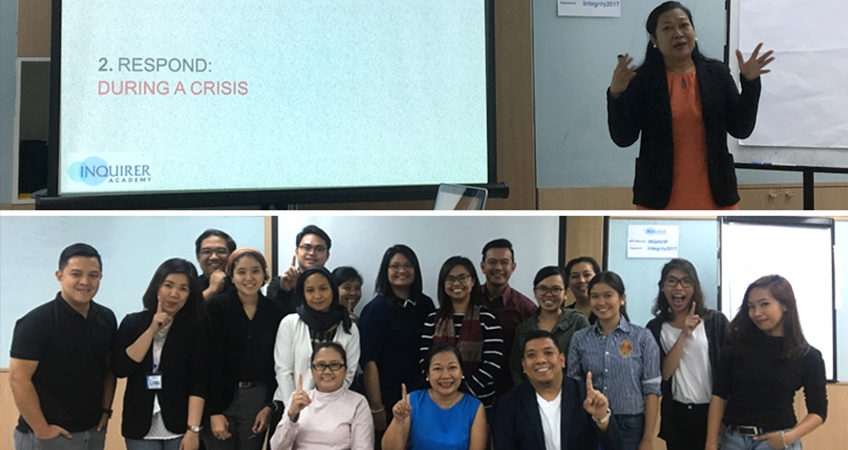 Today, everybody is a citizen journalist.

That was the opening statement of Philippine Daily Inquirer (PDI) Vice President Connie Kalagayan during the workshop titled “Issues and Crisis Management: Responding to Traditional and Social Media during Issues and Crisis” held at Inquirer Academy, Makati City last July 13-14, 2017.

PUBLiCUS Senior Staff for Strategic Communications Leluck R. Reyes attended the workshop to broaden her knowledge in crafting key messages, facing the media using new methods and styles in media engagement, and responding to stakeholders via the right platforms in what is now called the “social media” age. According to Kalagayan, netizens post contents that they think are newsworthy and would go viral is now considered a habit. The only objective is to gather likes, shares and comments, without realizing if the post is detrimental to a person or a company.

Attended by communications practitioners from different industries, the participants were reminded that even before the age of social media, the key in addressing an issue or a crisis is by responding with key messages, namely: narrative of what happened, an apology, and the branding. The only difference is, in today’s world, the response should be really fast, yet, should still answer the issue directly. Kalagayan also added “sometimes, letting go of the issue is another way of responding.” It is also important to learn how to evaluate issues that have potential to cause damage to a company or an organization.

The participants, who were divided into three groups, were tasked to come up with a “worst nightmare” that could happen to their respective companies or organizations. Each group is asked to draft a press statement, strategize the response to a crisis, and identify venues to communicate the key messages. A mock press conference was also conducted as a conclusion of the workshop. Each group answered pressing questions from PDI’s senior reporters Nancy Carvajal and Marlon Ramos.

PUBLiCUS regularly sends its management and employees to different seminars and workshops wherein they can be updated with the latest technologies and techniques, and enhance their skills not only as an employee, but also for career and personal growth.