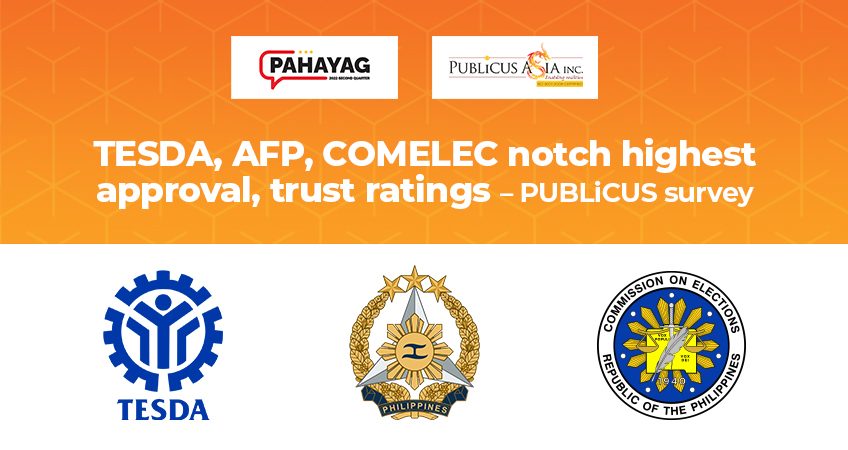 The Technical Education and Skills Development Authority (TESDA), Armed Forces of the Philippines (AFP), and Commission on Elections (COMELEC) received the highest approval and trust ratings among respondents to the PAHAYAG 2022 Second Quarter survey conducted by PUBLiCUS Asia Inc. from June 16-22, 2022.

72 percent of respondents said they approve or strongly approve of TESDA’s overall performance throughout the Duterte administration. AFP and COMELEC notched total approval ratings of 69% and 66%, respectively, for their performance from June 30, 2016 until present.

“All other agencies generally fared reasonably well, with the lowest rated agencies still managing to receive total approval ratings that outstripped their total disapproval ratings,” PUBLiCUS noted in the executive summary of its second quarter survey.

Meanwhile, the Armed Forces of the Philippines was rated the most trustworthy government institution. 63% of respondents said the trustworthiness of the military was ‘high’ or ‘very high’ throughout the term of outgoing President Rodrigo Duterte.

The 1,500 registered Filipino voter respondents who participated in the survey were randomly sampled by PureSpectrum, a US-based panel marketplace with multinational presence, from their national panel of more than 200,000 Filipinos. The sample-wide margin of error is +/- 3%.

The Executive Summary of the 2022 PAHAYAG Second Quarter survey may be viewed here: https://www.publicusasia.com/executive-summary-2022-pahayag-q2/