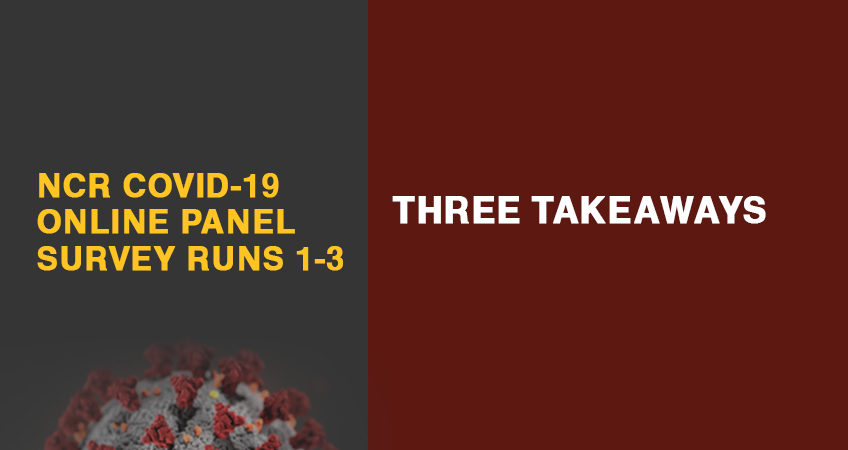 Between early April and early May 2020 PUBLiCUS Asia, Inc. and VOX Opinion Research conducted three separate runs of the independent non-commissioned NCR COVID-19 Online Panel Survey: April 2-6, April 13-18, and May 5-8. The survey was designed to track perceptions and sentiments of Metro Manila panelists on a wide range of COVID-19 related indicators for the duration of the Enhanced Community Quarantine in Manila (March 16 to May 15, 2020). Our primary aim in launching this survey was to provide timely and reliable actionable information to government decision-makers, thought leaders, the media, and the Filipino citizenry at-large about public opinion on COVID-19 related issues in Metro Manila—the epicenter of the pandemic in the Philippines.

Approval for the Luzon-wide (and eventually Metro Manila-wide) Enhanced Community Quarantine remained sky-high throughout all three survey runs, increasing from 82% in the April 2-6 survey to 84.2% in the April 13-18 survey before reaching a high of 85% in the final survey run conducted from May 5-8. 73% of respondents to the May survey also approved of an additional extension of the ECQ in Metro Manila past May 15, 2020. These results suggest that support for the ECQ grew over time among Metro Manila panelists—implying that our panelists understood the necessity of imposing such restrictive measures in the face of the deadly pandemic. 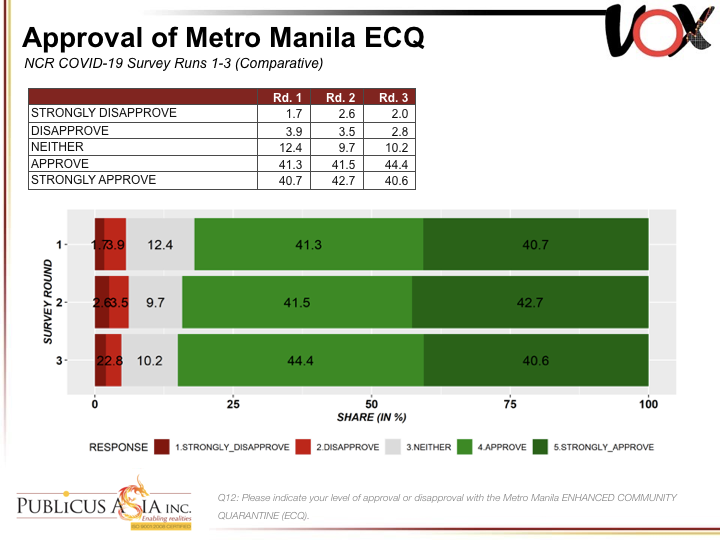 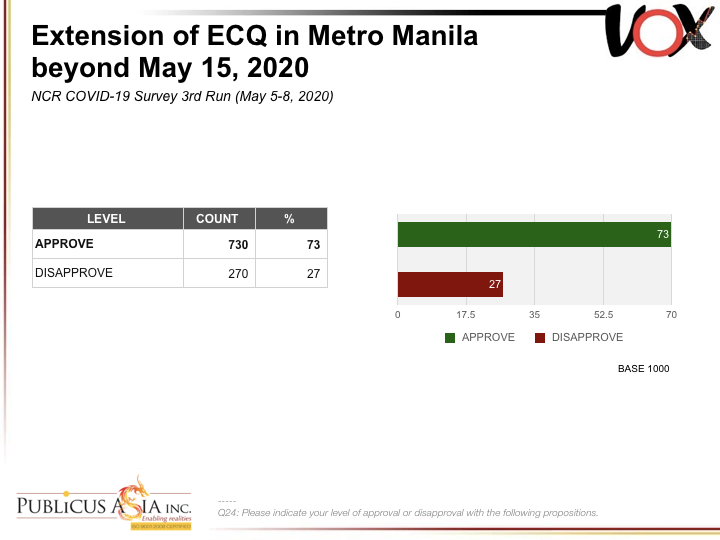 As popular as the ECQ was, however, the data also suggest that the harsh policies of the lockdown had a negative impact on the welfare of Metro Manila households. The proportion of panel households reporting Bad or Very Bad family conditions rose steadily throughout the

three rounds of the survey, from 15% during the April 2-6 run up to 19.3% during the May 5-8 run. The proportion of panel households reporting Good or Very Good family conditions also dropped by 3.1% between early April and early May. 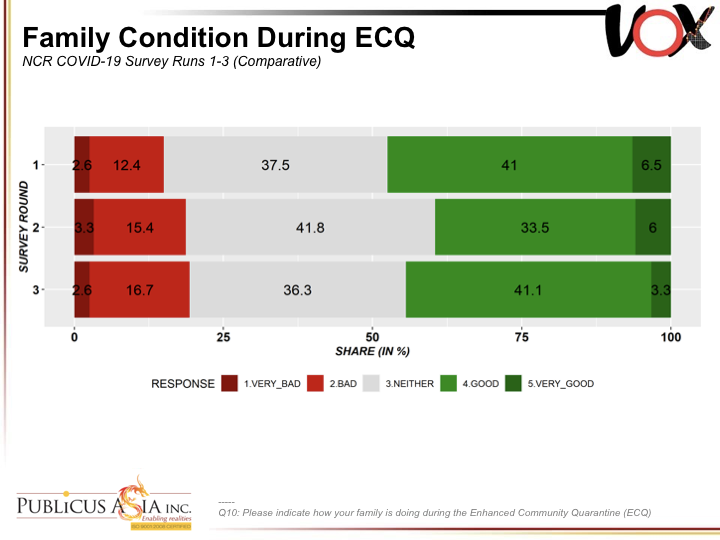 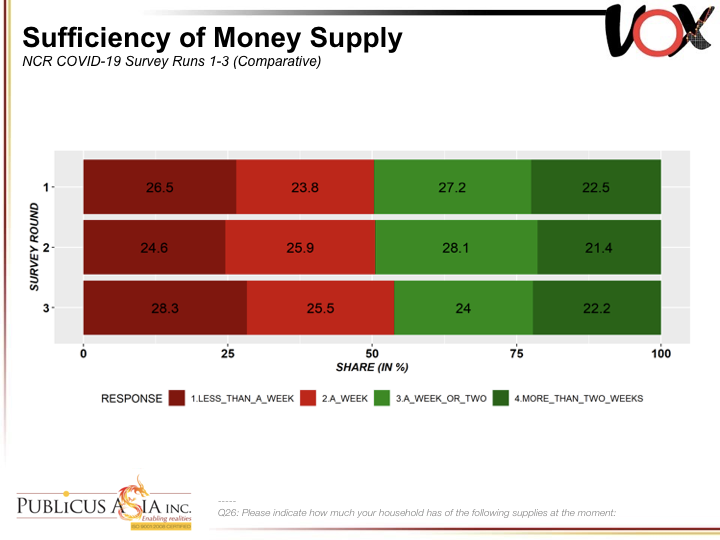 The data also show that the money supply of panel households became less sufficient over time, with the proportion of households reporting a money supply sufficient for only a week or less growing from 50.3% between April 2-6 to 53.8% in the May 5-8 survey. These numbers are evidence that the ECQ eroded household savings among Metro Manila panelists.

Meanwhile, the data also point to an alarming incidence of ECQ-caused unemployment among panel households. 69.2% of respondents to the May 5-8 survey reported that at least one member of their household had lost his or her job due to the ECQ—a 5.2% increase from the April 13-18 survey. It appears likely that unemployment will be a serious issue in Metro Manila moving forward, even as we begin the multi-phase reopening of the economy. 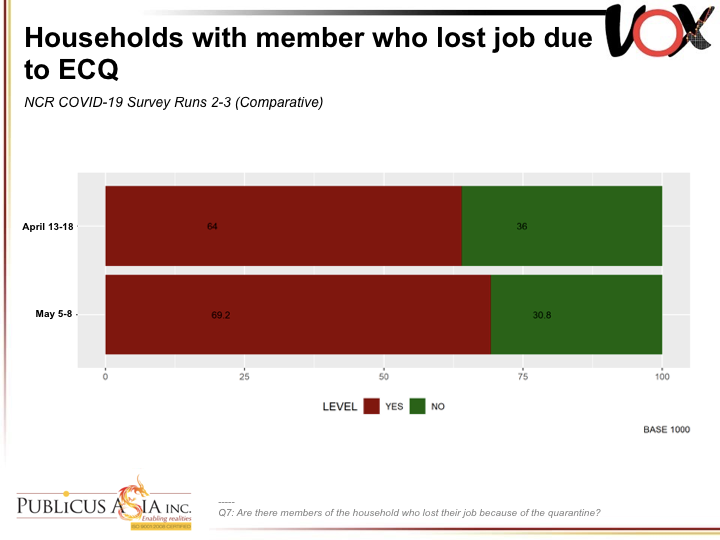 All in all, these findings point to a conclusion that while the re-imposition of the most strict lockdown measures in response to a potential relapse or surge of COVID-19 cases in Metro Manila would likely be met with little public opposition, a second full-on ECQ in Metro Manila would likely cause severe damage to the regional economy and the welfare of households. This indicates that the government’s public health efforts to contain and stamp out COVID-19 in Metro Manila should be geared towards avoiding the worst-case scenario of a re-imposition of the ECQ or similarly restrictive quarantine protocols.

Approval of the respective COVID-19 responses of mayors and LGUs increased over time while disapproval decreased over time. The numbers suggest that the panel’s perceptions on Mayor/LGU performance improved significantly over time. 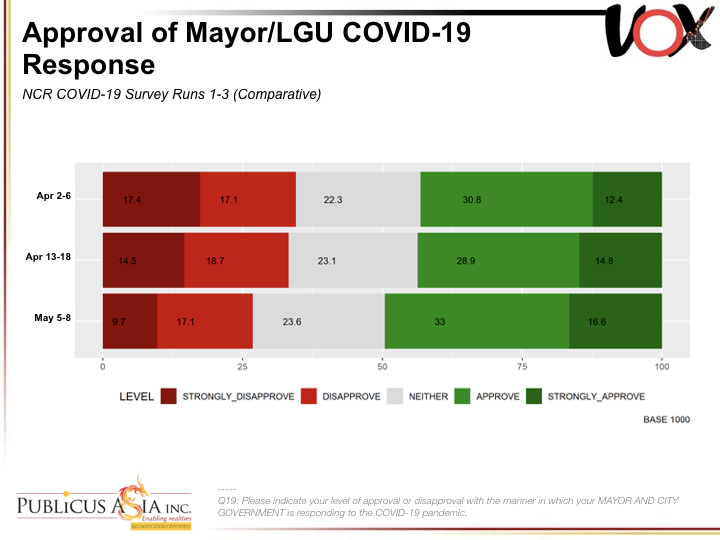 It is reasonable to infer that growing approval of the performance of NCR mayors and LGUs in combating COVID-19 is at least partly linked to the observed improvement in delivery of relief goods and services to panel households. During the April 13-18 survey we began asking respondents whether they had received food/relief packs from their respective LGUs. 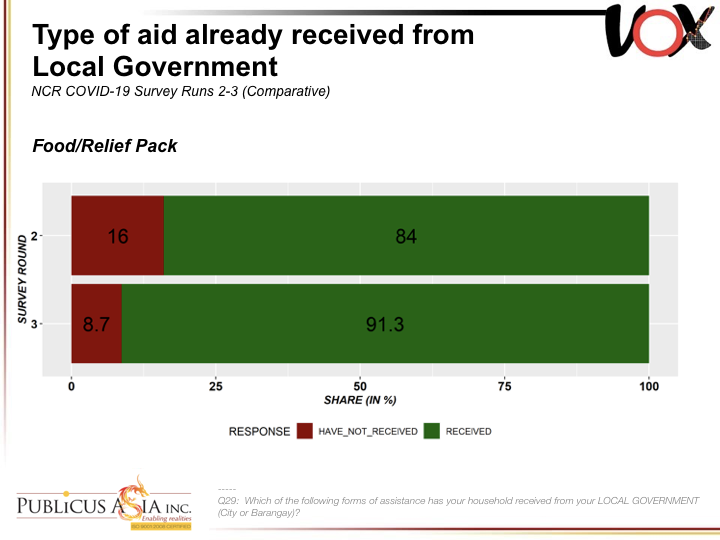 The proportion of respondents who received food/relief packs grew by more than seven percent between mid-April and early May. This implies that LGU-based delivery mechanisms required some time (two weeks or more—depending on the LGU) to adjust to the high demand for relief goods created by the pandemic.

Another factor which may have contributed to the increase in Mayor/LGU approval over time could be implicit competition fostered among NCR mayors and city governments by the public release of their approval numbers in our survey. The most widely-discussed findings of the NCR COVID-19 Online Panel Survey were the Mayor/LGU approval ratings. Netizens took to social media in the thousands to congratulate high-ranked mayors and ridicule the ones lagging behind. The resulting political noise caused certain sectors to question the wisdom of conducting this type of polling during a pandemic.

However, the improved performance of mayors and LGUs between the first and last surveys proves the merit of conducting public opinion research during times of crisis and reporting the results for all to see. The public pressure generated by the public release of these approval ratings seems to have pushed several LGUs to step up their game and launch innovative COVID-19-related programs and services. These efforts appear to have been acknowledged by our panelists, resulting in higher approval ratings for many of these LGUs. This is why we poll during times of crisis—so that the voices of the people will be heard and acted upon by the officials who represent us in government.

Fostering a culture of friendly competition among Metro Manila LGUs appears to be a value-adding pursuit for public governance stakeholders. We can imagine how much it would benefit Metro Manila residents if their respective city governments would engage in a cooperative ‘race-to-the-top’ with one another to improve governance outcomes, not only for COVID-19 but for a wide range of local governance issues. A culture of competitive governance may be the cure we have been searching for to heal the political ailments of the national capital.

In any case, with less than two years left before the May 2022 elections—campaign season is officially open. The performance of local chief executives in responding to the COVID-19 pandemic will likely decide which incumbents will win re-election and which will find themselves unemployed after May 2022. While some of the top-performing NCR mayors may be swept into national office on the tailwinds of their success, the ones who have proven ineffective in the fight against COVID-19 will likely have to fight for political survival. Only time will tell how the cards will fall, but for now it is safe to say that COVID-19 will be the defining issue of the next election cycle.

During the final survey in May we asked respondents which leader and institution were most responsible for the containment of COVID-19 during and after the Enhanced Community Quarantine. 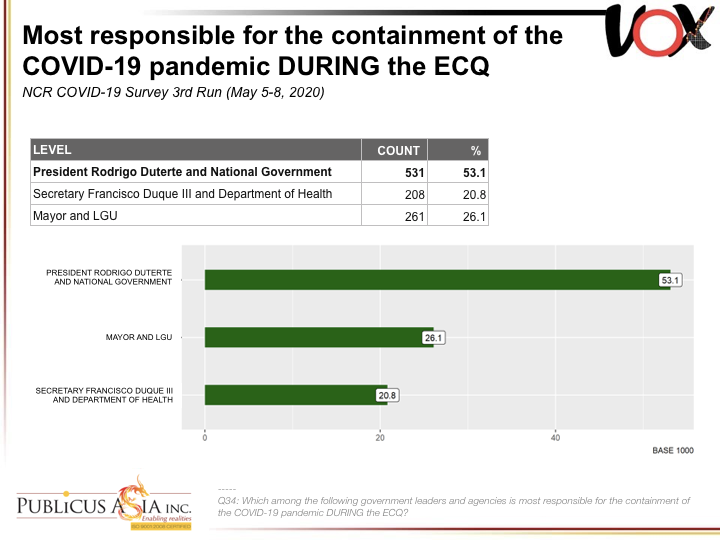 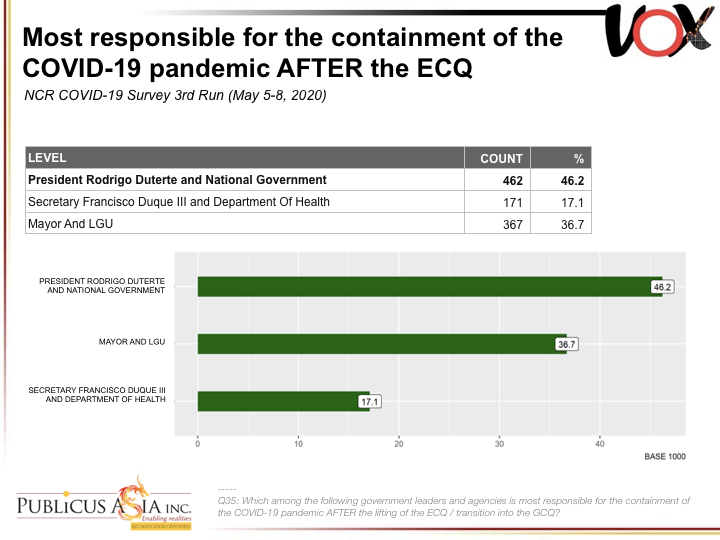 The data suggest that Metro Manila residents will continue to scrutinize the performance of the President Duterte and the National Government in responding to the COVID-19 pandemic as National Capital Region shifts to General Community Quarantine. While the performance of local chief executives and their respective city bureaucracies will still play a major role in fighting COVID-19, it appears that the Duterte administration will continue to shoulder the greatest burden of expectations in NCR.

It will be interesting to see how lower expectations will affect public perception of the Duterte administration’s performance moving forward. As of now, the data do not suggest a relationship between lower confidence and approval. The six-point drop in confidence between April 2-6 and May 5-8 actually coincided with a marginal 1.2% increase in approval of the manner in which President Duterte and the National Government are responding to the COVID-19 pandemic. 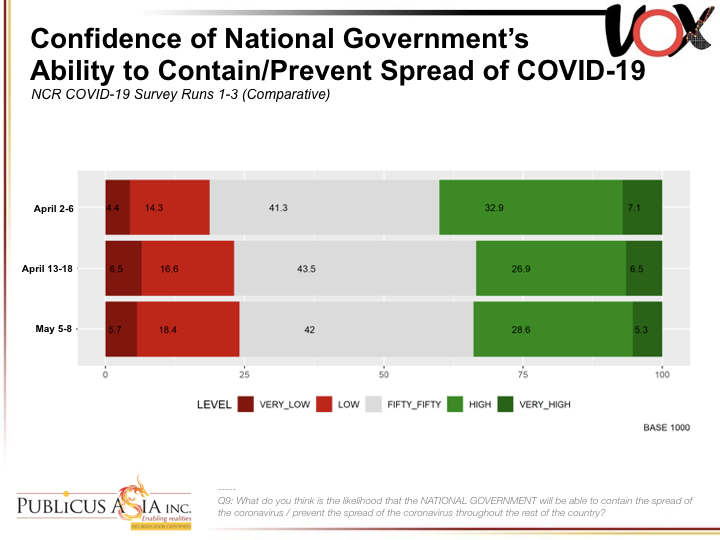 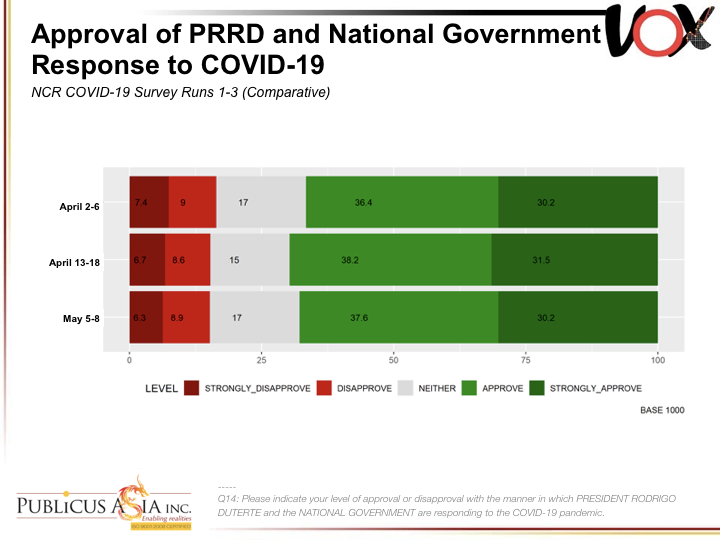 In any case, the Duterte administration’s ability or inability to live up to this challenge will greatly affect the playing field for 2022. Sustained success in beating COVID-19 would bolster the President’s endorsement power for his anointed successor, whoever they may be. Failure would leave the presidential race wide open for independents or even opposition figures who have built strong track records of fighting and beating COVID-19 within their respective jurisdictions and spheres of influence.