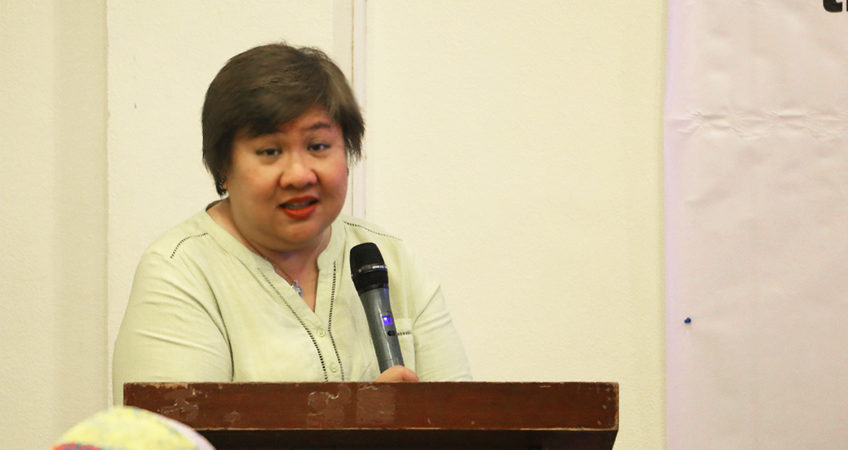 Davao City – Founder and CEO of PUBLiCUS Asia, Inc. Malou Tiquia stressed the importance of coming together as a united team in rallying the passage of the Bangsamoro Basic Law (BBL) in the Basic Leadership Seminar: Empowering the Women Leaders of the Bangsamoro conducted by DELACSE Bangsamoro on September 6 – 7, 2017. Moreover, BBL proponents need to expand beyond the Muslim constituency to widen and strengthen support base for the bill.

Tiquia gave the women leaders a background and update of the Philippine political situation and its implication to the Mindanao peace process.

Senate President Koko Pimentel and House Speaker Pantaleon Alvarez included the BBL and Federalism in their respective statements on their priority bills but in the Common Legislative Agenda approved by the Legislative-Executive Development Advisory Council (LEDAC) in August 29, 2017, only Federalism made it to the list.

The Bangsamoro Transition Commission’s (BTC) version of the BBL has been transmitted to Congress but to date, no solon has agreed to sponsor the bill. Former President and now Pampanga Representative Gloria Macapagal-Arroyo filed H.B. 6121 – the Basic Act for the Bangsamoro Autonomous Region (BABAR) – on August 3, 2017.

The BBL may not have been certified urgent but it has definitely not been erased from the legislative agenda. President Duterte, who currently enjoys a huge amount of political capital, proclaimed that he will “husband the bill.” Last month, Majority Floor Leader Rep. Rodolfo Fariñas said that “passage of the BBL will have to go first so that should the BBL have provisions that may be unconstitutional, the Constitution may be amended once Congress convenes in a constituent assembly (con-ass)…”

The worst thing that could happen to the BBL is to be deemed unconstitutional by the Supreme Court. It would be back to the drawing board for everyone if this happens, according to Tiquia. The legislative and executive branches of the government are carefully working on the BBL to prevent this from happening. Undersecretary Ryan Estevez of the Presidential Legislative Liaison Office under the Office of the President wrote in his letter to the Senate President that they trust the “collective wisdom of Congress should they deem proper to refine the draft further in the course of the regular legislative mill in order to reflect the genuine aspirations of the Filipino people.”

Tiquia advised the Muslim women participants that if they want the BTC’s draft to progress in the legislative branch, they must work together to communicate to a bigger constituency. “More Filipinos supporting this bill means more chances of passing,” she said.

She also advised them to get a good grasp of the procedural and substantive issues of the BBL. This means familiarizing themselves with the solons who are members of the Standing Committees working on BBL. They also need to identify, review, and address controversial provisions of the previous BBL draft.

BBL and federalism are interconnected. “You mess up one, you mess up the other,” Tiquia noted. But one thing is certain – a solon has to sponsor BBL submitted by the BTC for it to move forward.

The Basic Leadership Seminar: Empowering the Women Leaders of the Bangsamoro was held at Microtel, Davao City and organized by the consortium Konrad Adenauer Stiftung (KAS) Philippines and the Institute for Autonomy and Governance.